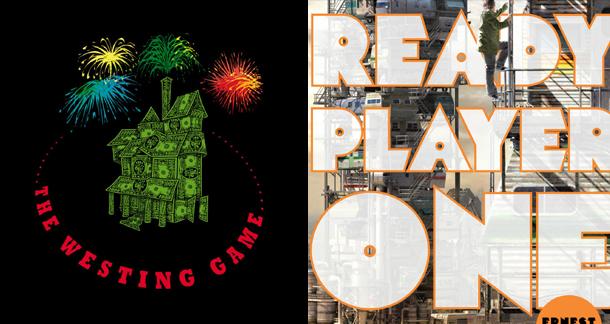 Ellen Raskin’s The Westing Game turns thirty this year. That's three decades of inspiring later books and younger authors with its cheeky clues, cast of wildly diverse weirdos, and ever-twisting plot. And no book seems as directly inspired by The Westing Game as Ernest Cline’s Ready Player One, the big-budget adaptation of which is hitting theaters today, directed by a little nobody named Steven Spielberg.

The two books feel like the same story told for two different generations, with Ready Player One operating as the fast-paced, hyperkinetic, millennial version to Raskin’s more sedate, Generation X whodunit. Both narratives begin with a lonely, overlooked child (The Westing Game’s Turtle Wexler, and Ready Player One’s Wade Watts) whiling away the days in a vaguely futuristic vertical domicile in the Midwest. Turtle lives in Sunset Towers in Wisconsin, the posh new digs with one-way windows and all the latest amenities. Wade lives in Oklahoma’s The Stacks, a crime-ridden pile of dozens of trailer homes stacked on top of one another and held together by metal beams, the result of overpopulation and the prohibitive cost of horizontal real estate.

And both books kick off their action with the death of a wealthy, reclusive man: Raskin’s Samuel Westing and Cline’s James Donovan Halliday. Westing and Halliday each will their respective fortunes to whomever can solve their labyrinthine puzzles. Westing wants his players to suss out his murderer; Halliday asks that competitors retrieve the Easter egg he’s embedded deep in the OASIS, the virtual reality world of his creation. The ensuing plots follow Turtle, Wade and their friends and foes as they solve riddles, deduce clues, hazard guesses, and try to make their way to the brain-twisters’ finish line before any other competitor, so they can win the game and pocket the fortune (two hundred million in The Westing Game; two hundred forty billion in Ready Player One).

Even the benefactors’ wills are similar. The thrilling flourish ending Samuel Westing’s last testament in The Westing Game reads as follows:

I, Samuel W. Westing, hereby swear that I did not die of natural causes. My life was taken from me – by one of you! […]

Who among you is worthy to be the Westing heir? Help me. My soul shall roam restlessly until that one is found. The estate is at the crossroads. The heir who wins the windfall will be the one who finds the fourth […]

So take stock in America, my heirs, and sing in praise of this generous land. You, too, may strike it rich who dares to play the Westing game.

Exciting, no? And here’s how Halliday ends his own will, with an equally dramatic call to arms:

Wherein the errant will be tested for worthy traits

And those with the skill to survive these straits

Will reach The End where the prize awaits

The Westing Game and Ready Player One each take on the narrative structure of a game, and not only the plot-propelling game of their titles. Chess is a crucial element in The Westing Game, with Turtle’s neighbor Theo Theodorakis playing a game with an unknown partner that he begins in Samuel Westing’s parlor. Turtle learns to play chess from Sunset Towers’ doorman, Sandy McSouthers. Her neighbor, Judge J.J. Ford, learned to play from Westing himself. Turtle later teaches her niece. A skill for playing chess in turn helps these characters play the Westing Game. Meanwhile, video games are the way to the prize in Ready Player One. Not only is Halliday’s quest a video game in and of itself, but dozens of clues are hidden in the Nintendo and Atari games he played in his youth in the 1980s, and Wade’s talent at gaming is what mobilizes him ahead in Halliday’s Easter egg hunt. These two types of games make a pretty perfect metaphor for how the two books feel when we’re reading them: The Westing Game is elegant and deliberate, like chess, while Ready Player One ping-pongs all over the place with breathless speed, much like a video game.

Spielberg’s adaptation of Ready Player One is a blast, a fun, frenetic reminder of the giant kid-shaped heart our best loved filmmaker possesses inside his grown-up’s chest. It’s hitting screens a mere seven years after Cline’s book debuted – so what do we have to do, thirty years later, to get a real feature film adaptation of The Westing Game? Sure, in 1997, we got the profoundly okay TV movie Get a Clue!, but I’m talking about a big screen tribute by a talented director. Let’s give Raskin’s brilliant, beloved, long-neglected novel the Spielberg treatment – or, heck, the duVernay treatment. Let's just get it on the silver screen already. We're only three decades behind, after all.

What Works & What Doesn't: "Gremlins"

Aside from watching sports, I also like playing a number of casino games. None of them can be trusted, I'm sure, until you read reviews. There are a few things I do before I begin playing at a casino, such as checking out the reviews at https://casinosanalyzer.com/online-casinos/maximalwins.com. I have no fear of being taken advantage of.

For drawing and creating art pieces, you need an artistic or drawing laptop. As far as a drawing laptop is concerned, there is no better option than Surface Pros. The Surface Pro is one of the top-line choices for artists because it offers a responsive screen for on-the-go drawing; it is ideal for comic journalists and specialists and everyone who wants to draw their creativity.

I have found this blog very much informative.