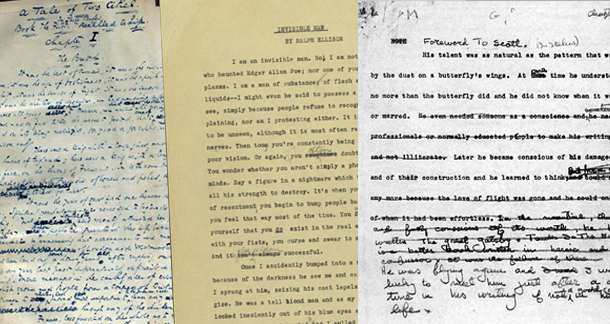 Photo: Original manuscript for Dickens' Tale of Two Cities, typewritten manuscript for Ellison' s The Invisible Man and the foreward to A Moveable Feast: The Restored Edition by Ernest Hemingway [Scribner]

Technology has done a lot for us, from improving the way we live to lengthening our lives to making communication across the world instantaneous. Every moment of our day is affected by developments from the last few hundred years. The way writers have approached their job has changed, too, from scratchings on clay tablets to pictograms on the walls of temples; text written on papyrus, vellum, paper in its many forms, and now on the screen. The question is: how does that affect what we say and how we say it in the 21st Century?

That seems an obvious question, you might say, but is it? Our predecessors wrote their novels, poems and treatise longhand, with scratch quill pens or leaky fountain pens, before the invention of the typewriter. It’s only been in the last decade or so that publishers would accept manuscript submissions on anything other than paper — and the continued existence of the slush pile suggests that even that doesn’t work if you’re a new writer.

But what does that mean for the process of writing?

Some would argue it makes it easier to get our thoughts down on “paper” and also increases the ease with which an author can get his or her work out into the world. The proliferation of sub-standard reading material is a result of that — and it is not good.

It’s very easy to vomit words into a text program and send the results off to the printer, whereas the act of writing a manuscript long hand and then typing it up is a much more time-consuming and perhaps thought-provoking process.

Others will say that the process of writing multiple drafts is essential to honing a work and cutting out the dross. But why is the delete key or spell check not a valid tool for that whittling? I’m sure many authors who started in the days of handwritten drafts and typewritten manuscripts still feel that way, although a goodly number have made the jump to computers and some kind of writing software.

I think that’s the crux of the matter: the ease with which we delete or expand, cut and paste, add or subtract might have resulted in the loss of thought and introspection that previous generations of writers put into their work. The act of putting pen to paper requires thought — hence all the writing and discussion of the fear of a blank page. Even writing in pencil is far more of a commitment to the work than simply tapping away at your keyboard. (No, the irony that this very piece is being written in Scrivener on a Mac is not lost on me.)

It’s very easy to vomit words into a text program and send the results off to the printer, whereas the act of writing a manuscript long hand and then typing it up is a much more time-consuming and perhaps thought-provoking process. I’ve spoken to a number of authors, whose work I value, and one thing a lot of them have said is that they often put a manuscript away before coming back to it; this means that when they look at it again, they can see the flaws and errors — and the fantastic bits — with new eyes when they do return.

"In the early days of word processing you'd often hear the complaint that novelists were writing too much – not shaping as they used to when they had to work on a typewriter," says the poet and author Blake Morrison. "I don't think it's true. When it's so easy to cut and paste, and to create multiple drafts rather than having to type them out afresh each time, there's really no excuse for sloppiness.”

Most of the authors we still revere—Dickens, Hemingway, Salinger, Vonnegut, to name a few—wrote their manuscripts on paper with a pen (including corrections and changes) before they did anything else. The process of taking those scribblings and then typing them up or typesetting them was a way to refine the process and give the works a coherence often missing in modern novels.

Entering words into a word processor or writing program can also make it easier for an author to put “pen to paper” and get the ideas and notions spilling around their heads out. Personally, there are times I can’t type fast enough to get everything I want to say put into the correct words and I’m sure I can’t write as fast as I type. Plus, my handwriting is atrocious.

Technology is also helping those who don’t have freedom of movement or the ability to write through speech to text or other input methods, thereby freeing them from the restraints that previous means of writing had bound them up in. It is an amazing world we live in.

A lot of modern authors spend a great deal of time on the interwebz, either checking facts, updating social media or simply using the vast network to connect with the people they’re trying to reach with their work. And while the internet can be a huge drain on time (cute cat videos, anyone?) it can also be a very powerful tool.

From typing on a rolling stream of white space to editing in a cloud, shifts in hardware have altered the way writers research, draft, refine and, ultimately, conceive of their work. The basic mechanism may stay the same, but new tools have led to new relations between authors and the words they use. With the internet, the barrier between the writer and the world has become as thin as skin.

Nowadays, you don’t have to go to Istanbul to view the Blue Mosque and soak up the atmosphere — you go there virtually and read others’ accounts of the experience from the comfort of your armchair. It might help your writing to be there in a physical sense, but it’s not essential.

'In Eat My Heart Out there's a section that takes place in a neo-burlesque club," says Zoe Pilger. "But I've never been to a neo-burlesque club in my life, so I researched it by watching a lot of burlesque routines on YouTube. Another time I wanted to fictionalise a particular set by a particular band at a festival I'd been to. Whereas before writers would have to use their memory and imagination to embellish, I just looked it up on YouTube and could watch the exact set in 2007. Technology provided me with a memory."

But does our writing lose something if we don’t have to struggle to find the information we need to complete our manuscript? I’d say no: that struggle isn’t essential to good writing — but making sure you’ve got your facts right can affect the outcome and believability of your story. Frankly, if you’ve ever struggled to find information in a card catalogue or recalcitrant library system, you probably agree with me.

The way in which the manuscript is disseminated

Obviously one of the most important ways technology had changed our lives is how we distribute, access and read things these days. It has also led to a glut of writing where everyone who has a book inside them can now put their words out for everyone to read, making it more difficult to separate the wheat from the chaff and cull those gems worth the time spent reading them.

It reminds me of the early days of desktop publishing: anyone with a DTP program could call themselves a designer (and they did). This led to a proliferation of rubbish design, generated and put out into the world with little thought about the importance of a typeface or the difficulties of reading white text on a red background.

It’s the same with writing and publishing. We’re seeing the results of easy access to technology thanks to the likes of Amazon, Lulu and others, but I can hardly complain when I use a lot of tools like that myself. Moaning about the “good ole days” just makes me an old git and doesn’t help the conversation.

We should all be writing out our manuscripts

Now hold on, I’m not saying we all should be writing our books long-hand, by any means, but maybe we should be putting more time and thought into the work itself before we commit words to the virtual paper. I know my own work benefits from some time and space, particularly when editing and rewriting what I’ve put into my writing program. It would certainly make a lot of books out there a bit shorter.

You can see the digitized version of Charles Dickens' manuscript for Tale of Two Cities on the Victoria and Albert website.

Nevermind, I was just being negative.:/

Technology is not a bad thing like most of you think. It helps us in a lot of ways that we don't even know about. Let's take https://spinbackup.com/, they created a service that can automatically do a backup of your data and send in to the cloud. They also have a ransomware protection, so your data will not get corrupted in any way. So if you are a writer and work in google docs, you will appreciate it because it will not allow your text to be lost.

Thank you for these guidelines, I was having difficulties in making a suitable budget for my home and business requirements. You can get outbound lead generation for the that who wants to make a lead generation. What a nice blog post this was, there were lots of new things to learn.