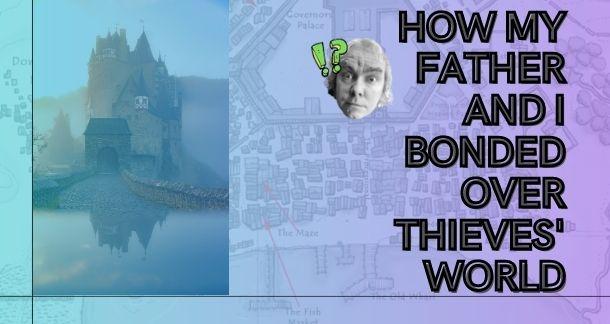 Thieves’ World was a shared-world, sword-and-sorcery anthology series that debuted in 1979. The stories from different authors took place in the gritty city of Sanctuary out on the coastal edge of a thriving empire. Twelve anthologies came out between ’79 and ’89, one a year every year except ’86, which saw two releases. About ten authors at a time per book played in this universe, including some recognized talent, who joined in to create stories and characters. Over the course of a decade's worth of stories, regimes rose and fell. Opposing pantheons of gods did battle, and this far-flung city endured the brunt of it to the joy of readers. There was a brief revival of the series in the early 2000s that produced a couple more anthologies.

I came to the series late in the first run. They had already released the earlier books with new covers to keep interest alive. My father started picking them up and passed them on to me to read as well. We had favorite characters and marveled over particularly intense storylines. I can’t believe they killed him off! This one has a couple Shadowspawn stories!

Conflict On and Off the Page 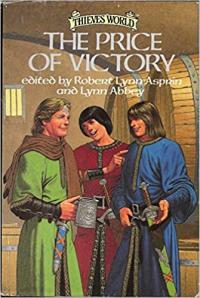 There was behind the scenes drama in the series with the authors and editors. Marriages and divorces took place. Authors used each other’s characters and did bad things to them to work out personal grudges. The famous quote about the series was “you write your first Thieves’ World story for pay; you write your second for revenge.” On the page, this played out with some convoluted storylines that involved characters dying in one book and then being resurrected in the introduction of the next. Some choices felt odd to me as a reader, but I was engrossed in the stories, not the real-life drama.

My father and I had a complicated relationship. He had a heavy hand when it came to discipline, and sometimes that hand was a closed fist. I guess that’s a pretty straight-forward relationship. This got worse and more pronounced as I grew from childhood into my teenage years.

There were very few points of common interest, and this often added to our conflicts. Reading was one area where we converged. My father and I had overlapping tastes in sci-fi and fantasy. Later, we had a small overlap in horror.

When I was a kid, my father read to me. I remember sitting next to him as he read me Treasure Island for a number of nights in a row. As I leaned against him, I could hear and feel his voice rumbling in his chest. I still associate that low rumble with many of the classics my father read to me back then.

Growing up in the 80s and early 90s, Friday night entertainment for my money-strapped family often included going to the mall and just walking around. Sometimes it was the whole family. Sometimes it was just my dad with my brother and I. My brother was sick with heart defects, so sometimes it was just my dad and I. When it was just me and him, mall Chinese food was another shared interest. We looked at a lot of stuff, but seldom bought anything. The exception was books. When we walked into a bookstore, once I was old enough to read novels on my own, I knew was going to leave with a paperback of my choice. If the both of us had finished the last Thieves’ World anthology, I might be leaving with two books.

I was not as familiar with shared-world literature before Thieves’ World, so the concept of all these different authors playing together in the same sandbox was a novelty to me. I’ve read other such work since and even wrote in a few shared worlds as an author myself, but this was my first. I still love the concept of shared worlds today as a reader and a writer.

The ironically named city of Sanctuary was a dangerous place full of adventure. The stories fascinated me and transported me. I would flip back and forth from the stories to the rough maps of the city and the broader empire to see where we were. Once I was finished, I knew I’d get to discuss the ins and outs of the adventures with my father, who was as captivated by the tales as I was. Reading was always such a solitary act, and my life in my parents’ house was an isolating existence, but this was a rare exception.

I feared my father. He’s been dead for over twenty years and occasionally, when something goes wrong, I get a second or two of real fear that my father is going to be upset. It’s only an instant and then it is gone for years at a time, but there are moments of stress when I have to remind myself I’m out of the reach of his heavy hand now.

The city of Sanctuary with its cast of characters and interwoven storylines was a dangerous place. There was danger in my troubled relationship with my father, but all that was set aside with the escape into another block of ten stories.

Each book tended to begin with a gnarled storyteller observing things within the Vulgar Unicorn tavern. Sometimes stories visited the Vulgar Unicorn for brief moments or for plans to be made before venturing out into the real danger. There were brawls and harsh words spoken within the Unicorn, but you knew all the real trouble was always going to be outside.

As my father and I sat down to talk about the stories we read, we were pulling up chairs in the Vulgar Unicorn. Danger waited outside, but it was all about the stories and adventures at this table. We would have to go out and leave Sanctuary behind eventually. All our old problems would be there when we were done with Thieves’ World, but for a time, we could share a table and some enjoyable adventures. 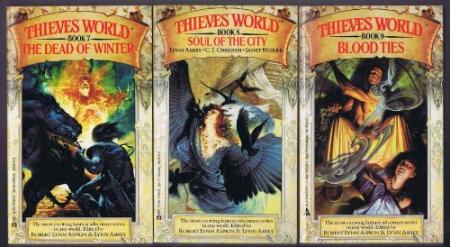 Liking the same stories doesn’t solve much and it certainly doesn’t forgive the sins of my father. It does mean something, though. My fondest memories of my father tend to connect to books. I remember him reading to me. I remember him buying me books. I remember the conversations and speculations we shared around stories we both read and enjoyed. At a time when much of our common ground was crumbling away, Thieves’ World was that last place we could meet in the middle for a little while longer.

It was my world, too, apart from my father. He didn’t own it and he couldn’t take away the escape that reading stories like these gave me. Reading was a habit he respected and wouldn’t attack me for doing.

Thieves’ World opened my imagination. It added some darkness to fantasy adventure that I didn’t always see, but started to seek out once I knew it existed. When I needed darker adventures, I explored horror and found my voice there. This imagination would lead me to write my own stories in multiple genres and allow me to make a career out of storytelling. I traveled with the characters these authors created as they returned book after book. I bought into the troubled city, the rise and fall of empires, the petty disagreements of the gods, the reveals of beloved characters’ backstories, and the new additions as a fresh author stepped up to try their hand at adding to the gritty mythos.

I find that stories take on the subtext of the things going on in my life. It is rare for me to experience a story in utter isolation. This is true when I read stories and when I write them. It is especially true when a story is very good. If it transports me, it imprints with who I am and what I am going through. Revisiting a story returns me to those times to a degree.

There were a lot of negative things going in my life while I was reading Thieves’ World, but revisiting those stories takes me to a pocket universe. It is a dangerous sanctuary in the midst of turmoil. Trouble could hide at the end of any street, but that doesn’t ruin the adventure for me. And if I ever want to remember my father in a better light, the Vulgar Unicorn is as good a place as any.

Get Thieves' World: Volume One at Amazon