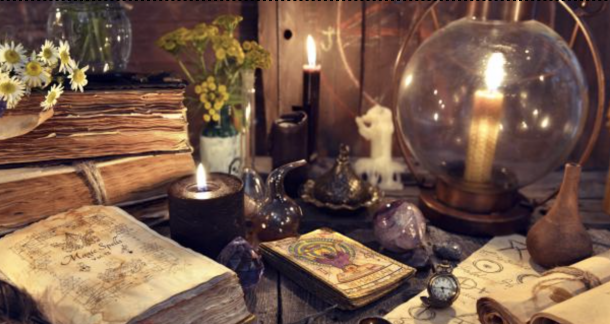 I don’t always write when I witch, but I always witch when I write. This was not always the case. I began writing poetry when I was a teenager, as most people who write poetry do. I did not take it particularly seriously. In my 20’s I began to explore various mind altering techniques, ranging from meditation, yoga, ecstatic dancing to tarot card reading. Through the process of putting my mind and body through the paces of a psychic workout, I was able to become more grounded in my life, and to become more aware of myself and my feelings as they occurred. I found myself more frequently able to think and create from a deeper, clearer, place.

After years of experiencing the benefit of these practices to my everyday well-being, I decided to start directing them towards my short story writing. I found myself extremely overwhelmed with the new task of structured storytelling versus the free flow of poetry or the induced hallucinatory trances of flash fiction. The first time I consciously used magical techniques to help me plot was when I wrote my first horror story, "Green Lotus".

I hated the characters in my story. They were supposed to be unlikable, so that was right on track. But this was the first time in my life I found myself writing without any pleasure whatsoever, outside of high school essays. I wanted to just get to the end, which had full on Creepshow level imagery. I wanted to get to the crazy stuff I had been picturing since I conceived of the story. But first I had to make it through all the dialogue and come up with something to lead my characters to their big tragic finale.

Through the process of putting my mind and body through the paces of a psychic workout...I found myself more frequently able to think and create from a deeper, clearer, place.

I obsessed and worried with my deadline looming closer and closer. I decided I needed to dress the part to feel like the badass horror writer I was supposed to be but did not remotely feel like. Remembering my fondness for playing dress-up as a child, I put on a red velvet dress, red heels, red lipstick, and sat down to write in earnest. I immediately felt the difference, I felt like I was creating a spell. I was more focused. I felt like a horror writer so I acted like one. This act in itself sent a powerful message to my brain that I was choosing to write this story. This was not about a deadline, this was about claiming my territory. This was about creating magic.

As I powered through the depressing dialogue of a couple clearly on the rocks, I had a flash of inspiration to create a chakra meditation, to serve the double purpose of purging myself of my own blockage and to serve as a really cool metaphor about how these characters needed a full on psychic exorcism.

I followed the same process of activating a chakra meditation with imagery when I wrote the titular story of my short story collection, "Cartoons in the Suicide Forest". This time it also signified a sort of psychic poisoning and purging. The purpose of the meditation was to unblock my voice. The meditation ended at the throat chakra, with the character cutting their own throat and blue paint streaming out instead of blood. After completing the scene of the unblocking, a trauma I had buried came out with such vividness it chilled me. I choked back the sobs as I wrote the scene.

In my 20s I had an abortion. The character in my story saw a vision of her dead baby, for she’d also had an abortion. That story deals with some very intense trauma that lives in me. I made the ritual to bring my pain to life. I made the choice to purge it from myself so I could move on and live as my monsters took on a new life on the page.

I realized after writing these stories, and others in which I used dreams as story inspiration, or used tarot cards to gain plotting or character insights, that this process would be so fun to share with others. A few years later I taught my first Lit Witch class. I had several exercises, one of which was for the students to write a piece of flash fiction that was a journey through the chakras just as I had done, with the goal of plotting and cleansing in one creatively inspiring act. They had to transition through the colors, starting at the red root chakra, through the energy body, onto orange sacral chakra, yellow solar plexus, green heart chakra, blue throat chakra, purple third eye in the center of the forehead, ending at the white light crown chakra at the top of the head.

Another assignment involved a meditation on their shadow animal or self in order to create the ultimate fictional monster. The purpose was to delve into the darkness within to unchain the trapped or hurt or buried parts of themselves. I wanted them to be able to write realistic monsters, not one dimensional Disney villains.

These exercises to unlock the unconscious mind are similar to ones practiced by the Surrealist poets and artists in 1930s Paris who were inspired by Sigmund Freud’s discoveries about the subconscious and the Id. They used automatic writing and induced trances in order to reach these deeper levels of awareness and unlock never before seen art inspired by dreams and subconscious impulses.

What I found fascinating, even more than Freud’s groundbreaking analysis of the dark side of the mind, was Carl Jung’s further delving into the mystical dimension of the self. Whereas Freud saw the self as divided between its parts of Id, Ego and Superego, Jung saw the self as being in the process of integrating its parts or becoming itself. A self — connected to a larger collective unconscious.

Freud’s theory of the Id as the repressed reptilian brain tendencies in humans, combined with Jung’s theory of the Shadow as something that if neglected would darken and grow more dangerous, along with Shamanic practices of Skinwalking (being imbued by the spirit of an animal and drawing wisdom and power from it by either wearing its skin or ingesting hallucinogens or both) which has been practiced by Viking Berserkers, in Native American traditions, and by tribes all around the world, led me to my own shadow work practice.

The power of ritual can be harnessed at any time, even when you are creatively blocked and have a gut churning deadline. Think about what relaxes you. What makes your dramatic side wake up. Some people get a lot out of costumes. Clothing can be transformative. It can take you out of your mundane frame of mind into a heightened state. For some people candles serve that ceremonial quality. I myself can stare at a flame for hours. Candles, incense, tarot cards, crystals, herbs, meditation, breathing, ecstatic dance, drumming, music—all are tools to alter the mind from its default uninspired state of perpetual worry and looping thoughts.

There is a sense of play to all this. The point is to loosen yourself up. Do something you would not normally do. Do not think about what people might think. Go to the woods and howl under the full moon. Words have power when assembled with intention. You never know what word witchery is waiting just on the tip of your tongue or your pen.

Thanks for these tips, they can be really helpful for somebody. In my case, perhaps nothing will help, as I was never good at writing, and never liked it. When I need to do some writing assignment, I usually look for a service that can do it for me. I found a good site BestWritersOnline, where I read a lot of reviews on different writing services. You can see the ratings of each one, and pick the best for your needs.

Very interesting article, I would like to learn some tricks. Any help is very appreciated for me now. I prepare all the necessary documents and a letter of recommendation for an internship abroad, using this service https://www.personalstatementwritingservices.net/lor-writing-service/ This is a very responsible and important step in my life. My future and career depend on it. Therefore, I would like to use all the opportunities to the maximum.