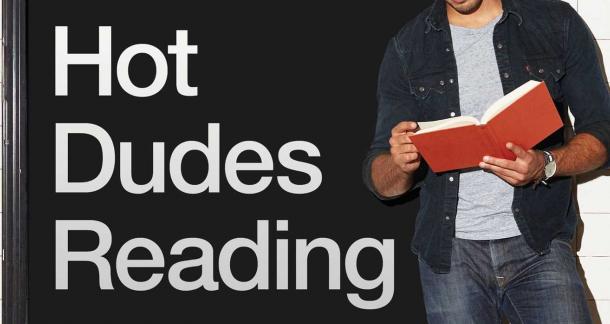 The premise is pretty simple. A group of creeps take pictures of attractive men who are reading in public and then add fetishizing captions.

Sorry, am I revealing my take on this too early?

Here’s the thing about HDR: Some folks have problems with the sexism of it, and we’ll talk a little about that, but I think the idea is a failure in a much worse, much bigger way.

Let’s Get This Out Of The Way

All of those factors might make HDR less sexist in a two-wrongs-make-a-right kind of way, but they don’t make the whole thing un-sexist.

And there are three basic points to be made here.

Point the first: The captions take this into gross territory. There’s part of me that’s like, “This is harmless fun, why make a fuss about it?” But the captions are where things get a little fucked-up.

With his hearing and sight already occupied, I have no problem leveraging taste and touch.

Ran into this caffeinated cutie on my way to a friend’s #MemorialDay BBQ. I was supposed to pick up some burgers on the way, but all of a sudden, I’m in the mood for a foot-long instead. He looks pretty content but I guarantee my weenie roast will be a lot more eventful than sitting there all afternoon. #INeedAHotDogRealBad #hotdudesreading

Everyone else might be at #Coachella but I'm just on this train trying to figure out where this burley brunette is headed. Lucky for him, he doesn’t have to go all the way to the desert for a show stopping performance. And I promise mine will be much more intimate. #LoveOnTop #LoveOnBottom #LoveInTheMiddle #LiterallyAnywhereYouWantIt

I’d even cram myself into a middle seat so I could teach him all about my own special love languages: Words of Insertion, Acts of Sexuality, Receiving Tongues, Spooning Time, and Really Really Physical Touch. But the language I like speaking the most is #bodylanguage #hotdudesreading

This shit is creepy. If I found a notebook with this kind of stuff scrawled in it, I would be concerned. This kind of text should be slathered on a wall in blood and lead investigators to a murderer who presents them with a head in a box. 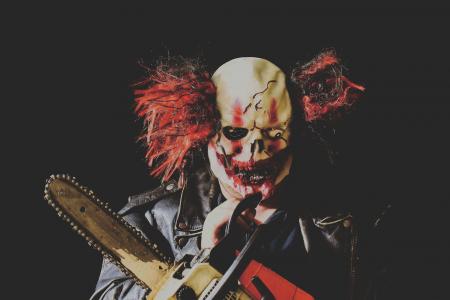 But the important tie-in here is point the second, which is that consent is non-existent in the world of Hot Dudes Reading. That’s right, these dudes, for the most part, have no idea they are being photographed. At one point, HDR tried to reverse-engineer consent by posting on their Facebook that if someone saw himself on there and wanted to be taken down, all they had to do was contact HDR. Which is, to use the name and spelling of a hip-hop artist, Ludacris. How would someone know they were on HDR if they didn’t follow already? And how is offering to take something down equivalent to not doing the thing in the first place? We live in an age where consent is everything, but HDR can’t be bothered?

Point the third is that this account commoditizes objectification. They sell a book, they sell calendars, they sell t-shirts. And do the models get paid? Do they even know they're in the book? The calendar? Do they get any kickback from their images and sexualization being used to sell t-shirts?

There’s a link for “business inquiries” in HDR's Instagram bio, but no link to request your picture be removed. There are SOME posed shots to be found, and they’re posed for the purpose of selling Pizza Hut.

Hot Dudes Reading is making a buck off of objectification without consent. Overall, not super cool.

More to the Point

You can read everywhere about the problematic nature of this, you can read arguments for and against it. The objectification isn’t the thing I really want to talk about, though. It’s that Hot Dudes Reading has failed. They've failed to make reading sexy.

Where My Books At?

Scroll through HDR’s feed, and you’ll see plenty of eye candy. But just how book-centric is this whole endeavor?

I did some of my own very un-scientific research using the most recent 100 images (in August 2018). In 13 out of the most recent 100 images, I could discern the book’s title (okay, it was really 15, but two of those posts were sponsored for The Alienist, so I’m not counting them). 13% of the time, someone could reasonably look at these pics and figure out what the hot dude was reading.

In those same 100 photos, 8 of the captions mention book titles, and many of those are in a sideways fashion where a casual reader wouldn’t be able to look up the book and read it themselves.

What I’m getting at here, for being such a book-based thing, HDR doesn’t really seem to give a hot damn about what these hot dudes are reading. For all we know, this account might as well be called Hot Dudes Reading Mein Kampf.

But let’s not go that way. Let’s go the other way.

In this image, the hot dude is reading Hyperion by Dan Simmons. This is a Hugo winner from 1989 that has a multiple timeline sci-fi story presented in a Canterbury Tales structure. It’s some nerd shit. It's good shit, but it's definitely nerd shit.

Would it be such a bad thing to show us the title, or to list it, so that we could see an attractive guy with genuine interest in some uber-nerd stuff? Doesn’t the presence of that particular book say something about that guy, something that we might think of as being in contrast to his appearance? Is this title something that should have to be called out by a commenter?

The books don’t matter over at HDR. Not one bit. Okay, maybe a bit. Being generous, they matter 10%. That’s not good enough.

When you get down to it, the thing that supposedly makes this idea unique is that the guys are reading. But the reading is more present in the name of the business venture than it is in any of the images.

Books are the hook for HDR. They’re the thing that grabs your attention and differentiates this from Hot Dudes...Just Generally Being Hot Dudes.

Books could serve a real purpose here, but once they hook you in, the books are conspicuously absent.

You with your Hot Dudes Reading and I with my brown, stained catalog of models in beige bras, we’re the same.

That’s right, I used a big-ass word. And hyphenated. And there’s a silent “P.” I’m on a roll here.

Looking at man meat is fine. It’s a wholesome activity. Can we just stop pretending that we’re so much better? That looking at HDR is any different from looking at tasteful nudes, distasteful nudes, feet pictures, or whatever floats your boat? If you’re looking at this for a form of sexual gratification, you’re doing the exact same thing as someone looking at a Victoria’s Secret catalog he fished out of the garbage when I was 14 and lived at home and I had to debate whether to tear off the cover, which was wet and stained with coffee grinds, or to try and dry it out and hope for the best. Don't turn your nose up at me. You with your Hot Dudes Reading and I with my brown, stained catalog of models in beige bras, we’re the same.

The account refuses to post pictures of dudes reading on Kindles or other eReaders. Jesus, format-bias much?

Don’t get me wrong, I read both ways, and I do prefer an honest-to-goodness book. I just think it’s sort of weird that amidst pictures of guys, taken while they’re unaware, we’re suddenly taking a moral stance. It’s like some guy says, “I catcall people all the time, but I only listen to vinyl because anything else is for fools.” And then I high-five that dude and later think, “Waitaminute. What was that first part again?”

Or maybe it’s not a moral stance, maybe it’s an aesthetic thing. Which would make a lot more sense if books had anything to do with the aesthetics of this whole shebang. If they represented something of value or if you could see a title more than one out of every ten times.

Do Hot People Have To Own EVERYTHING!?

I’m so tired of sexiness being the benchmark for value. It’s like, if a hot person does something, suddenly it’s a valid use of your time. When did we decide that? How?

Some of us, the trolls, the C.H.U.D.S., the scumbags, the lords of the sewers, the people who eat chocolate donuts on the toilet—I could go on, but let’s just say SOME OF US don’t have the hot option. We need something. Leave us something, something we can achieve that lets us compete with chiseled faces and bodies. You’ve already got so much. Can’t you leave us reading? Can’t you leave us this one thing?

Books Are Better Than This

The biggest thing, for me, is the penises.

Okay, just kidding. Just trying to get into the Hot Dudes Reading spirit.

The biggest thing, for me, is that books are better than this.

Books mean a lot to a lot of people, and I think it’s pretty lame, limp even, that you’re using books as a prop to sell sex. Newsflash: Sex sells itself! You don’t need to slap something on top of sex to sell sex.

Watching this pairing of books and hot dudes, it’s like when your friend brings a new partner out to dinner, and everyone is thinking, “Oh, friend. You can do much better.”

Books, don’t be with Hot Dudes Reading because it’s convenient. You deserve to be with someone who really cares about you. You're better than an Instagram account that OCCASIONALLY lists your titles and authors. You’re better than serving as a tertiary prop to sell pizza (pizza, like sex, also sells itself, by the way).

You deserve so much more than what Hot Dudes Reading is giving you. 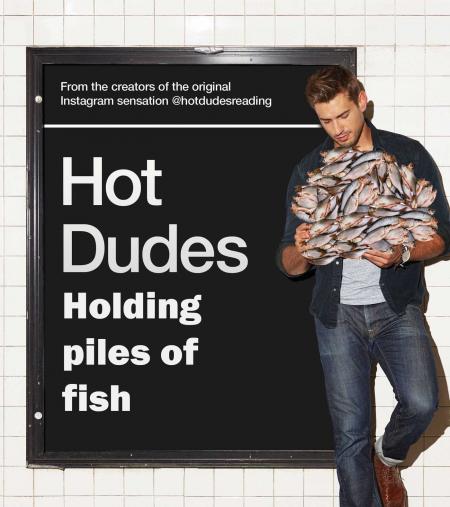 The Dick Jokes Ain’t That Good

Most of them are about a 4, at best. And when it comes to dicks, 4 is below average.

Why is this so difficult? You’ve got plenty of material to work with. Lots to roll around in your mind. Plenty to chew on. There’s a rich, thick vein to be mined here.

What HDR does are not dick jokes. They’re dick puns. And puns will always be the limp phalluses of the joke world. They’re fine, they can be molded into something passable, and they happen to all of us here and there. But given the option, most would take a rock solid joke over a pun any day of the week.

10 Reasons Why Bookstagrammers are Awesome