Help, There Are Feelings In My Sex: The Origins of Girl Like A Bomb 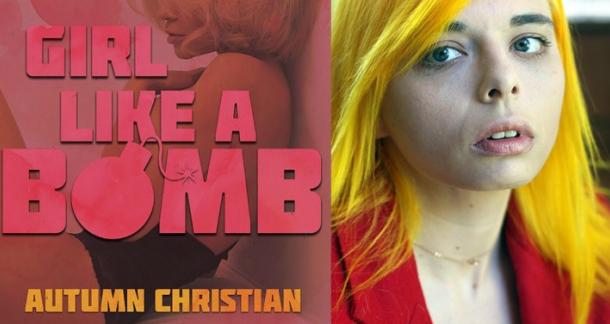 Sex always seems to bring out the worst in people.

The protagonist in Girl Like a Bomb, Beverly Sykes, loses her virginity at the age of fifteen. I was much older. At the age of 21, I was an awkward, ugly little thing with mousy brown hair who wore almost nothing but her boyfriend's t-shirts over stretched out bras and skinny jeans over scuffed plaid sneakers. I avoided eye-contact and kept my head down in books and did my best disappearing act.

If you think because I had a boyfriend I would have lost my virginity, you'd be wrong. We met in a DeviantART chatroom during NaNoWrimo. I found out he lived an hour away from my dorm room, so I jokingly messaged him, "Come take my virginity. I'm bored." He politely declined.

A year later we had our first date in an iHop, where I was so nervous and scared to speak I wrote him notes and passed them across the table instead.

Later, we ran away to Austin, Texas together. I dropped out of college, and was making most of my money primarily on the Internet writing articles for Demand Media for $15 each for demanding editors who acted more like it was $15 a word. My then-boyfriend and I didn't have sex. Not for religious reasons, we were both newly minted atheists. He was too afraid of pregnancy, even with birth control and condoms, and insisted that I needed to promise I'd feel absolutely no emotion if I was to get an abortion. I told him that was a ridiculous request, so my virginity remained intact.

Even when the sex was good, it was rare for me to find that the person underneath was someone worth knowing.

I went from the age of ripeness, to fermentation.

I would lose that virginity about a year later, in a room behind a hallway lined with glued-up broken pieces of mirror with drunk peoples' blood scraped on their edges. It was a boy with sleepless eyes who told me my skin tasted like almonds, who sent me the text message once, Like the jaguar eats the deer, one day I will devour you.  My boyfriend was watching Eraserhead in the next room. Being a communist meant that everything was shared property, including me. I came into the living room sat down beside him a few minutes after the deed was done, flushed, my skin vibrating. I leaned over and whispered to him that there was semen in my hair.

He laughed like it was the funniest joke I ever told. Then kept watching television.

A couple weeks later, my then-boyfriend ate a starburst in my roommate's room that turned out to be laced with acid, and he left shortly thereafter. I was left alone, in this house full of punks and burners, and alone I realized I was someone who could be desirable. I cut my hair, and began to wear blouses and bras that fit, and saw how much could change by swapping out my sneakers for $6 shiny boots I bought at Goodwill and baring my shoulders. My new friends and I would go out to the bars and up and down sixth street and suddenly people were staring at me. Me. The invisible girl. I had become flesh.

Every would-be philosopher who wants to get a girl into bed will say that sex is nothing but animal emotions, whipped up into pseudo-spiritual importance by the mere excitation of chemicals. Sex could mean nothing but pleasure, two bodies rubbing together, igniting a spark for a brief moment in a universe made mostly of empty space. And for a while I believed that. "It's just sex." Like my soul was a package I could neatly tuck down into my ribs so I could fuck unhindered.

But it didn't really work out like that. People were people all the way down, and they could not hide themselves, especially not when stripped of clothes and shut behind a door alone. The soul was not a neat package that could be tucked away. It was buried in the substrate of the self. During sex, pretentious people became even more pretentious. Selfish people became very selfish, Lazy people were lazier. Desperate tongue-punched boys who felt like there was a piece of jerky where their heart should be tried to drape their emptiness into me. I came to dread the moment when I would kiss someone and the mask they wore would slip, revealing whatever flavor of monster they were.

Even when the sex was good, it was rare for me to find that the person underneath was someone worth knowing.

Still, inevitably, feelings would develop. They were not just sticky burrs or inconvenient fluff that could be brushed off the bedspread the next morning. They were built into the act itself. I’d berate myself for not being a cool girl, a disaffected girl, and in turn would perform devastating acts of coldness just to prove to myself that I could. To prove I was not one of those simpering angels who dissolved into puddles of gooey, humanistic, awful feelings. I was above those organic feelings. I was an artist.

See? Sex really does bring out the worst in people.

But what if it didn't have to be that way?

Years later, my virginity long gone, I wondered: What if sex could actualize your true self, the self you were always meant to be? What if stripping bare didn't make people ugly, but made them beautiful instead? Not just because you found someone you loved, or someone who was good in bed, but because the act itself made them the best version of themselves?

There came my idea for Girl Like a Bomb. It is a female coming-of-age story that's like a cross between an X-men origin story and Lars Von Trier's Nymphomaniac. It is a novel about sex, but it's not erotica. It's about the road toward becoming human, and the best version of yourself, via the medium of sex. It's a love story to movies like Kids and poets like Bukowski. It's a tribute to every woman who wanted to just live her life, fuck who she wants, and not have to pay the price of shame. It's as close as I could get to realness, while maintaining the magic of reality.

It was originally just a longish short story, but Christoph Paul from CLASH books got a hold of it, and saw novel potential. I signed a contract with CLASH, and he helped me flesh out the plot, and bring Beverly Sykes's journey to a satisfying arc. It turned from a quirky character piece, into a labyrinthine, dark, sexual journey of one woman's self-actualization.

Maybe sex is just sex. But it's also everything. Every pure emotion filtered down into its rawest form, soul pulsing just underneath the surface. And when that's realized, it can stop becoming just a sideshow of the worst of humanity. It becomes a routed maze of the depth and breadth of all human emotions. A book of soul and skin.