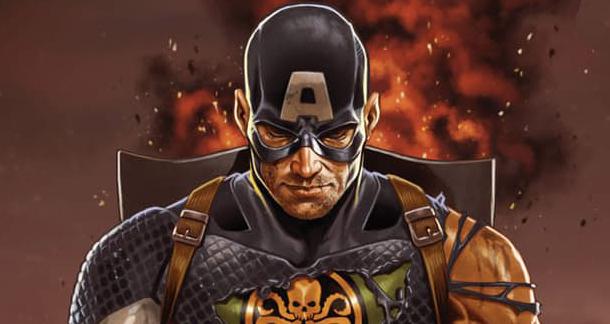 As Harvey Dent said in The Dark Knight: “You either die a hero, or you live long enough to see yourself become the villain.” He was talking about Batman, but the statement could easily apply to all superheroes. Being fictitious, they never have to die, and even when they do, it never sticks. Seventy years is a long time to tell stories about the same character, and writers have to shake it up every now and then to keep titles moving. Every superhero I can remember has had a death and resurrection story when sales were dipping, but another surefire way to reinvigorate a flagging readership is a heel turn. You have the hero break bad. Suddenly this safe, wholesome and predictable character you’ve followed for years does something unspeakably evil and you have to keep reading to find out three things: why he did it, what he will do next, and can he be stopped?

Currently, these questions are being asked about Captain America’s sudden fascist turn in the pages of Secret Empire. It was definitely surprising to watch Steve Rogers declare loyalty to Hydra and betray all of his friends in order to seize control of the world. Now he extols the virtues of strength and order while he executes dissidents and carpet bombs rebellious cities. Not the kind of thing anyone ever expected from the Sentinel of Liberty. So far the series seems to have upset many fans and drawn ire over its tone-deaf marketing in the absence of a compelling story. While Nazi Steve is certainly unsettling to look at, he is not flamboyantly evil enough to replace a genuine cackling villain like Baron Zemo or the Red Skull. Furthermore, since his turn is caused by a retcon rather than character development, his fall from grace feels more like a historical footnote than a Shakespearean tragedy. DC Comics intends to try something similar in The New Order with Nightwing, ex-Robin and perpetual nice guy Dick Grayson, by having him lead a genocidal crusade against all superpowered people. Although fans were also unhappy with this announcement, the fury seems to have been dampened by the fact that The New Order takes place in an alternate universe rather than the main continuity like Secret Empire, which keeps insisting that this is the REAL CAPTAIN AMERICA. Perhaps both of these titles will impress us in the issues yet to come, but at present there are much better written and more entertaining examples to learn from. 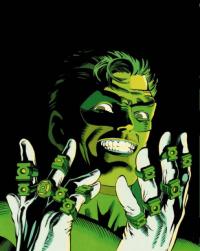 The first heel turn I remember reading was Green Lantern’s. Superman was dead, and while a bunch of pretenders were fighting over the title, an alien warlord went and wiped Hal Jordan’s hometown off the map. When he tried to use his ring to rebuild the city, his bosses basically chewed him out for using office supplies on a personal project. This pushed Hal from understandably upset to fucking furious, so he massacred the Green Lantern Corps. He took control of the Central Power Battery in an attempt to rewrite history, until literally every hero in the DC Universe teamed up to thwart him. It was a long, brutal battle in which victory came at a steep cost that left the survivors wondering if they really won. Hal Jordan’s heel turn instantly elevated the stakes, the action, and the drama to new heights. Emerald Twilight was the most exhilarating comic I had ever read at the time, and it dominated the playground discussion even more than the death of Superman. On some level, we knew that death was the logical conclusion to a superhero’s story—you can only jump in front of so many dangers before one eventually takes you out. But the idea that a fallen superhero could become a villain was utterly alien to us. Even more than the death of a beloved character, this development meant that anything was possible. Heroes could not only be defeated, but broken. For the first time, we didn’t know what to expect.

Why do these stories appeal to us so much? Sure, part of is just the excitement of seeing something new, and finally getting answers to all of those “who would win in a fight?” debates. But perhaps the other reason we like to watch heroes fall is because it humanizes them. When a superhero proves that he or she is not the flawless paragon they appeared to be, we go from simply admiring them to identifying with them. We can see ourselves in this hero, for good or ill, which makes it easy to get invested. Which sounds more interesting? A tale of how Iron Man uses his genius technology to defeat another cosplaying technocrat, or a story about how Tony Stark’s vision for a safer world led to him nearly destroying it? One of those stories you’ve read so much you could write the ending yourself, while the other raises all sorts of interesting questions, inviting you to plumb the character’s depths in search of answers.

During the Civil War storyline, Stark advocated for the Superhuman Registration Act because he believed it would hold powerful people accountable for the consequences of their actions. When he took command of SHIELD, his goal was to reduce superhuman conflict in populated areas and lock up supervillains more effectively so the world could be a little safer for the normal people. And yet, every move Iron Man made towards his noble goal took him in the exact opposite direction. Superheroes were fighting each other over whether or not the law was just and while SHIELD was busy trying to referee, the actual bad guys ran amok. In the name of law and order, Stark created tons of anti-superhero weapons, tore apart families, cloned a Thor that murdered one of his comrades, recruited child combatants, nearly started a war with Wakanda, and built a secret prison in another dimension where offenders were kept indefinitely without trial. The cherry on top was that all of the technological infrastructure Stark built to improve SHIELD was compromised and became the platform for an alien invasion of Earth. Iron Man may not have become a straight-up supervillain, but he sure did act like one. Imagine how much worse it could’ve been if he was actually trying to be evil. 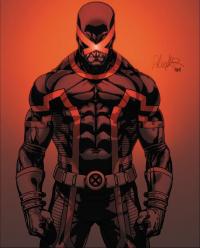 What enjoyment is there in watching our greatest heroes sink to their darkest depths? As in life, it turns out that the journey is often more interesting than the destination. Sadly, this is the part most often fumbled when comics attempt a heel turn. Although it is shocking to watch Captain America commit war crimes, we don’t learn anything about the Captain or why he is doing this. Instead of taking the character through any kind of meaningful change, they simply rewrote his entire personal history so they could make him a bad guy in time for the big summer brawl. Steve wasn’t broken or betrayed—the writers simply declared him evil. Since we are denied the road that led Steve Rogers to perform such deplorable acts, Secret Empire never manages to be as mind-blowing as it would like to think it is. No one just wakes up one day and decides to be evil, so there is not much to explore with heroes who undergo this instant change. Marvel made the same mistake with Shadowland, when Daredevil finally killed his nemesis Bullseye. Instead of struggling with the slow erosion of his morals, Murdock almost immediately goes full villain and takes over the Hand, a clan of evil ninjas, and starts ruling Hell’s Kitchen like a mad feudal lord. Of course by the end we discover Daredevil had been corrupted by the demon that gives the Hand its power, but since his turn made no sense to begin with, this was hardly a stunning revelation.

It’s ironic to see Marvel mishandling Cap’s heel turn so badly since they also have one of the best in Scott Summers, aka Cyclops. Ever since the mutant race was made nearly extinct in 2005’s House of M, the leader of the X-Men has been on a slow descent into darkness that has been fascinating to watch. Charles Xavier’s star pupil has shortened his dream of mutants living together with humans to just “mutants living.” Faced with the imminent failure of his mission, Cyclops was forced to become a ruthlessly pragmatic commander rather than the idealistic leader Professor X had raised him to be. With so few mutants left, their enemies have become emboldened and attack them relentlessly. Cyclops has been making increasingly questionable decisions as their constant endangerment continues, but always in the name of defending his people. That is what makes him so dangerous—Cyclops is a charismatic leader, capable combatant, and brilliant tactician utterly convinced his cause is righteous. Young, angry mutants all over the world are responding to his call for revolution and humans fear he has already declared war on them. This heel turn actually works better because it isn’t a surprise. If you’ve been reading about  Cyclops over the last decade, you can understand where this change has come from. You might even find yourself reluctantly agreeing with him—when the entire world wants to kill you simply for being different, do you turn the other cheek and beg mercy, or do you punch it in the face? And Cyclops’ journey is far from over. He is neither totally lost to the dark side nor fully redeemed, just like us real people.

Our struggle with our own dark side rarely has a climactic conclusion. We are all capable of doing wonderful and terrible things, and over a lifetime it is likely you will do some of both. That’s why we like to watch heroes fall—it makes them more like us. But we also love a good comeback story, because it gives us hope that we can do the same. After all, it’s not like you destroyed the world.

What are some of your favorite heel turns? Sound off in the comments.

Community Manager
helpfulsnowman from Colorado is reading But What If We're Wrong? by Chuck Klosterman June 13, 2017 - 8:32am

Superior Spider-Man? I don't know if that counts. Peter Parker's body was inhabited by Doctor Octopus, but to everyone in the Marvel U, it looked like Spider-Man had taken a turn.