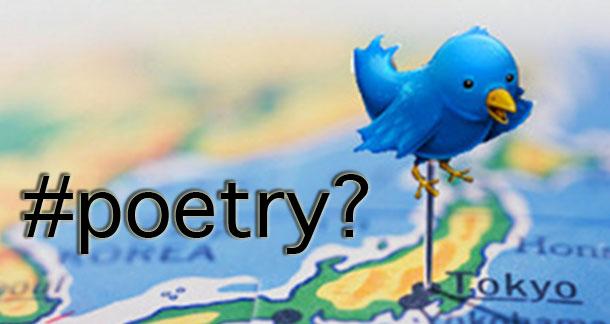 It’s December. It’s cold. You’re already sick of eggnog (or sick from eggnog), so let’s just have a little fun with a couple of literary forms—one older than old, and the other still just a toddler: Haiku and Twitter Hashtags.

Even if you’re not a Tweeter, you’ve probably noticed these little cross-hatched symbols pop up in text a lot more than they used to. This symbol has a variety of names and uses, the most common (here in the USA) are:

The most recent addition to the symbol’s repertoire is the “hashtag.” Twitter has commandeered this little checkerboard as a way for people to add searchable keywords, a.k.a. "tags" to their posts so that someone posting about #JustinBieber could have their tweet grouped with other like-minded tweets about the same topic.

Unsurprisingly, the hashtag and its usage have already evolved. In a post published at the New Yorker in June of 2010, writer Susan Orlean details a very different use for these versatile marks. Instead of keyword markers, words and phrases that follow the hashtag read more like commentary, or something “muttered into a handkerchief,” as Orlean puts it. The hastags set off a commentary, sometimes subversive, that adds a new level of meaning to the a relatively straightforward Twitter statement. For instance:

Of course, the idea is to slam the words together to maximize space in the 140-character limit and pretend that “#howaboutbaconflavored” is a searchable term, which, of course, it's not. If you want to read Ms. Orlean's examples, Here are links to the first blog post and a link to a follow-up that she posted shortly after.

Hashtag commentary is not a new idea; it's just a new way of setting off secondary ideas from the primary subject of a given text--in this case, the tweet. In the literary world, similar type commentaries are called “asides” and refer to a moment when the speaker turns away (literally or figuratively) from the scene and makes a comment to the reader or audience about what’s happening. Shakespeare and many other writers have used asides in their work to add an extra layer of complexity to a scene or passage. In a play, the aside offers a character the opportunity to say something either to the audience or to another character on stage that the other characters on stage do not "hear." Asides may reveal a character’s true emotion or other secrets about the story to the audience. Here's an example from Mr. Shakespeare's "Romeo and Juliet":

ABRAHAM
Do you bite your thumb at us, sir?

SAMPSON
[Aside to GREGORY] Is the law of our side, if I say
ay?

Note how Sampson's aside to Gregory determines his next statement. When confronted by Abraham, Sampson quickly assess his legal situation in a short aside to Gregory, which, we know by the notation "[Aside to GREGORY]" that Abraham does not "hear" the question. When Gregory clarifies the situation, Sampson modifies his tactic and denies that his threat was directed at Abraham. In this case, the audience also hears the aside and will understand that Sampson changed his mind. Had he not used the aside, the audience, as well as Abraham, might well assume that he never meant to be threatening when, in fact, he did.

The hashtag aside is a new, economical method of accomplishing a similar thing in a tweeted statement. If I just tweeted about Paula Deen's butter-flavored lip balm, it might be construed as an endorsement, or a simple announcement. Add the hashtag aside to the tweet, and my readers know that I am being facetious, ironic, or snarky.

Now for the second part of this post—Haiku. Haiku is a style of poetry that’s been around, um, forever. It is Japanese in origin, but these days you can find haiku on almost any subject in almost any language. The basic guidelines for a haiku stipulate that the topic be “nature” and the structure must be the following:

Here is an example of a traditional haiku. This was written in English

Whitecaps on the bay:
A broken signboard banging
In the April wind.

-Richard Wright (collected in Haiku: This Other World, Arcade Publishing, 1998)

Of course, because writers aren’t great rule followers, there are many haiku that are not about nature nor that follow the strict 5/7/5 structure. Just Google "haiku" and you'll find so many variations, you might not believe there is a format at all. In addition to haiku, there are numerous other short-form poetry styles. Senru, hokku, and renku are a few. I appreciate the short form because, like the 140-character tweet, economy of language is the key to it's success. Words must be carefully selected for maximum meaning and minimal length. What short forms show us is that a lot of meaning can be packed into a few choice words. I also like that the piece as a whole can almost be digested at once. A typical reader can grasp a tweet or haiku in a short glance and remember the piece in it's entirety with little effort.

Ok, here’s my hair-brained idea. Let’s combine the two forms: the 140-character Twitter post and hashtag commentary with the 5/7/5 structure of the haiku. In case you were wondering, I have tested this exercise before and it was pretty successful. Not to brag or anything, but I pretty much invented Hashtag Haiku (I think). Of course, I have no proof except for the members of my Seattle class with whom I practiced this new poetic form. Anyhow, I’ll get us started with some examples that I've created for you.

Now it’s your turn. You can write on any topic. This is just for fun. A little mind stretcher to keep you sane in this crazy and dark season. Share here in the comments section, or send me an email: taylor@litreactor.com

Clayton Blue from Arizona is reading Middlesex by Jeffrey Eugenides December 13, 2011 - 4:09am

I thought saying 'Hashtag' was gonna be apart of the haiku.

NotMarilyn from Twin Cities, MN is reading Mistress of Rome by Kate Quinn December 13, 2011 - 6:21am

Today while doing my hair

Haha! You can use hashtag as part of the haiku. You can hashtag the whole thing! The possibilities are endless!

5-7-5 as a requirement for haiku in English is really an urban myth, despite how widely most of us have been taught that way. They don't count syllables in Japanese, but sounds, and what they count is different from English syllables (the word "haiku" is two syllables in English, but counts as THREE sounds in Japanese). So it's misleading as a premise for haiku in English to refer to it as requiring 5-7-5 syllables. And no, those who don't write 5-7-5 are not breaking a rule. Rather, the "rule" was in error in the first place. Look at the three editions of Cor van den Heuvel's "The Haiku Anthology" (third edition was published by Norton). The vast majority of haiku in its pages are NOT 5-7-5. Same with the brand new Norton anthology, "Haiku in English: The First Hundred Years." For more information, please read "Becoming a Haiku Poet" at https://sites.google.com/site/graceguts/essays/becoming-a-haiku-poet, which talks about other issues that are more important than form (and seldom taught in schools). And no, strictly speaking, haiku is not really a "nature" poem; rather, it aims to have seasonal references, and while that often does bring in nature, nature itself is not the goal. Traditional haiku also require a two-part juxtapositional structure. And primarily objective sensory imagery. These are far harder goals to achieve than the triviality of counting syllables. Please also read any of the essays at https://sites.google.com/site/graceguts/further-reading, especially "Forms in English Haiku" by Keiko Imaoka and "What Is a Haiku—And What Isn’t" by John J. Dunphy.