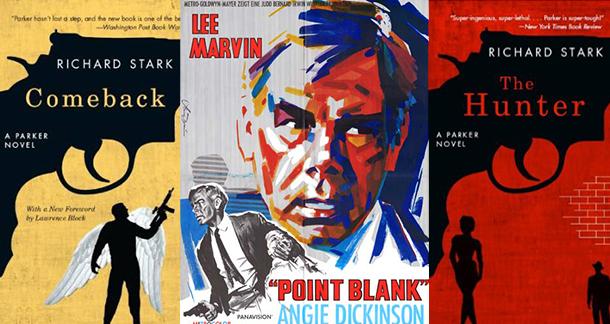 Mr. Carter frowned. "Doesn't he have a first name?"

"I don't know it, Mr. Carter. He never called himself anything but Parker."

And we don't find out much more than that. Parker, the ruthless career criminal, sprung from Richard Stark's mind fully formed and starred in 24 novels. The last was published in 2008, the year of Stark's death. Richard Stark was actually a pseudonym for acclaimed crime fiction author Donald Westlake, who used the name almost exclusively for Parker. From 1962 to 1974 he churned out 16 Parkers, but then both went into hibernation. It wasn't until 1997 that they returned with the aptly titled Comeback, with seven more released over the next decade.

What prompts an artist to return to an old work? Sir Arthur Conan Doyle resurrected Sherlock Holmes in "The Adventure of the Empty House" in 1903, in which it was revealed the consulting detective had not died in 1893's "The Final Problem". Stephen King returned to The Shining's Danny Torrance after 36 years with 2013's Doctor Sleep. And this year J.K. Rowling has written both a prequel to her Harry Potter series, the movie Fantastic Beasts and Where to Find Them, and a sequel, the play Harry Potter and the Cursed Child, nine years after Harry Potter and the Deathly Hallows. Whether it be fan demand or money or a compulsion to visit old friends, the mind of the author can never really be known.

What prompts an artist to return to an old work? Whether it be fan demand or money or a compulsion to visit old friends, the mind of the author can never really be known.

This kind of situation can have varying degrees of success, but what's unique about Stark is that Comeback doesn't miss a beat. That's a tall order, considering the 23 years that passed since Butcher's Moon. The world changed, and Stark knows it, acknowledging early on in third-person omnipotence that, "Even in a world of electronic cash transfers and credit cards and money floating in cyberspace, there were still heists out there, waiting to be collected."

Comeback follows Parker and allies George Liss and Ed Mackey as they rob Reverend William Archibald's massive evangelic event. Cash collections are taken at the gatherings, with the score amounting to more than $400,000 to be split between Parker, his partners and one of the reverend's confederates, Tom Carmody, that wants to donate his share to charity. Of course, as always, Parker is betrayed and spends the novel in and out of sticky situations trying to get his money and his revenge.

And the funny thing is, in a shallow sense that's the description of just about every Parker novel. The template is established in The Hunter that Parker pulls a job, is betrayed and fights to get back what he's owed. There's a bit of a throughline in the early books of Parker butting heads with the Outfit, the organized crime syndicate that he plows through to get his money back, but it's not exactly plot-intensive. So essentially each book is a remake of the first, with Parker remaining unchanged and adamantine across 46 years of storytelling.

So what makes him so compelling? As Neal Pollack explains in his 2011 article "Out of the Past" for Los Angeles Review of Books, "He conducts himself how you'd want to, if you had the guts and the sinew". Parker certainly taps into something with audiences, as there have been eight film adaptations (with many others loosely based on the character) of the books, the most notable being, of course, Point Blank (1967) starring Lee Marvin as Walker and Payback (1999) starring Mel Gibson as Porter.

As has been well-publicized, Stark never wanted a movie series and forbid the character from being named Parker, hence the changes, with only Jason Statham brandishing the moniker in the eponymous Parker (2013), released after Stark's death. While Stark once said that he envisioned a young Jack Palance as Parker, what every actor shares in their portrayal is a cold, hard bluntness.

That's the consistency, because Parker doesn't get much in the way of description. As Pollack explains, this brief description from The Hunter is one of the last given: "big and shaggy, with flat square shoulders and arms too long in sleeves too short ... his hands, swinging curve-fingered at his sides, looked like they were molded of brown clay by a sculptor who thought big and liked veins ... his face was a chipped chunk of concrete, with eyes of flawed onyx." This is due to him getting plastic surgery in the second book, The Man with the Getaway Face, but in such a way as to be negligible, as seen in Darwyn Cooke's graphic novel The Outfit that compresses elements of the second and third novels.

In fact, he starts off the series in an uncharacteristic state of flux: he's married and gets shot and arrested all in a short span of time. Although he has been hurt in later books, imprisoned one other time, and lives with a woman named Claire Carroll, he's never as human as when he allows someone close enough to marry him, only to be shot by her. One could posit this incident is what makes him such an immovable object, but all signs point to him having been a ruthless bastards for decades prior.

A few of the details that Stark divvies out about Parker is his service in the Army from 1942-1944 (Payback has Porter sporting a USMC tattoo), a dishonorable discharge and immediate segue into crime. So exactly how old is Parker in Comeback? He seems perpetually mid-30s, much like comic book characters such as Batman and Superman. A literary peer would be Jack Reacher, whom Lee Child introduced in Killing Floor (1997) as 36 years old and over time has de-emphasized his age. Stark's similar tack was to simply not acknowledge age at all, as serving in World War II would put Parker in his 70s by Comeback.

What can be parsed of Parker is that he is a shark. He's not exactly immoral but rather amoral. There's never a question of good and evil in him, and the world reflects that. For instance, in Comeback no one ever questions robbing a holy man, even if said holy man is proven to be swollen on his own coffers. Parker, meanwhile, likes to live comfortably but not lavish. He has a lakeside home but never allows greed into the equation. When his savings dip below $5,000 it's time to do a job, but there's never any yearning to live large or even to be set for life. He's short on conversation, only craves sex in the aftermath of a successful heist, and yet there's never an indication of thrill seeking. Stealing is a means to an end, and long ago Parker decided societal rules are just a fictional construct.

But he's fair and he's skilled. He respects loyalty and has acquaintances, if not friends, that he can rely on. That's true of Ed Mackey whom he's worked with before, and he accepts George Liss on Mackey's recommendation. It's a pay-it-forward system for these "mechanics", who only trust those they've worked with before, begging the chicken-and-egg question of how does one break into the business. As well, he doesn't kill if he doesn't have to, not taking pleasure in arbitrary murder, but won't shy away from it out of a sense of pragmatism.

Certainly there are the above mentioned reasons why an author would return to a character, even after so long of a time, but why the reader? In other mediums, especially movies, sequels are greeted with trepidation by a wary audience. Some have expressed exhaustion with the interminable output of the likes of Marvel's shared cinematic universe, with two and even three movies a year creating the big-screen equivalent of television seasons. On the flip side, long gaps in-between sequels can also be a warning sign, with last year including a mixed bag of follow-ups: Mad Max: Fury Road, Creed and Star Wars: The Force Awakens embraced by the people, while the likes of Terminator: Genisys was thrown by the wayside.

But literary shelves overflow with everything from Travis McGee to Alex Cross. Especially when it comes to crime fiction there's a readership that welcomes new entries with open arms. Now some of these may be what I like to call the "airport crowd", which is not a term of disrespect but refers to the quick picks a traveler might grab at an airport book store. But what's refreshing about this kind of (usually) paperback is its accessibility. Comeback shines because it isn't reliant on continuity, instead providing the most barebones information necessary to ascertain the situation while treating the earlier books as history and not exposition.

Consequently, Parker's adventures aren't terribly challenging. They're not ruminations on the existential milieu of modern existence. What they are is pulp through and through, but there's no shame. A Parker novel will promise consistency, yes, but that means tight pacing, well-oiled plots, darkly ironic humor, crisp dialogue and compelling professionals that are good at their jobs. Half the fun is seeing Parker's airtight plans unravel as some unknown parameter is thrown into the mix.

Comeback in particular has new treasures to offer up, even this late in the game for Stark and his pet character. There's a startling and painful murder of a female character that uses scientific accuracy to make the skin crawl. There's a uniquely disjointed narrative structure, possibly influenced by Pulp Fiction released just three years earlier, that starts in medias res then backs up to introduce the characters, then switches to a bumbling trio of thieves and the head of security for the reverend that sees Parker "offscreen", only for him to be reintroduced from another character's perspectives. And considering Parker never changes, it's a pleasure to experience these one-off characters with their provocative flaws and skills.

So while half the joy of Comeback is its effortless return to form, the other half is knowing Stark wrote it for the right reasons. His books were always popular but there wasn't exactly an uproar for a reprisal. Consequently, there was no guarantee of a pot of gold, especially since Westlake's career had stayed vital and fruitful. But without armchair psychoanalysis, it's easy to understand that a grim presence like Parker can't be buried forever. He's bound to show up again someday, demanding his due.

Thanks Dave, I do what I can!