Growing Up Star Wars: A Lesson In How To Indoctrinate Your Child 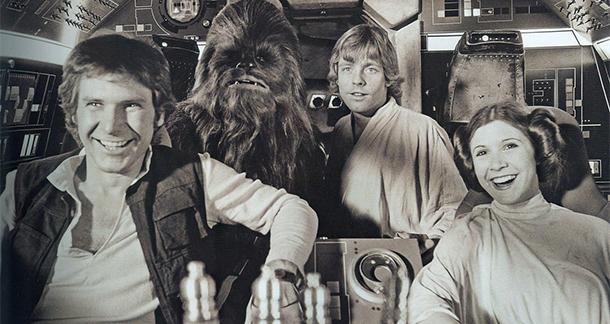 I was born in 1979, two years after the original Star Wars came out and changed everything. Movies, books, theater...Star Wars really did it. You don't need me to tell you this.

I was so young, I didn't get to experience any of the original trilogy in theaters. I never got to wait in line. To see the costumes. To feel the breathless anticipation and the thrill of those amazing first words flowing up the big screen.

A long time ago in a galaxy far, far away...

All I remember was never having not seen Star Wars. Any or all of them. They were all a part of my childhood, ingrained there like the chicken pox virus and my multiplication tables. I dreamed TIE fighters. I doodled the Millennium Falcon. I knew the story forwards and backwards and forwards again.

A long time ago in a galaxy far, far away...

To me, they were among the most beautiful words ever penned. 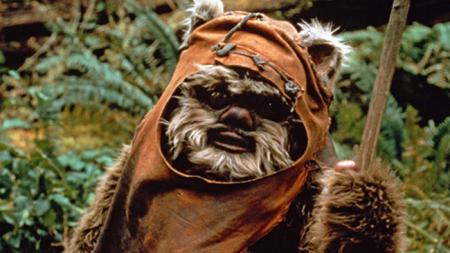 We didn't own the original trilogy in any official way. Instead, we recorded them from HBO, and I wore out those tapes! Every sick day, every day off from school, chances are, a Star Wars was on. I loved Return of the Jedi best (what can I say, I loved the Ewoks, and I loved that Han and Leia finally got together), followed by A New Hope (though, of course, we didn't call it that back then). The Empire Strikes Back was a little dark for me, perhaps, and a little sad, so I watched that one least. But still. I watched it. A lot. Never in order or anything, but picking and choosing the bits and scenes that made me happiest, I learned the stories like I had never learned any before. I learned how a simple idea (good vs. bad, dark vs. light) could spawn a dynasty.

What a great lesson for a writer, not even beginning to stretch her wings yet. Those stories soared, and with them, so did I.

Flash forward a few years, to the release of the dreadful prequels.

The Phantom Menace came out while I was on the honeymoon for my first marriage. I was devastated that we couldn't go see it on opening night, since we were "stuck" in the Bahamas. Perhaps this should have been an omen for a doomed marriage (for doomed it certainly was), but I didn't see it that way. I just wanted to see a new Star Wars!

We went to the theater on the day we got home, at my insistence. The experience itself was a bit of a letdown. No lines, no costumes. We had the anticipation, but not the crowds. Still, I had never seen a Star Wars in a theater, and I remember when the words crossed the big screen for the first time in my life.

I cheered. I really did.

And then the movie started and disappointment set in, and I thought my love of Star Wars could never be the same.

I don't need to delve into the problems with the prequels. We all know exactly what was wrong with them, and why we all (mostly) hated them. Bogged down in backstory and wretched dialog that rendered even the most talented actors stony-faced, they broke my heart, more with every new release. How could a story that had once flown now be so mired in the muck?

Flash forward a few more years. I was married again, in a much better match this time (yay!), and we were going to have a baby. We lived in a house full of stars - Star Wars, Star Trek, action figures and comic books. We knew our child would grow up surrounded by our love of all things nerd, that she would never not know Star Wars.

But the question surfaced: How to introduce her to it, knowing there was a set, linear narrative, intended by its creator, but also knowing we couldn't stomach her introduction to our favorite series through the face of Jar Jar Binks. Should we start where George Lucas said the beginning was, with young Annakin and Padme and Ewan McGregor? Could that possibly foster a love of the movies we held so dear?

Or should we start where we each started, with Luke and Leia and Han, and only then, once she loved the original trilogy as much as we did, would we allow her to see the flashbacks. The backstory. The muck and the mire.

The answer was clear.

We started with A New Hope, and went from there.

The narrative works, as far as narratives go. We saw the work of the Empire and the Rebellion, then flashed back to those times when Jedi were plentiful and the Emperor was a mere Senator.

I expected my child to love the originals and hate the prequels, just like me. But then, the first time we sat down to Phantom Menace, I realized: Annakin is a cute little guy, and Jar Jar is meant to appeal to the kiddos. Muck and mire be damned! Screw the story! Fuck the heartbreak and sloppy story telling. There was a cute boy! A pod race!

To this day, Phantom Menace is my child's favorite Star Wars.

So would she have loved the entire series had we shown her Phantom Menace first? Would she ever have needed more beyond the pod race?  I'm not sure. At least one of her friends had to be coaxed into watching more Star Wars flicks after starting with Phantom Menace. As a standalone start to a narrative, then, I'm still not sure that it works.

But my child loves it.

She loves it all. She doesn't care about the order of the stories. She, like me, watches them whenever she feels like, in whatever order she wants, picking bits and bobs of her favorites to learn to love the entire thing. 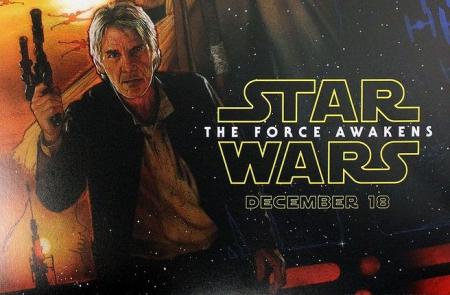 This weekend, we got to experience a new Star Wars flick as a family. For the first time ever (for all three of us), we were out there, lined up on opening night, to see The Force Awakens. It was a chilly night here in Charleston, and we were all dressed for the occasion. I wore a Boba Fett tank top (to appeal to my husband's Boba Fettish) and braided my hair in a very Leia-way. My husband wore his favorite Boba hoodie.

And my child? My sweet little girl?

She was Darth Vader.

I couldn't have been more proud.

We shivered with cold and excitement while we waited to be seated. We chatted with the fans around us. We experienced Star Wars as a family, and it was really something.

Then those words crossed the big screen...

The theater erupted in applause. Beside me, in the dark, my child sat rapt, clapping, her little face glowing in the faint yellow light.

And for the first time I realized: there's no right answer of course. In parenting, nerd or otherwise, there never is. However you introduce your child (or yourself) to these movies, chances are you'll find something to love, someone to root for. We watched the new movie, met new characters, cheered when good things happened, grinned during the homages to the originals.

"I've got a bad feeling about this."

"May the force be with you."

"Seduced by the dark side."

We, as a family, have grown up Star Wars. It's a part of who we are. We've experienced it all now - the thrill of opening night, the heartbreak of death that's still too raw to talk about. These movies are a part of our family, and in the end, it didn't matter how we introduced our child to them. The point is we did introduce her. We now share this thing we love, this thing that makes us laugh and cheer and cry and yell.

I don't know what'll happen with the franchise moving forward. There were certainly things I didn't like about The Force Awakens, and I'm sure nothing will ever, for me, match Return of the Jedi. But we will share the future as a family, and the future looks mighty entertaining.

Why Do We Read Novelizations?

How Backstory Almost Totally Fucked Up the Star Wars Franchise: A Lesson for Writers

Dino Parenti from Los Angeles is reading Everything He Gets His Hands On December 23, 2015 - 9:16am

I was born in 1972 but didn't see episode 4 until after I first saw episode 5 in the theaters. But I knew everything about A New Hope (it wasn't called that yet) just by osmosis on the playground at school. Even relayed through the choppy inconsistency of other five-year-olds, I was fascinated by all things Star Wars before I ever saw one foot of footage. I think it either shoots into your bloodstream easily, or you have an immunity which I liken to being one of the unfortunate few to survive a global superflu that kills 99.9% of the world.

One more thing. I saw Empire and Jedi in the theaters (both on opening day), and no one dressed up or weilded light sabers as far as I can remember. At best, I can recall seeing a t-shirt or two. It took the prequels before I saw all the cos-role play stuff blow up in earnest. It's an interesting generational comment that might be explored in a different column by more qualified people than myself:)

Thanks for posting this!

Great read Leah, I've so far only shown my 3yr old daughter A New Hope and am waiting until she's a little older to move onto Empire as I want her to fully comprehend the whole "I am your Father" moment. At what age was your daughter when you showed her each film?

I felt the same way about the prequel and I couldn't stand Jar Jar Binks. But last night we watched it with my kids (5 and 9 - they've seen the originals) and I saw it a completley different way like you did. A little kid - an awesome race - my kids find Jar Jar funny... I apprecaite it now. Ultimately, they love R2D2.

@Matthew - I'm honestly not sure how old she was. I just asked her and she said, "Probably 3 or 4," which is a guess I agree with. We had them on often for ourselves, so she just sort of absorbed them. Ya know?

@Kathy - isn't it funny, how different it is to watch Jar Jar with a giggling kiddo? It kills me. I mean, I still can't stand him, but man, hearing her laugh at him is hilarious! :D Thanks for sharing!