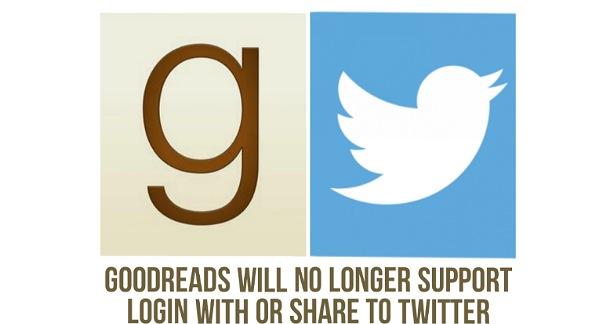 In early 2021, Goodreads is expected to remove a lot of its Twitter functionality, including the ability to share directly from within the social platform. Why is this significant? Let’s get into the meat and potatoes of it.

Goodreads is the world’s largest community of book lovers. They have over ninety million users that show off their shelves. The site was developed by Otis Chandler in 2007 with the intent of creating a community where readers could come together and discuss literature. Today, the site boasts that more than twenty-thousand book clubs are hosted on its platform. Some of those book clubs have tens of thousands of people in them. That is an impressive number and poses a big opportunity for authors and publishers. Here we have a massive online community whose sole purpose is to promote reading and encourage book talk. There are a tremendous amount of authors who contribute part of their success to the promotional work done at Goodreads. This is obviously not a bad thing.

What we are seeing now, though, is that this platform is making changes that have consequences for those who rely on it. It’s not the first time either. In 2017 the site decided to monetize something authors previously did for free. Giveaways were just another tool in an author's promotional toolbox, but since Goodreads started charging for this feature, it’s become too expensive for indie authors to use. This appears to have started in March of 2013 with Amazon’s acquisition of Goodreads, and has slowly but surely shown users that corporate greed has a firm grip on its operations.

Complaints of glitches and design flaws have been made for years, most of which the platform disregards, leaving users frustrated, to say the least.

There is no better time to support authors than right now. According to a 2013 article by Forbes, "There are somewhere between 600,000 and 1,000,000 books published every year in the US alone…" This goes to show how hard it is for authors to make money in a saturated market. We need to make sure their writing gets noticed so they can keep crafting the amazing work we love so much. A social platforms like Goodreads is one of many ways to promote a writer's work. The ability to share on Twitter greatly improved that promotional capability. When users connected their Twitter account to Goodreads, a plethora of options became available which included automated shares. Every time someone added a book to their shelf, finished a read, or wrote a review, it would be shared to the user's Twitter feed. There is so much power in that function. Let’s say, for example, you have four hundred friends on Goodreads. When you reviewed a book, your four hundred friends would see that review. Now, let’s say that the same user has another five hundred Twitter followers. They would also see a link to that review. That is some impressive exposure for an author, especially if any of that user's friends decided to add that book to their shelves which again gets shared to Twitter. It has a compounded effect that can help readers discover new authors.

There is a lot of confusion around why a social platform this large would make a move that could ultimately cut-off a source of traffic. Like most sites, Goodreads relies on traffic to produce its estimated annual revenue of twenty million dollars. When users share to Twitter, a backlink is produced that brings people from Twitter to Goodreads. There are a lot of Search Engine Optimization experts that suggest that the number of links shared on various social platforms can increase a site's overall website search ranking. It baffles the mind to think of why an organization would essentially hinder its ability to drive traffic. Although they have not stated exactly what the reasoning is, there is speculation that it’s simply a development issue. Twitter launched a version two application programming interface recently which would require a development effort from Goodreads that they must not be willing to make. This is not surprising as recurring patrons of the site will attest. Complaints of glitches and design flaws have been made for years, most of which the platform disregards, leaving users frustrated, to say the least.

Removing the Twitter share function is another unsolicited attack on authors that rely on any exposure they can get. This simple automated mechanism has the capability to get an author's name in front of potential readers. There are a lot of unanswered questions as to why a social platform as large as Goodreads would disable something with the potential to bring in new users, increase traffic and help with the sustainability of the site. This is not to say that we should not support the organization. It still does a huge service for authors and publishers. Goodreads might have taken automated sharing away from its users, but you can still send a tweet to your followers about what you're reading, if you enjoyed the book or not, and share a review. Let's keep the momentum going that Goodreads started in its conception. Use Goodreads but don’t limit a book's potential reach—share your experiences everywhere for the sake of all those who craft stories for our entertainment.

What a great testimony I would like everyone to read and follow the instructions to get cured from HSV1&2. I got a diagnosis of HSV1&2 March this year and I have been taking pills to prevent an outbreak. I never stop searching for a cure because I strongly believe that there is something somewhere that can get rid of it completely and in August this year, I ran through some comments on Youtube about Dr Osato herbal cure and a lot of people commented about him having the herbs that can get rid of herpes completely. I was excited and I contacted Dr Osato and ordered the cure for myself and he sent it to me through UPS and gave me instructions on how to take it which I rightly followed and behold I went for checkup after two weeks of taking the herbs and my result shows NEGATIVE. My doctor confirmed with me that I am totally clear from HSV1&2. You can as well contact Dr Osato to get the herbal cure from him. His email is osatoherbalcure@gmail.com or WhatsApp him on +2347051705853. Dr Osato also has the cure for the following virus/diseases HIV, HPV, HSV1&2, DIABETES, CANCER of any kind, GENITAL HERPES, COLD SORE, VAGINAL INFECTION, ECT. His website is https://osatoherbalcure.wordpress.com