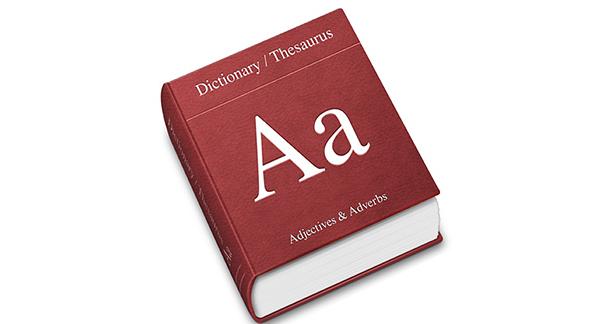 One hallmark of bad writing can be found in descriptive passages that rely heavily on modifiers. Adverbs and adjectives are necessary in language — I’ve already used both, in the first two sentences of this column — but used too often, they contribute to uninspired sentences and an overall sense of descriptive flatness. They don’t convey the specificity or immediacy that’s needed in storytelling. As such, you should kill them whenever you can.

Sentences that force your readers to reach for a dictionary are usually a bad idea.

A lot of beginning writers have a penchant to use modifiers with abandon. Needless to say, sentences that force your readers to reach for a dictionary are usually a bad idea, but I don’t think that's the intended goal in most of these cases. I can only speak from personal experience and say that, because I knew modifiers’ role in language was to qualify an action or object, I presumed that meant they specified them, or gave added emphasis. Unfortunately, the opposite is often true. Modifiers do very little in a sentence; usually, they can be removed without changing a sentence’s meaning at all. If your descriptions rely too much on these unnecessary add-ons — if you’ve simply given us a general statement and tacked on a modifier at the end, in other words — the resulting passage will probably be unclear and verbose. Compare the two examples below. As you can see, adverbs can tempt writers to resist hunting for the right verb that would have otherwise driven a sentence home.

Bad
He ran down the stairs quickly.

Better
The stairs flew beneath him.

Another reason modifiers won't cover your descriptive bases is the fact that they’re unimaginative. Adjectives are easy; it doesn’t take much effort to open a thesaurus and find a provocative word. It’s much more difficult to find the right noun or verb that perfectly pinpoints what you’re trying to say. Instead of relying on two-cent adjectives, you should look for verbs that have vigor, and nouns that invoke unique images.

Bad
Her erubescent face gave her the appearance of a stop sign.

Better
Her rashed face gave her the appearance of a stop sign.

Nailing a descriptive passage takes a lot of work, but the more concrete and stimulating your words are, the more likely the reader will grab onto them. Get specific, get close, and draw an image as accurately as possible of the thing or event you’re trying to describe. Choose your verbs carefully. The best verbs imply movement; they suggest that your characters are in motion.

Better
She flashed a row of teeth.

Also, make sure your descriptions arouse the senses. When you appeal to our sensory faculties you’re telling us not only how something looks, but you’re asking us to imagine how something feels. Appeal to as many senses as you can. It makes a difference.

Moderately bad
It was incredibly hot in the city.

Better
The pavement released its heat in waves, fanning an asphalt wind over the city that pulled at the throat and sat in the lungs like a fume.

As you can see from the above example, I used figurative language to usher in some extra descriptive strength. Simile and metaphor are great. They turn statements into comparisons, establishing relationships in otherwise dissimilar things, which causes the reader to see a small part of the world in a different way. If you really want to be imaginative and economical in your descriptions, try using a metaphor as a verb.

Bad
He beat on the floor with his fists like a drum.

Better
He drummed on the floor.

When you’re looking at a draft of your work, always ask yourself: is it possible for me to ditch this adjective in exchange for a noun that offers the reader a better image? Am I using this adverb simply to modify a vague and general verb? Are the verbs I’ve chosen the most accurate I can find in depicting the action on the page? Do my nouns accurately describe my subjects? Has my writing stimulated the senses? And does it highlight causal relationships that provoke a reader’s imagination?

Is it possible for me to ditch this adjective in exchange for a noun that offers the reader a better image? Am I using this adverb simply to modify a vague and general verb?

This is where I add a disclaimer. I love adjectives. Absolutely love them. I have this notebook I carry around so I can write down ridiculous words I’ve never heard. I subscribe to dictionary.com’s “Word of the Day” email list. I’ll admit it: adjectives are fun. And, if you could see my first drafts — which you won’t — you’d see they’re hilariously verbose, and more often than not, crammed with modifiers. For me, it’s second nature to use them when I’m writing in a hurry. It’s certainly easier than waiting around for the right noun or verb. In other words, the adjective works like a place-marker when I haven’t yet found the right way to express the action or object on the page. I’ll take care of them later, in a rewrite, when I have the words (hopefully) to do it. Given my secret love for adjectives, I still know it’s going to be far more clumsy to write, for example, “he answered the customer’s questions with alacrity,” than it is to think about the action I want to describe, and produce something like “he answered the customer’s questions with prompt fluency.” My first priority is always to describe with precision and clarity.

This doesn’t mean you should delete every modifier in your work. There are some great books out there that are stuffed with them (Ray Bradbury’s Fahrenheit 451, or Will Self's Great Apes in particular, are both loaded with adverbs). If your story is really good we might overlook them entirely. Just avoid modifiers when you can. Allow them only when it’s absolutely essential to the strength and clarity of your sentences. Use them, but don’t push your luck.

Carly Berg from USA is reading Story Prompts That Work by Carly Berg is now available at Amazon January 30, 2013 - 9:48am

Took lots of notes with this one, I love the technical essays. Also - good point about writing in a hurry for those first drafts and coming back to them later.

note to self -- SEARCH AND DESTROY: "erubescent"

I may come back and explain my position more thoroughly. For now, I'm just going to say that I agree with this article in spirit but disagree with every example.

I... hate every single example and think some "bad" ones are better than the "good" ones, but I agree in spirit so there's that.

The pavement released its heat in waves, fanning an asphalt wind over the city that pulled at the throat and sat in the lungs like a fume.

Oh mercy! My first trip to NYC - in mid-July.