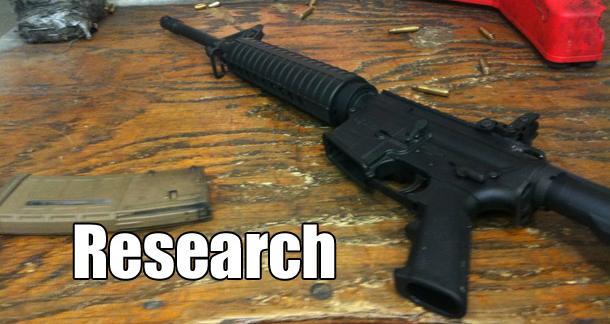 A couple of months ago I was in Texas visiting my brother. On my list of things to do, after eat at Amy's Ice Cream and get some hardcore barbecue was visit a gun range. There were three reasons I wanted to do this:

That last one is important. I skew toward crime fiction, and I believe that if my characters are going to be firing guns, I should know what it's like to fire a gun. How else am I going to write about it in a convincing manner?

The internet is an amazing resource for information. You can find just about anything you'll ever need to know about anything. The internet can teach me about the history of the AR-15 and its caliber and other fun facts. But nothing I read is going to approximate the feeling of actually firing it.

Part of your job as a writer is doing research; you don't need to be an expert on everything you write about, but you have to know enough that you can make what you write believable. As a writer, you're an observer, filtering your experiences and reproducing them on the page. And if you're going to do that authentically, you need to close the laptop and venture out into the world (after you read this column though).

Forget the damn internet, the best research for any writer can be achieved simply by being a good listener. If you're respectful and willing to listen, you can get almost anyone to open up about almost anything.

And she is absolutely correct. Interviews give you a lot more than just facts and figures. They give you the benefit of seeing how people carry themselves, how they speak, what they hide and what they don't.

Interviews can be a bit tricky. As a former cop reporter, and then a political reporter, I interviewed a lot of people who didn't always want to tell me the truth. Here are a few tips on how to do it, if you're new to the game:

And don't ever assume people won't want to talk to you. About six or seven years ago I was covering a story about the murder of a young woman, and I interviewed the victim's brother. A few weeks later the cops arrested him for killing her. He killed his sister the day before, and was still willing to sit and talk to me.

Most people will talk as long as there's someone to listen.

For the books, for you, to get things right, I went to Skid Row at midnight, coursed the streets of South Central in the wake of the 1992 riots, talked with survivors and convicts, went to jail – a visitor – rode along with the police, hung out with D.A.s, took the Cook’s tour of the LA County morgue, followed a murder case from “wet spot” to death penalty, and so on.

This is mystery author Wendy Hornsby, writing about her research process. And damn, does she cover her bases.

Talking to people is good. Serving as witness is even better. A cop telling you about patrolling a neighborhood is one thing; seeing him or her do it is quite another. And really, how convincingly can you write about things if you don't experience them?

Writing is a very lonely, very solitary process--unless you write at Starbucks. Doing research is a fun excuse to go out and get some exercise and see things you wouldn't normally see. For the book I'm working on, I've hopped on subways and walked through neighborhoods I wasn't familiar with and stopped in bars, all so I could see the things my protagonist would be seeing.

It may seem a little difficult and intimidating to find these opportunities, like riding along with a cop, but it's really not that hard. It took me one Google inquiry (NYPD ride-along) and less than two minutes to find the link for the New York Police Department's Civilian Observer Ride-Along Program. If you're interested, here's the link.

Or, you can always just call your local courthouse/police station/hospital/circus to see what kind of opportunities they have. Being nice, respectful and interested can open a lot of doors.

You don't get anything that you don't ask for.

I spent four years on and off in that part of Western Kansas there during the research for that book and then the film. What was it like? It was very lonely. And difficult. Although I made a lot of friends there. I had to, otherwise I never could have researched the book properly.

That's Truman Capote, talking about his process for In Cold Blood. Capote didn't just visit Kansas. He went and lived there. This is a step further than what Hornsby was doing in the above example. Capote wasn't just following the lives of these people, he was living with them.

Not everyone has this luxury; you can't decide you want to write a book about Paris and then pick up and move there for a month. At least, most people can't do that. But, hey, if you're really passionate about it, maybe it's an idea worth exploring.

Just think about the opportunities something like this can offer: The chance to see how things work when no one's looking. To walk down the side-streets that no one visits. To see the quiet moments, when everyone's guard is down.

There's a book I want to write that's partially inspired by a commune in Georgia I spent a few nights at, a couple of years back. And before I write that book, I plan on going back. For a week, at least. And I am super excited. Not just because it's a cool little scene, but because it'll give me a chance to experience a way of life that's extremely different from mine.

By living with the hippies, I hope to learn their secrets. In the end, I believe it'll lead to a better book.

You don't have to live with hippies to write about hippies, but it certainly helps.

I talked a little bit about research methods/places that I've used in my own work. Now it's your turn.

Tell us about research you've done in your own writing; real places you've been to or real things you've done to inform your work. Let's turn this into a learning experience that we can all share.

Got a tip for interviewing, or a place to score information?

Ever plan a vacation for the sole purpose of figuring out a story?

Did you ever shoot a man in Reno just to watch him die?

Tell us about it in the comments.

All good points. You've got to experience something if you want to write about it with any kind of authority. Vicarious accounts just aren't the same. I've spent some time visiting locked mental wards—not by choice, and not for the express purpose of research for my writing—but it certainly came in handy as I wrote my novel. I don't know if you'd be allowed to visit if you didn't have a friend or family member there, but it's always worth asking.

Superb article, Mr. Hart. Truly great advice (regardless of the field it's destined for) is also good advice for life: be nice, be respectful, be you. Listen. And get off the dang computer. I totally agree. As for my own interviewing experience, it's rather limited, but I find what you said is true: it's incredible how much people are willing to talk.

I once interviewed the editor of an S&M magazine and I had no idea about that or anything in the hardcore sex world. I'm just not that way. And certainly not about talking about it, even if I was. But I approached it with a genuinely curious and respectful attitude and got more info than I would ever want. And a sample magazine with a reprint of my article that had some photos I wll unfortunately never un-see.

Yet here we are, 10+ years later, and I still remember it as a positive experience.

misterwoe from Kansas but living in Athens, Greece is reading Perdido Street Station by China Mieville, Inside the Third Reich by Albert Speer, A Wolverine is Eating My Leg by Tim Cahill February 18, 2012 - 4:43am

Excellent article. I've conducted plenty of interviews during my newspaper years and freelance.

INTERVIEW TIP: Always do whatever research you can beforehand. This will help establish credibility and rapport with the interviewee, and if you've done your homework, you'll get more out of the interview.