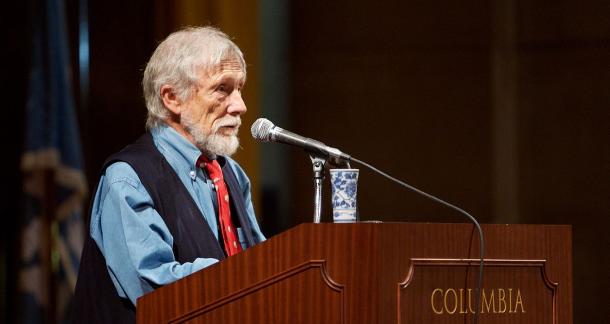 Gary Snyder is one of the last living members of the Beat Generation. Sort of. He is alive—he turns 91 this month—and he knew many of the most famous Beats, like Kerouac and Ginsberg. But he might best be described as a not-quite-Beat.  His birthday makes this a great moment to look back on the storied and complex career of one of the massive figures in American letters, and the ways he’s distinct from many of his famous peers.

He was born in San Francisco and spent much of his youth in the Pacific Northwest, including a spell at Reed College where he met fellow Beats Lew Welch and Philip Whalen. Snyder then moved to San Francisco and became part of the counterculture in the Bay Area, taking part in the legendary Six Gallery reading in 1955, and inspiring Jack Kerouac’s character Japhy Ryder, the protagonist of The Dharma Bums (1958).

Despite this involvement with Beat Generation legends, Snyder always remained his own man, and pursued his literary and cultural interests in his own way. For example, in 1967, while Allen Ginsberg was leading Tibetan chants to help Abbie Hoffman try to levitate the Pentagon, Snyder was in Japan developing his back-to-the-land style of environmentalism.

Snyder did not fall victim to many of the ephemeral excesses of the time, which I think makes his poetry and philosophy distinctive from his Beat contemporaries.

The counterculture of the 50s and 60s largely centered on urban environments, most notably San Francisco, and Snyder did spend some time as a part of those movements. But from around 1970 he spent more of that time living separated from society, in the foothills of the Sierra Nevadas, on his estate called Kitkitdizze. He was so remote, in fact, that when he won the Pulitzer Prize, it took some effort to actually get the news to him.

His most distinctive attribute, though, may be his dedication to Zen Buddhism. Many of the Beats had an interest in Zen, but no one pursued it like Snyder. He studied Zen academically and pragmatically, taking courses at UC Berkeley and spending a significant amount of time in Japan. Buddhism would become a major part of his life, and influence not only his poetry but much of his other philosophy.

In short, Snyder did not fall victim to many of the ephemeral excesses of the time, which I think makes his poetry and philosophy distinctive from his Beat contemporaries.

Perhaps as a result of this distinctiveness, in the 70s and 80s Snyder’s career reached new heights while the counterculture inspired by the Beats waned. He won the Pulitzer Prize for his poetry collection Turtle Island in 1975 and the American Book Award for Axe Handles in 1984. In 1987 he was inducted into the American Academy of Arts and Letters. And these are only the three most prestigious of his many awards. No other writer associated with the Beat Generation has received so many literary accolades, and perhaps it took a not-quite-Beat to get their work awarded at the highest levels.

The best way to see this is, of course, through Snyder’s work. I recommend Turtle Island to everyone, it’s a deserving winner of the highest literary prize in the country, and one of the best poems, “I Went into the Maverick Bar,” is available to read here. “Maverick Bar” has many traits associated with Beat writers, like the syntax of everyday English and the imagery of that era’s counterculture (long hair, earring, etc.). There’s also the grand image of America, the freedom it offers, and the conflicting feelings about it:

I recalled when I worked in the woods

and the bars of Madras, Oregon.

That short-haired joy and roughness—

I could almost love you again.

It’s easy to see that stanza, especially the last two lines, as something similar to what Kerouac would write. But Snyder’s work is also more introspective than a lot of Beat writing:

In the shadow of bluffs

I came back to myself,

To the real work, to

This is not to say that Ginsberg, Lawrence Ferlinghetti, Diane di Prima, or Amiri Baraka were never introspective, of course they were at times, but Snyder tended to integrate these kinds of sentiments into his poetry more than his contemporaries. The above stanza is representative of the way he does so.

Another aspect of Snyder’s writing that separates him from the Beat Generation is his prescience, especially when it comes to environmentalism. Like with his poetics and association with Zen, Snyder wasn’t dissimilar from his contemporaries in this regard, but he went further than they did, and time has shown that he got a lot right. Turtle Island, again, is a fine resource, as it includes the short essay “Four Changes” which Snyder had originally published in 1970 as part of the lead-up to the first Earth Day. Consider some of these lines:

“We are fouling our air and water, and living in noise and feel that no ‘animal’ would tolerate, while advertising and politicians try and tell us we’ve never had it so good.”

“…conserve Energy. ‘Do more with less.’ ‘Convert waist into treasure.’”

This rhetoric, though written as part of a nascent movement over 50 years ago, would fit in to today’s environmental discourse. While a lot of Beat literature holds up well—I still love perusing On The Road—not as much of the life philosophy of the Beats does. Snyder’s, however, still feels relevant. And he has released updated versions of “Four Changes” over the years to reflect how the struggle for environmental justice has developed.

When he won the Pulitzer, Snyder said that the best perk of that prize was that he no longer got introduced as a Beat poet. This statement doesn’t reflect an animosity towards the Beat writers, but rather that Snyder himself didn’t fit neatly into that generation. He was a not-quite-Beat Generation writer. It’s worth diving into his canon both for fans of the original hipster culture of which he was a part, and also for anyone looking for a poet and thinker of the highest quality—one who can’t easily be categorized.

Get Turtle Island at Bookshop or Amazon