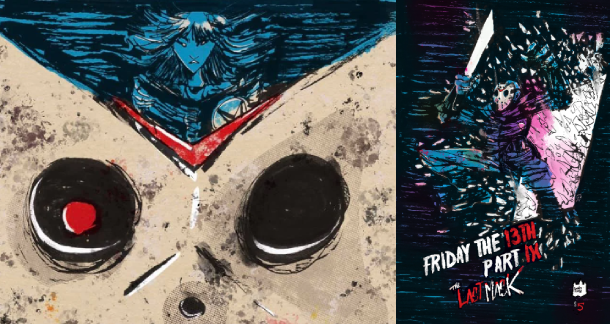 Sometimes you just wanna play with someone’s else’s toys, especially when you don’t have their permission.

I recently published a bootleg comic book called Friday the 13th Part IX : The Last Mask. It’s a bloody, loving tribute to Jason Voorhees, one of pop culture’s most enduring boogeymen. I don’t own the rights to the character of Jason, or to the title Friday the 13th, but I wrote and drew the comic anyways.

Because I ran out of ideas of my own?

Because I got really good at drawing that hockey-mask?

Sure, but I also made this bootleg comic because I love the mythos of that maniac, and because I’ve done my share of creating analogues for various existing pop culture characters, and I wanted to know what the results would be if I fooled around with the real thing for once. 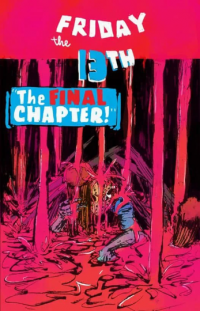 Friday the 13th also proved to be the perfect vehicle for this experiment from a marketing perspective, since the rights to the franchise and its star Jason Voorhees continue to wallow in legal murk as various creators and producers war over who owns which pieces of the puzzle. Meaning that there haven’t been any new (official) Friday the 13th films since the somewhat underrated 2009 remake.

Filling that machete shaped hole have been projects like the popular (albeit short-lived) online video game, which became a casualty of the aforementioned legal battles, as well as a bevy of fan-made films currently flooding YouTube. It made me think of Prince’s immortal lyric from “Get Off”, “There’s a rumor going ‘round that you ain’t been getting served…”

All of this makes it sound like I’m pretty saavy about the industry, but what really motivated me was how much I love the franchise and because – most importantly – I had a good story to tell.

And it was a story that benefited most from using the real characters of Jason Voorhees, his murderous mother Pamela Voorhees, and the various final girls who have populated these films.

Sure, I could do a creative analogue which would result in something interesting. I’ve done it before. My first novel, Nefarious Twit, revolved around a Shel Silversteinesque children’s book author who was fleshed out with a dash of Ronald Dahl and some others. My comic book Serious Creatures told the story of a teenage special fx artist named Bobby Feckle working in Hollywood in the late 70s, and his career very closely mirrors that of Rob Bottin, special fx legend of The Thing and The Howling fame. There’s also my novel An Augmented Fourth, which centers on a heavy metal band called Frivolous Black, which essentially fills the spot in music history occupied by Black Sabbath.

With all of these creations, I take inspiration from the source material, but also leave out details I don’t want and add in others. Sometimes I create composites with similar figures from history, sometimes I insert autobiographical details from my own life or people I know. Sometimes I just make shit up.

I adore analogues and stand-ins. I think in part because of growing up watching The Simpsons and recognizing the value in a character like Rainier Wolfcastle. Yes, he’s clearly modeled on Arnold Schwarzenegger, but since he’s only inspired by him and not meant to be him, it allows the writers to get creative. All of a sudden, instead of showing him starring in a movie called Commando (an Arnold classic), you have scenes from original Rainier Wolfcastle joints like McBain or McBain II: You Have the Right to Remain Dead or Help! My Son is A Nerd.

This is much more fun.

It also invites the creator to be, well, more creative. When you’re not married to the source material you’re free to be in an open relationship with anything you damn well please. And a lot of the time the source material really just serves as a starting point for what your story will end up being.

Alan Moore and Dave Gibbon’s Watchmen wouldn’t exist without the original proposal which featured the DC comics owned characters ( recently acquired at the time) from Charlton Comics. But DC was nervous letting Moore and Gibbons use the characters for such a dark, fatalistic story; so, they asked the creators to come up with original characters to use instead. Which meant Charlton characters like The Question became Watchmen’s Rorshach. Captain Atom became Doctor Manhattan. Even recent star of his own HBO series Peacemaker was replaced by Watchmen’s analogue version, The Comedian. And Watchmen as a work was all the better for it! Think about it, without The Comedian the whole dark joke motif of the book isn’t there. Hell, even his smiley face badge doesn’t exist as the series’ de facto symbol. 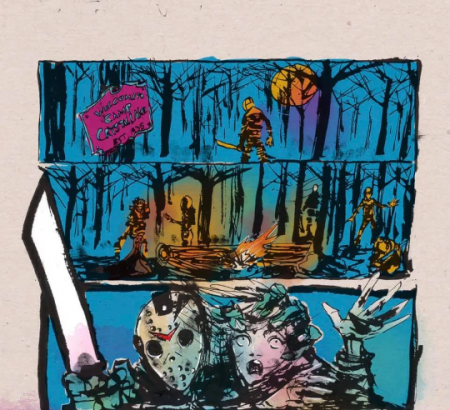 All of this makes it feel like I’m saying analogues are better than using the “real” characters.

But then you have something like Frank Miller’s The Dark Knight Returns, which uses Batman in a radical and novel new way. It builds off the established myth and then takes it somewhere new. And for this particular story, I think actually using Batman was the right call. Parts of the story would still work with a new character standing in for Bats, but so much of the story lands the way it does because we have an existing perception of him. We know his history.

“Everyone knows Jason goes to hell in the Final Friday, but what my new fan comic presupposes is, maybe he didn’t?”

I used this riff from The Royal Tenenbaums (uttered by Eli Cash, himself an analogue loosely based on Cormac McCarthy) to help explain to readers what my Friday the 13th comic was setting out to do. I use the words fan comic because what I’m doing is fan fiction and I have no problems with that label. Fan Fiction can be awesome. Much is well written and almost all of it comes from a place of passion. I can relate as I’ve never been accused of being the world’s most technically skilled author, but I do know I care deeply about all the stories I tell. Even the one about an 80s slasher movie icon that starred in 12 films without a single classic movie in the dozen.

Yeah, I said it. I love the series, but unlike Halloween, A Nightmare on Elm Street, The Texas Chainsaw Massacre or Hellraiser, there isn’t one entry in the F13 series that stands out as a horror classic.

No. What I’m saying is that most are merely okay or even pretty good but not great. And yes, some do suck. You don’t make 12 movies without dropping a few steamers. “It’s them damn enchiladas!” That line is a deep cut from Friday the 13th Part 5: A New Beginning, and folks who would know that are some of the people I wanted to reach with this series. The diehards. Of which I count myself. But I’m a diehard with some objectivity. Which is why I thought I was uniquely positioned to make this comic.

I can see the good and bad of the series, and my biggest take away is that despite not having one great movie in the entire series, there is still a consistency of quality, even if it’s not five star, and most importantly: there is a strong foundation to its mythos.

When I think of Friday the 13th, I’m often reminded of Bill’s Superman spiel from Kill Bill Vol 2.“Take my favorite superhero, Superman. Not a great comic book, not particularly well-drawn, but the mythology. The mythology is not only great, it’s unique.” 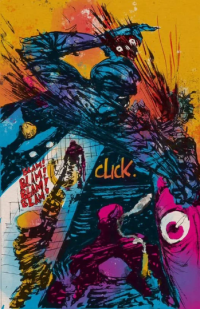 That’s Jason. That’s The Friday the 13th series. There is so much potential in there for someone to really go nuts with. And go nuts I did. I crafted a story that works best using the real Jason and his trappings. My idea was spurred on by my friend, comic creator, Clay McCormack. Besides writing and drawing comics, Clay hosts a great podcast called The Rotten Horror Picture Show, and during an episode he said something along the lines of, “Jason works best as a campfire story, a sort of tulpa.”

It was the lightning bolt to my coffin that I needed to start wrecking shit with this comic.

Now that the comic is finished (available to read free at my site or if you want a print copy I will send you a free one if you purchase an ink sketch from me for 10 bucks at my Etsy shop), I think the experiment was a great success for me creatively. I am likely to try it again with other existing properties, and I’m also reenergized to make some more analogues, too.

Having played with the genuine article, I started wondering what sort of story I could tell if I only used Jason Voorhees as a starting point? Of course, having made this comic and now written this piece I am reminded that making a bootleg Friday the 13th comic and planning on some sort of analogue story inspired by him is actually very much in keeping with the F13 tradition.

The original movie was a rip-off of the highly successful Halloween. They stole much of the feel and even the holiday (okay, Friday the 13th isn’t a holiday, but you know what I’m saying) centered name from John Carpenter’s movie. Even if he borrowed it from Black Christmas… In fact, the one thing they didn’t try to steal was the masked, silent killer at the heart of Halloween—Michael Myers.

Wait, that’s what they did eventually when they introduced Jason as the killer in Part 2.

“But Jason is totally different than Michael Myers…he wears a hockey mask,” you say. “Besides, there’s tons of movies which ripped off Friday the 13th and Halloween with more masked killers, there’s even a name for it; it’s called the slasher genre.”

Right. If enough people rip something off we call it a genre. But seriously, eventually, if enough people take ideas from something else and add some of their own, we get a whole new way of telling stories. And it’s the telling of the story which should always be the most important part in all this. As a creator I think it’s important to keep an open mind in deciding what’s best for your particular story. Is it using your influences to get somewhere fresh, or using a fresh take on your influences to get somewhere distinctly you? Is your story Watchmen or is it The Dark Knight Returns? And if it’s Dark Knight, and you can’t get the rights to the real thing; how bad do you want to tell that story?

Tony McMillen is the author of the novels Nefarious Twit and An Augmented Fourth.