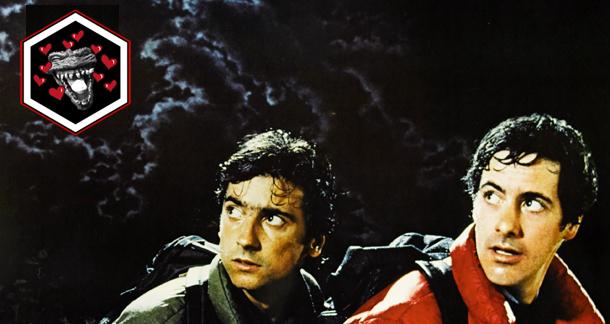 The decomposing murder victims are telling David to go kill himself as the woman on the screen is shouting for everybody to fuck her harder. It’s a wonderful example of horror mixing with humor. And that is my favorite type of horror. To me, comedy isn’t exactly a genre that stands by itself. It’s more of a spice that you sprinkle on top of other genres. And when you mix it with horror, you get one hell of a reaction.

So with that said, it makes sense that An American Werewolf in London is one of my favorite horror movies. It introduced me to humorous horror. Of course, that isn’t the only reason it makes my top ten list for best horror movies. It’s just a fantastic film. A great story with stunning visuals. But it also sparked my love for werewolves.

Werewolves! You know werewolves. Shapeshift into a wolf, howl at the full moon, turn your local city into an all-night buffet. Always hungry, always thirsty, eager to hump anything that moves. Hairy and smelling like trash. Typically found naked and confused during the day, covered in blood from the previous night’s festivities. Werewolves. Man’s best fiend.

Werewolves are all about releasing your inner animalistic urges. They're about no longer holding anything back and being the person/creature you’ve been hiding from society.

And before you say anything in the comments below, no, I will not apologize for that pun. So just sigh appropriately and move on.

Because werewolves, man, I love ‘em.

Their mythology is fascinating. Their various mythologies, I should say. Werewolves—or lycanthropes—are typically created from either being bitten by another werewolf or being placed under some kind of curse. There are other methods, of course, some lesser known than others. For instance, supposedly a person can “turn” by drinking rainwater from a werewolf’s footprint, which sounds like something Quentin Tarantino would incorporate if he ever happened to make a werewolf movie.

Back during the Middle Ages, it was believed that werewolves were demons or, in some cases, even Satan. One theory suggested that Satan would leave the person infected with the werewolf disease asleep behind a bush and, in the form of a wolf, go about town acting out the real evil hitherto hidden in the person’s mind.

Recent werewolf fiction, however, almost always involves lycanthropy being passed on from the family or—the more popular choice—by being transmitted from the bite of another werewolf.

Once he/she is turned into a werewolf, what then would the werewolf do? Not much, really, besides run wild and kill (usually farm animals, like sheep). You’ve seen the movies, you’ve read the books. Werewolves are all about releasing your inner animalistic urges. They're about no longer holding anything back and being the person/creature you’ve been hiding from society. Werewolves, in a sense, represent freedom while, at the same time, representing imprisonment. A werewolf is not given a choice, it’s trapped into acting out its innermost desires. Lycanthropy brings out the true animal in us all.

Werewolves in literature can be traced as far back as Greek mythology. The story of Zeus transforming Lycaon into a wolf is a classic. Early 19th century gothic horror stories were heavily influenced by werewolf folklore, which can be found in stuff like Wagner the Wehr-Wolf and The Wolf Leader. Hell, don’t let us forget Robert Louis Stevenson’s Strange Case of Dr Jekyll and Mr Hyde. Although a little different than most werewolf fiction, the story still shares many similarities.

With that said, it wasn’t until the 20th century that werewolf fiction really began to shine. This boom can be attributed to the rise of pulp magazines like Weird Tales. Thanks to Algernon Blackwood, we were bombarded with great werewolf stories. I would also be stoned if I did not at least give a nod to the greatness of The Werewolf of Paris.

The second half of the century continued with an increase in material. King wrote Cycle of the Werewolf. Gary Brander gave us The Howling, which of course went on to become one of the best werewolf movies in existence.

Onward into more recent years, we have some modern werewolf greats such as Those Across the River, Wolf Hunt, and Red Moon. And I’m pretty sure there’s some werewolves in the Twilight series, which we all know are brilliant books and should never be forgotten.

Werewolves are wonderful creatures with plenty of narrative potential, whether it be in film or in the written word, or whatever the hell. Shoot, they’ve even influenced some rather decent songs, from Warren Zevon’s “Werewolves of London” to Creedence Clearwater Revival’s “There’s a Bathroom on the Right”.

I’ve never written a werewolf book myself, but I know there’s a good one building up inside me. Much like the animalistic, flesh eating urges within us all, one day everything will come pouring out and the world will be a bit bloodier.

This just came out recently and I'd put it in the top 5 of werewolf movies. Maybe top 3.

Ginger Snaps is worth mentioning seeing as it features a female werewolf.

Also, love the rain water in a werewolf footprint myth!