Footnotes: The Bearable Lightness of the Extraterrestrial Being 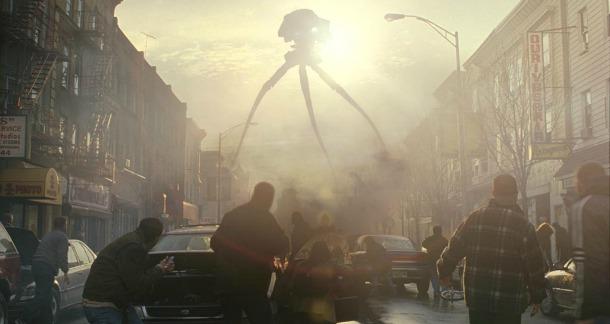 The idea of little green men absconding off into the cosmos with our physical body in tow formed right about now, as you were reading this, if we're looking at time according to Neil deGrasse Tyson's cosmic calendar.

That is to say: the idea of being abducted by cognizant beings from another planet or another dimension is still very new, even by our own ordinary yearly calendar.

Why is it, then, that a group of people have been celebrating such an occurrence for several years now? Why is a group of people collectively watching the sky every year on March 20, begging, hoping, pleading for some slick-dicked Martian to zoom down from obscure regions of outer space, load them into a flying saucer, and slide a phallic-shaped object into their anus, probably without proper lubrication?

I've thought about this for several weeks now, after first learning of the existence of Extraterrestrial Abduction Day. And while I can't speak for the folks who wish this sort of event upon themselves and their posteriors, I've come to this conclusion: Aliens have become the cool dude in school who everyone wants to bang.

How did we get to this point, though? How did we go from the utter paranoia, from the soul-clenching fear that the thought of no longer being alone in the universe instilled in us for a century — how did we go from that to being ready to end our lonely existence in and beyond our solar system and accept that we're no longer the only show in town?

The answer, of course, as it usually does, lies between the pages and in the imaginations of auteurs and regular human folk like you and me.

What I wouldn't give to have been alive and near a radio on October 30, 1938, and to have heard these words:

Ladies and gentlemen, we interrupt our program of dance music to bring you a special bulletin from the Intercontinental Radio News. At twenty minutes before eight, central time, Professor Farrell of the Mount Jennings Observatory, Chicago, Illinois, reports observing several explosions of incandescent gas, occurring at regular intervals on the planet Mars.

With that, Orson Welles and the Mercury Theatre took radio listeners on a fantastic science-fiction voyage, unintentionally blurring the lines between reality and fiction for the first time in popular culture with The War of the Worlds, a radio adaptation of H.G. Wells's 1898 novel of the same name.

Even if most everyone listening to The War of the Worlds radio drama wasn't fooled by Welles's attempted tomfoolery, the seeds of true paranoia had been planted.

Worlds is by most accounts the first major work in science fiction that features a conflict between humans and extraterrestrials, and Welles's radio interpretation is responsible for many of the popular conceptions society had about aliens from outer space — mostly, the fear that they were out to destroy our civilization.

The radio audience that October night in 1938 was mostly tuned into Edgar Bergen, a popular ventriloquist and the father of that chick on Murphy Brown. Bergen, part of the massively popular Chase and Sanborn Hour, routinely drew in the most listeners during this particular time slot. But after Bergen took his usual break ten minutes into the show, listeners surfed the dial. Some settled on CBS Radio, which was airing the music of Ramon Raquello and his orchestra live from New York.

Or so they thought.

An announcer interrupted the music, told the audience a huge flaming object fell from the sky and landed on a farm in New Jersey, and the rest, to be one of those hackneyed writers who uses cliches, is history, although it is a bit skewed. The mass hysteria that ensued during and after the radio show wasn't as massive and hysterical as we've been lead to believe.

Whether we were terrified of an alien invasion before that night isn't a consensus you'll find anywhere (believe me, I looked), but we've been waxing mythological about it since medieval times. And even if most everyone listening to The War of the Worlds radio drama wasn't fooled by Welles's attempted tomfoolery, the seeds of true paranoia had been planted.

Almost nine years later, those seeds sprouted up like a giant beanstalk.

Having grown up in and around the Dayton, Ohio area, I can tell you the stories are told more often now in the age of the Internet and social media. Popular belief was that whatever was recovered from Roswell, New Mexico in the summer of 1947 was an alien spacecraft of some sort, and whatever was recovered was transported to Area 51 in southern Nevada. But ask anyone around these parts, and you'll hear different: Wright Patterson Air Force Base, Hangar 18 — that's where the goodies are. Or maybe it's Hangar 4.

(Either way, we're harboring seventy-year-old alien bodies and reverse engineering shit right here in the Gem City, kay? Fact. Internet said so. Let's get this train back on the track saucer back in the sky.)

Perhaps the most discussed event in the 20th century — at least on the History Channel — the Roswell crash has captivated the imagination of the American population since that sizzling summer day seventy years ago. The United States Air Force was quick to refute the front page story that ran in the Roswell Daily Record, and said what was recovered at the crash site was some bullshit high-altitude weather balloon. But America, and by extension its arts, wanted to believe otherwise.

In literature in particular, the Roswell crash put an exclamation point on the Golden Age of Science Fiction and its space operas and spirituality, but it set the stage for a transitional work that would fundamentally change the way we looked at life from other planets — and, ultimately, our own existence.

On June 1, 1961, Robert A. Heinlein released what may be the best and most famous science fiction novel in the history of the genre.

Stranger in a Strange Land was bashed by critics when it was published, but 51 years later, the Library of Congress named it one of eighty-eight books that shaped America, so what the fuck did Orville Prescott really know?

What I like most about Stranger is how Heinlein uses the main character — Valentine Michael Smith, the kid raised by Martians — to comment on society's general narrow-mindedness on things like consumerism, religion, and the many fears we had as a population. Of course, the entire book acts as commentary on how we viewed the possibility of life on other planets and how it may have viewed us, and that, combined with the book's other commentary, is one reason it helped shape America into the country it is today, for better or worse.

But Heinlein knew our logic needed to evolve, that we needed to view the world and ourselves differently. He told us we needed to change. And we listened. No longer was it the opinion of the masses, for example, that alien life existed only to destroy human civilization. If Heinlein and Smith taught us anything, it was that those little green men were eerily similar to us, that we shouldn't fear them at all. No longer were we afraid to be alone in the universe, which grew vaster and vaster, deeper, more complex, evolving and expanding, much like us.

Perhaps that's why this group of people collectively watch the sky every year on March 20, begging, hoping, pleading for some slick-dicked Martian to zoom down from obscure regions of outer space, load them into a flying saucer, and slide a phallic-shaped object into their anus. And if Heinlein and Smith are to be believed, they'll be gentle, which means proper lubrication.

Hahaha this was terrible and amusing. The last line especially!