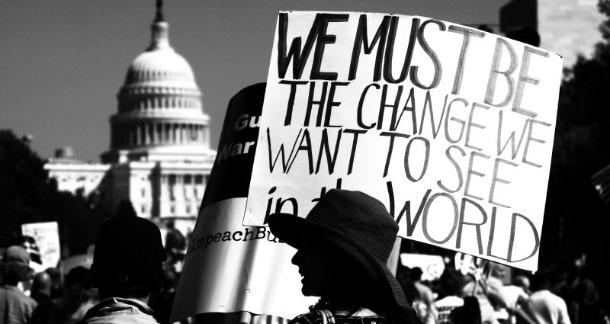 You can credit Catch-22 for signs and scenes like this. Photo courtesy Nestor Lacle.

Footnotes is a look at how specific novels were shaped by the culture of their time, and how those novels shaped the culture.

I can’t claim to know if anything like this has happened at any other moment in literary time, but when a book released 52 years before, say, a column like this, when that book is still responsible for the way we think and feel about certain moral and political issues – well, that’s some book.

Catch-22 is, by all conceivable and inconceivable definitions, some book then. Its place in American Literature has been documented ad nauseam and need not be disputed. But Catch-22 has been as impactful on American History as any dive-bombing sneak attack. It has a history in the U.S. as rich as anything noted historian Stephen Ambrose put his name on. To put it another way, and in virtually the same words: As great a place as Catch-22 holds in American Literature, it holds an equally great place in the annals of American History. Joseph Heller would have enjoyed that repetitive description. He also would have been pleased by it.

When Catch-22 was published in 1961, the Vietnam War was eight years old, but U.S. involvement was only just beginning. The timing could not have been more perfect for Heller, a 38-year-old rookie author whose wartime experiences as a World War II bombardier may or may not have inspired the satirical struggles of Catch-22’s main character, a cantankerous contrarian named John Yossarian.

The timing was also perfect for America, a country who dealt with the end of the Second World War and the beginning of the Korean War in just a five-year span in the late 1940s and early 1950s. Although the initial critical and commercial response to the book was largely mixed and underwhelming – odd, considering Simon & Schuster’s badass marketing campaign – when it hit shelves in paperback in 1962, America collectively lost its shit.

It was as if Heller was not only writing a novel, but a Nostradamian prophecy.

Shit-losing is an everyday occurrence in the Twitter Age, but it was a nonexistent occurrence pre-Catch-22. Not that I'm going to credit Heller and his novel for giving rise to the act of losing one's shit – or another new hyphenated word – but one could easily see how a precedent was set.

The book's tone is best described in simple terms: cynical, man. That tone aligned perfectly with the evolution of thought that maturing teenagers and entry level professionals were undergoing in a country rapidly changing both morally and politically. The glowing optimism that came out of World War II was slowly deteriorating into the cynical rationality that Catch-22 – and Vietnam – later became known for.

Catch-22 was largely ignored by the general public upon its hardcover release, but the more price-conscious twenty-somethings – those Baby Boomers we’ve heard so much about – not only drove paperback sales skyward, but helped thrust the message of the book into mainstream popular culture. The opposition of American youth – and later, Americans of seemingly any and all ages – to the country’s participation in Vietnam had a lot to do with that 180-degree reaction to the book, and the book had a lot to do with the youth’s reaction to Vietnam.

It was as if Heller was not only writing a novel, but a Nostradamian prophecy. In Catch-22, authority figures are arrogant, moronic, ignorant halfwits; militant organizations are farmers who recruit sheep under the misleading, misguiding ideal that their farm is better than all other farms and they’re going to liberate the sheep on those farms, only to send their recruits to those farms to be slaughtered; and those misleading, misguiding ideals of militant organizations are nothing more than empty, Machiavellian hyperbole.

That’s how Baby Boomers were beginning to see things. The world was not as it appeared. They saw through the bullshit. This was far before the Internet, far before the dot-com bubble, far before the Information Age. There wasn’t any alternative media. There wasn’t a blog dedicated to government conspiracy theories written by your sketchy skeptic of a co-worker. Information was not available at the press of a button or the click of a mouse. But people were fed up, young people, especially. And when young people are fed up, other people bear the brunt of their frustration. The discontent of an American youth always finds an eye or an ear.

That’s how Yossarian saw the world, too – right through it. Everything was clear, which was to say everything was shrouded in shadows, secrecy and ulterior motives. That the darkness masqueraded as light was never the issue to him, though. The issue was an absence of purpose. The issue was not having a good enough answer to that millennia old question: Why?

In Catch-22, Yossarian has no mission other than to stay alive. That personal mission supersedes any mission given to him by Colonel Cathcart, his commanding officer whose own personal mission is to become a general by whatever means necessary. These means include the constant source of conflict for Yossarian: Cathcart’s habitual raising of the number of missions bombardiers must fly before they can go home. Even though the Twenty-seventh Air Force Squadron requires only forty such missions, Cathcart raises it whenever he desires, to forty-five, fifty, fifty-five, sixty, sixty-five, all to impress his commanding officer, Gen. Dreedle, and earn a promotion.

By the end of the novel, Yossarian has lost most of his friends to the war, except for Orr, his tent mate, who somehow managed to escape to Sweden. Yossarian decides to desert his post and join his good friend. “You’ll always be alone. No one will ever be on your side, and you’ll always live in danger of betrayal,” says Major Danby, one of Yossarian’s few confidants, desperately trying to talk him out of desertion. “I live that way now,” Yossarian says nonchalantly in response.

And so was born the ethos of the countercultural movement that followed Catch-22's American publication. People were unhappy, and desertion of one's leadership – the government and their selfish, irresponsible decision-making; the corporate world and its endless parade of ass kissers – seemed the only way to voice their displeasure for not only the Vietnam War but life as they knew it. Never mind that this ethos may lead them to dark places and imperfect ways of life. They were already there, already living that way, as Yossarian said, so what the hell?

It’s this corporate bureaucracy that Yossarian and his fellow soldiers are constantly fighting against, and it’s this struggle that was most identifiable to those young readers. In their eyes – and Yossarian’s – corruption exists at every level above them and no one can be trusted. The only way to fight it is to stay alive. But even then, you’re still alive. It was as if the only good officer was a dead officer, Yossarian muses, because they didn’t have to deal with the bullshit anymore.

America’s War on Everything Not American is never-ending. The country was involved in both hot and cold wars continuously from late 1941 to late 1991, and has set a similar course since 9/11. Maybe this is why the absurd shadow Catch-22 casts is as inviting to readers today as it was a half century ago. Maybe this is why those blogs dedicated to government conspiracy theories are so abundant. Maybe this is why people have occupied Wall Street or wear Guy Fawkes masks and organize DDoS attacks in the name of justice.

Maybe it was Catch-22 that started all of this.

And maybe it wasn’t.

Who am I kidding, though? Of course this has happened before in literary time. Of course there are other texts that have affected us both morally and politically since its publication and for as long, or longer, than Catch-22. Yes, I’m sure it has happened. I’m positive.

But if we can’t come back at any moment in the future and talk about some books together in this space, at least we talked about the one that has the biggest footnote in American history.

Unless, of course, it doesn’t.

Joseph Heller said that the book was NOT inspired by his expirences in the war.

True, but an author's opinions of his work and how the public interprets it are totally seperate from each other. An artist's word is not gospel.