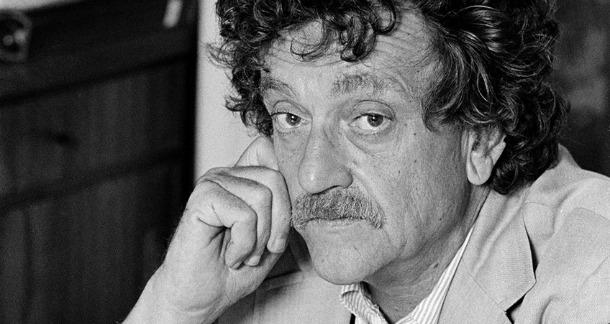 I live ninety miles from Indianapolis, Indiana, the birthplace of Kurt Vonnegut and the capital of Midwestern mundanity, although I've long maintained this part of the country is more Mideast than Midwest. I suppose that's neither here nor there, and you probably don't care either way, unless you also live around these parts, in which case I'm the one who doesn't care.

I bring this up for no particular reason other than this: I visit Indy — as it's affectionately called here, there, and everywhere — often, and by often I mean once every four months to hop a plane to Los Angeles, or catch a concert from some national touring act like The Black Keys or Nine Inch Nails or the Biebs.

Regardless, every time I breach the Indianapolis city limits, I'm reminded of Kurt Vonnegut, the late author who penned such literary classics as Slaughterhouse-Five and Cat's Cradle, and whose "So it goes" catchphrase I've stolen many times and passed off as my own to audiences of varying sorts.

Vonnegut is also the guy who once compared semicolons to transvestite hermaphrodites in what has to be the best quote related to punctuation in the history of quotes related to punctuation. "Here is a lesson in creative writing," Vonnegut said. "First rule: Do not use semicolons. They are transvestite hermaphrodites representing absolutely nothing. All they do is show you've been to college."

He's still exactly what I've always wanted to be: a sneaky, snarky, brilliant thinker who just so happened to turn his thoughts into words and share them with the world.

If you're a writer in your own right, or a fan of Vonnegut, you've probably seen that quote, which appears in his 2005 collection of essays A Man Without a Country. If you haven't, your initial reaction will undoubtedly be shock, followed by an insatiable urge to go back through every draft of fiction or nonfiction you've ever written and remove each and every one of those disgusting punctuation marks, those bastard semicolons that are merely a pretentious way to bridge from one thought to another, and then you'll drink yourself into a Hemingway-esque stupor and wonder why the semicolon never bothered you this much before.

Or maybe that was just my reaction.

In fairness, I first saw this quote as a young undergrad. I was majoring in creative writing and just starting to take the craft seriously. I was taking daily doses of Vonnegut, prescribed to me by both professors and peers. Hell, I got so into Vonnegut that I bought one of those eight-dollar posters you find at poster sales on campus that makes you think you're hip because it says something snarky and cynical and symbolizes what you think will always be your view of the world around you. (You know, the type of poster with a picture of some counterculture icon's old, wrinkled, I-just-ate-shit face and one of their whimsical, pacifist sayings underneath it, Vonnegut's something to the effect of "How embarrassing to be human" or some other such thing.)

I wouldn't call Vonnegut my favorite writer (Mark Twain takes that title), but he holds a permanent spot in my top five. So, as you might expect, any advice from him or his ilk is similar to Moses descending from Mount Sinai. It's full-fledged gospel.

Needless to say, the semicolon became my sworn enemy from then on, the Lex Luthor of my writing. Not only did I remove all of them from previous writings, surely turning average stories into near-Pulitzer Prize winners, I also avoided them like the plague every time I drafted something new, careful to use even a full, regular colon because it was the same key and I didn't want to accidentally place one of those troglodytic, half-bred punctuation marks into a space where a period or comma would do just as well.

Yes, I was well on my way to becoming a seasoned writer who wrote just like the big boys. I was writing like Kurt Vonnegut — Kurt effin' Vonnegut — and nothing could stop me. I was Vonnegut's transvestite hermaphroditic son, if you'll indulge one of my college-aged fantasies. I had rid myself of every damn hurdle that would ever stand in my way. I had not one damn semicolon in any of my writings, not one! Who or what would ever stop me from claiming a Pulitzer Price for Fiction? Who or what, I say!

Kurt Vonnegut would have been 91 on Monday. I remember the day he died, a gloomy spring day in 2007, I posted "So it goes..." on my Facebook page and then brainstormed a column devoted to his memory, to be published in the newspaper I was working for at the time. It was a fitting homage to his wit and style, and I still consider it one of the best pieces of writing I've done.

But my love for Vonnegut has waned a bit since his death. It wasn't him; it was me. I've matured as a reader and writer and my tastes have evolved. That's not to say I still don't admire his bibliography, because I do. And he's still exactly what I've always wanted to be: a sneaky, snarky, brilliant thinker who just so happened to turn his thoughts into words and share them with the world.

But he duped me, like he did many others. I didn't learn until years later that Vonnegut's quote about the semicolon was tongue-in-cheek. Or, another way of saying it, a bold-faced lie. And that hurt, cut me deep. It probably cost me several writing awards on the international level.

When people share that quote in person or online, it's almost always out of context (I'm guilty of this from 2005-2010, misleading countless established and prospective writers). Never do they share the sentence that comes after it ("And I realize some of you may be having trouble deciding whether I am kidding or not. So from now on I will tell you when I'm kidding"), nor do they mention that later in A Man Without a Country he uses a semicolon and says that "rules only take us so far, even good rules."

And, you know what, he's right. Writing has no rules, at least that's what I think he was alluding to. For all I know he could be referring to the world at large, and knowing his non-writing interests, I wouldn't be surprised.

I wouldn't say I've completely embraced the semicolon, but I do think it has a time and place. Sometimes you need something stronger than a comma and weaker than a period, and something that shows your reader there's a related nugget ahead that doesn't warrant a full stop because its relation to the previous thought is more sibling than cousin.

The semicolon may still look like a pretentious fuck, but even pretentious fucks have feelings. I learned this in college, one of the many valuable lessons I paid thousands of dollars for that took place nowhere near a classroom. That lesson, coupled with Vonnegut's ability to use his intellect and sarcasm to his advantage — which has surely rubbed off on me as both a writer and human — has gone a long way in shaping the words (and punctuation marks) that roll off my fingertips and into this text, and it has done the same for many of you out there reading this.

But, as it turns out, these lessons have not yet helped me win a Pulitzer Prize for Fiction. So it goes.

Love this article.  I've taken many lessons to their extreme before now (the semi-colon example being one) simply because they've come from a writer I admire.  The true lesson came when I learned to break these rules without losing sight of how they raised my awareness of the prose. I still consider many of the "rules" valuable because they force me to write, rewrite and reconstruct what I've written. The end result may well be that I choose to disregard the "rules" because that is what is best for that particular piece.  But at least I will have arrived at that conclusion through a knowing process that hopefully puts a bit of a muzzle on my constantly barking out poor writing techniques.

Completely agree with you, Scott. That was the reasoning behind the column, even if it wasn't all spelled out.

Awesome article. I have a habit of using semi colons on the regular, not realizing whatsoever that they were ever considered pretentious. So when I started this article (being a fan of Vonnegut) I said to myself "Well, that's that for semicolons, I suppose." Then I kept reading and was all "Sweet, I can keep on semicoloning!" but now that I've fiinished the piece I realize that semicolons, much like illicit substances and no-strings-attached intercourse, are better in moderation.

As a writer, If I've learned anything from reading Vonnegut it's this: Write the way you want to write; with your own voice, style and substance. Therefore nobody, not even him, can tell me not to use a semicolon; they are part of my literary arsenal. In fact, I'll even use a semicolon when a comma would suffice or a period would be more appropriate (as I've demonstrated in this comment).

Great article.  And I agree with Kimberly.

"It wasn't him; it was me."  Excellent and hilarious use of the semi colon in your article!

I'm more afraid of the apostrophe. I've been told they're confusing

Simone Bellenoit from Massachusetts is reading Bone In The Throat November 19, 2013 - 9:53pm

Semi-colons are great for pissing other writers off.

I love what you've said here. I have this thing about wanting to impress famous writers who will never read my stuff. They sit around my writing desk with their sayings and methods, vying for attention and influence over what I write.  It can be a bit maddening. My writing only starts flowing when I silence them and get cozy in my own skin and my own voice.

I'd have to dig, Michelle.