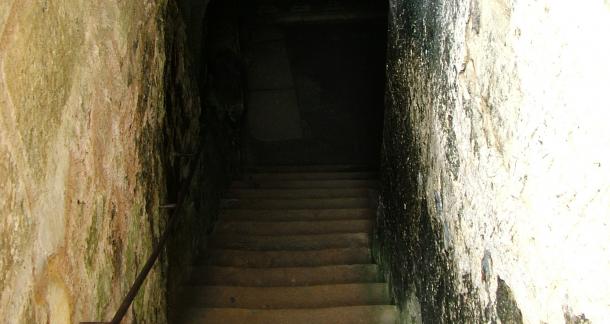 Clichés and tropes abound in horror movies. No matter what film you go to see on Halloween night, it always seems like something predictable happens at least once: the blonde girl trips while running from the serial killer; the car doesn’t start at the worst possible moment; a group of victims brainstorm the brilliant idea to split up. There are whole lists of faux pas our favorite movies make, even if we enjoy screaming right along with the characters while they’re being committed.

But what about those common plot scenarios that occur in horror literature? The overuse of tropes in books can be more complex and harder to identify at first. Oftentimes they don’t appear as a simple warning that a character ignores, or a scary sound someone rashly goes off to investigate. Some of them, even though overdone, actually enhance a story rather than hinder it. Still, the hijinks a horror character may get themselves into can seem pretty unrealistic at times, even if it makes for a satisfying twist in the narrative.

Here we examine five common situations horror characters in literature often come across, and how the IRL version would go down. Warning: Spoilers may appear.

1) That asshole character that did something really mean gets his comeuppance.

Ahh, karma: that mystical force one hopes to summon every time someone does you wrong. That guy who cuts you in the coffee shop line? May he be given decaf! That jerk who steals your taxi at the airport? An exorbitant fare for you, good sir! At least, that’s how we all wish life would go. It isn’t often that people actually get what’s coming to them—unless you’re a fictional character in horror literature, that is.

Karmic retribution always gives us the best feels when we need them most, especially in horror literature.

Just about every horror fan has read a book where a terrible character meets an even more terrible fate. In books, that guy who cut you in the coffee line is axe-murdered, and that taxi-stealing jerk is disemboweled. Take Stephen King’s Misery, for example. Annie Wilkes, a killer fan who abducts her favorite writer and subjects him to an array of torturous acts, is choked with pages she believes to be the very novel she kidnapped him to write for her. In The Girl from the Well by Rin Chupeco, a child rapist and murderer kidnaps one of the main characters, only to set loose a vengeful spirit who tears him into pieces. And finally, in one of the most trope-filled series I’ve ever heard of, The Dresden Files, an antagonist named Victor Sells is attacked by the same demonic forces he invoked to kill the main character in Storm Front.

In real life, we wouldn’t be so lucky. Chances are Annie Wilkes would’ve gotten away with murder, and Chupeco’s Turk would be scarred for life or end up dead. I like to pretend Harry Dresden would still come out the champion, though—because let’s face it, he’s pretty badass—but I don’t have high hopes. Still, karmic retribution always gives us the best feels when we need them most, especially in horror literature.

2) Some idiot decides to piss off the most powerful character in the book.

Every time I come across this one, I can’t help but cringe. Often used to evoke sympathy for a villain, the tactic never ends well for the supporting cast. Ripping another example straight from Stephen King’s repertoire, Carrie features a mother who ruthlessly abuses her daughter even though she knows Carrie has the power to kill her using only her mind. While Carrie is mercilessly teased by her peers throughout the story, at least they’re perpetrating the abuse out of woeful ignorance; Margaret, on the other hand, is basically poking an angry bear with a big stick. That said, King wields this trope with excellency, and the book wouldn’t be the same without it.

For any situations that arise in real life, people, let it be known: general practice dictates that you should avoid teasing serial killers. The average human being is usually smart enough to acknowledge this as common sense, but it’s best I make that point clear just in case.

3) Someone decides to head down to the basement.

The word "basement" is a red flag in horror literature. When I come across it in a book, I usually make sure I read the rest of the chapter in a well-lit room with all the doors and windows locked. Nothing good ever happens in a cellar. EVER.

My favorite example of this can be found in Neil Gaiman’s Coraline. I don’t know how scary this book is to kids (I’ve heard it’s more terrifying for adults), but as soon as she goes into the basement, you know you’re in for an unpleasant surprise. There she finds the Other Father, who dutifully tries to murder her. The Road by Cormac McCarthy also features a horrifying basement sequence where the protagonists come across a cannibalistic butcher shop while they’re foraging for food. And don’t get me started on Madeleine Roux’s Asylum, in which the entirety of the plot is centered on a forgotten, underground chamber in a mental-institution-turned-prep-school-dorm. It’s true that including a basement scene in a horror novel is a sure way to get a good scare out of the reader, but the problem lies in the fact that we will always know what’s coming as soon as the character takes his or her first step down those creaky, cobweb-covered stairs.

So how do basements go on an everyday basis? Pretty much the same, actually, which is why I don’t even have one. Basements are scary as fuck, even in real life. I wouldn’t be surprised if every serial killer or psychopath had a secret cellar where they kept their victims locked away—which actually happened in Austria once, so yeah:

4) A skeptic refuses to believe in the supernatural threat.

General practice dictates that you should avoid teasing serial killers. The average human being is usually smart enough to acknowledge this as common sense.

If you ever have the occasion to become a character of horror literature and somehow find yourself trapped within the pages of a book, please remember to keep an open mind. Not doing so could result in a horrible death, just like Eddie Corcoran in the iconic novel It—the third and final King reference I’ll make here. The child Eddie refuses to believe the monster is real, and still insists it’s a person in costume—even going as far as to search for the monster’s zipper—up until the moment he is killed.

The “nonbeliever” is a common character in supernatural horror, as well as in other genres of fantasy literature, and I often feel they are inserted just to be the Scully to a book’s Mulder. By denying the very evil that runs rampant throughout the plot, it sometimes becomes all too easy for the reader to discern what lurks in the darkness: ghosts versus a more human-based threat. The more a character denies the supernatural, the more the reader believes the contrary, and vice versa. However, if done well, this trope can actually help create a multi-faceted narrative, as was done in A Head Full of Ghosts by Paul Tremblay. With a cast full of doubters, believers, and skeptics—even in the face of overwhelming evidence as told by an unreliable narrator—the reader can never quite put a finger on whether the external evil is corporeal or otherworldly.

In real life most threats, just like characters, are very similar to those found in Tremblay’s novel: grayer in nature rather than clearly black or white. Most of us are both Scully and Mulder at the same time, believing in some myths but choosing to discount others. I’m not usually one to see ghosts where there are only white sheets, but if I ever stumble upon a monster in the darkness, I’m sure as hell not going to question what I’m seeing—and you damn well better believe I’m going to run.

5) A character is told of his or her fate, only to miss the point entirely.

You know this plot theme well, I bet. The main protagonist is given a very cryptic message by the antagonist, only to misinterpret said clue entirely, no matter how obvious it seems to the reader. The result usually leads the character to a terrible fate. This is a classic scenario best illustrated by Mary Shelley’s Frankenstein. The infamous monster, distraught over Victor Frankenstein destroying his mate, tells Victor he’ll be with him on his wedding night. Victor assumes what he thinks is the worst—that the monster means to kill him on the night in question—and thus waits outside his honeymoon retreat with a shotgun for defense. In the end he discovers a fate worse than his own demise; while he was waiting outside, the monster was inside murdering his bride, just as Victor killed his. In theory, a veiled clue can provide excellent foreshadowing, but it’s a balance of phrasing. Be too obvious, and the reader guesses the true intent before the character does; be too vague, and you just confuse the hell out of everyone.

In everyday practice, however, this concept doesn’t hold up to testing. Victor would probably still load his shotgun, but he’d also give his bride a pistol just to be safe. A vague threat typically leads one to overly cautious behavior.

Are there any overused scenarios you’ve found in horror literature, or more examples of those listed above? If so, comment below and share your input on the tropes and clichés found in any spine-tingling books you may have read!

Dwayne from Cincinnati, Ohio (suburbs) is reading books that rotate to often to keep this updated October 12, 2015 - 7:51pm

The power of love/lust is stronger - X is not possible, because SCIENCE, but twue luv over comes not just the odds but the laws of physics.