Finding Success When Your Back is Against The Wall 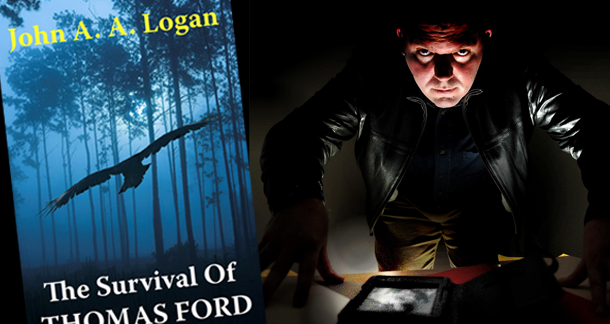 The struggle with traditional publishing

You've probably never heard of Scottish author John A. A. Logan. It’s hardly a surprise in this age of new writers appearing every millisecond. Like a lot of people, Logan tried the usual routes to get published and had limited success. What was worse, was the old “I like it, but I don’t think I can sell it” response he got from people in the industry. I don’t know about you, but that’s got to be one of the most frustrating things about traditional publishing.

Logan had a number of his short stories published in magazines and anthologies, often with big names and big name editors. He even self-published a book, which will remain nameless, probably selling under one hundred copies in person and through local bookshops. But he hit the wall with his fifth book, The Survival of Thomas Ford. His agent in London thought it was brilliant (but can you change a bit here… a bit there…). Nothing happened. Lots of excited noises and positive thoughts, but no deal.

Then, in 2011, Logan happened to meet up with an old friend outside a cafe on a sunny day in Inverness (an event that is pretty rare in the northern Highlands of Scotland) who’d recently been talking to his sister. “Ebooks… My sister’s in publishing. She says the future is eBooks.”

And that’s where it all began. For Logan, the biggest challenge he faced was deciding to take the plunge and get off the “agent/publisher/submissions/rejections” rollercoaster.

As 2011 ground on, I could feel the purpose draining out of the “mission”... you get that unmistakable sense of it being a dead end you’re headed for! So near the end of 2011 instinct told me it was time to jump ship from that traditional agent/publisher model that I’d invested over a decade in by then. That was probably the biggest challenge: choosing the moment to shift from agent/publisher/submissions/rejections, and take The Survival of Thomas Ford back into my own hands. Scary, as it had taken me 21 years to get a London literary agent. It also had the full support of the agency’s film consultant, who’d discovered Slumdog Millionaire as an unpublished manuscript, and thought Thomas Ford was the best book she had read in the last 4 years! But no matter how strong the representation, over a year had passed without a UK publisher buying the book, so it was an obvious thing to do — put this book up myself on Amazon Kindle. That was probably the biggest challenge: spotting the necessity to do it at just that time.

After the encounter with his friend, Logan thought about what he’d said. He did some research, genned up on the technicalities of publishing an eBook, and with a deep breath, pushed the publish button for The Survival of Thomas Ford on Christmas Day, 2011.

It’s very painful to go 23 years without the Voice of book publication, as I did... But then again, it tests how serious you are and gives you a LOT of time to spend working on an art for its own sake.

Success wasn’t immediate, but after all the years of waiting, it must have felt pretty quick. By April 2012, Logan was on Amazon’s bestseller list, reaching number 18. Granted, he’d done a free download offer and gave away 17,500 copies when that still counted towards the figures, but that was followed by £1,000 worth of international sales in the following seven days.

After dabbling on various sites and starting to use social media, Logan got involved with a couple of writer’s collectives and after a blog post about how he did it, even got asked to go to the London Book Fair to speak at the launch of the Alliance of Independent Authors by its founder, Orna Ross. Logan made the 600-mile trip to London (that’s a long way in Britain) just to talk about “How I Went Indie and Why”. It was the first time in over a decade that he’d met other writers or been to a literary event.

The experience was exhilarating for a writer from the north of Scotland.

The leap may have been scary, and probably one of the hardest decisions Logan ever had to make, particularly in light of the scorn poured over the whole indie movement by “real authors”. But it paid off. Logan’s talked a few times about authors who never saw their masterpieces published, people like John Kennedy Toole and Mikhail Bulgakov, and the need for something like the eBook revolution to occur to get the lost voices out in the public eye. For him, publishing an eBook freed his words and allowed him to reach people who may have never seen a physical copy of the book.

The Survival of Thomas Ford began to get critical reviews, some in the press, but more importantly, in the reader’s world — and people started talking about it. As Logan found out, the best free publicity is word of mouth. Well, that and a good position on Amazon’s charts doesn’t hurt, either. He’s even been compared to a young Ian Rankin (the Rebus books), one article even going so far as to suggest Rankin move over for the younger generation of authors.

The result of all this attention was that Logan’s books sold and continue to sell. How? By getting them out into the public eye. By giving them away.

One thing I’ve noticed is that there are reports every year in the writing community of the difficulties, or of things that have ceased to work. For instance, free promotions were deemed not to work, or to be a bad thing, for over a year while I was still getting regular results from them, i.e. going into up to $2000 profit from free promotions, a year after the accepted wisdom was that they could no longer generate any profit at all. So, if I had listened to, or believed, the reports that free promos no longer worked, in 2013 say, I would have lost quite a lot of income, and a great many readers. On the other hand, things do change, methods that worked in 2012 did not always work by 2013. I haven’t given away any free books for quite a while now, but if I really felt it was getting hard to keep books visible, I would go back to free promos, it is a great method for getting work out to people in large numbers and finding readers. People do read free books, despite rumours that they don’t — I had 100 new Amazon reviews once, following a couple of free promos!

Logan has since published a collection of short stories, Storm Damage, and a thriller set in the Highlands inspired by his mother, Agency Woman, and plans to publish other novels he’s finished over the last 20-odd years.

After an exchange of emails with Logan, he gave me his thoughts for writers thinking about publishing their own work.

I think everyone’s case is different, and everyone has to use their own instinct about what to do in their unique situation. But, perhaps don’t spend quite as long as I did banging on the trad pub Gates and not being allowed through — there’s no need now to put up with over 10 years of that! On the other hand, though, in 10 or 20 years, quite a lot of books can be written, quite a lot of time spent on the art and craft of writing — as without publication that is all there is in it for the author, what John Gardner called “A Way” or a “Yoga of writing”. I don’t regret the writing I did in the last 25 years, which mostly went unpublished until recently. I can even see that, if I had been published traditionally, I would have never had the time to concentrate in-depth on writing purely as writing, for its own sake, for the love of it. It’s very painful to go 23 years without the Voice of book publication, as I did, that is the destructive side of the situation. But then again, it tests how serious you are and gives you a LOT of time to spend working on an art for its own sake.

But better not to wait 23 years before hitting that self-publish button, definitely, now that there is a choice!

As for how to go about self-publishing, the most important thing is to do it your own way and stay positive, ignore the Chicken Little stories about the sky being about to Fall Down which appear every 6 weeks! There’s a great free online document available also, though, called “Ruth Francisco’s Kindle Primer”. It got me through the first few months and the info/advice still stands up today...

I found free Kindle promotions, and a low 99 cent price, worked very well at the start, too, as a way to reach new readers, which was my priority.”

Will everyone be able to use this route to get some form of success for their novel? Probably not. If everyone did it, everyone would be in the top ten and that’s just not possible. That said, I think Logan’s story is another reiteration of the best advice I keep hearing from successful writers: write the best book you can.

And I think Logan would add: don’t be afraid to do it yourself.

Meh. Old news. An author who succeeded using an Amazon algorithm that doesn't exisit anymore. Write about a breakout newer than than three years ago...

I really like the "art for its own sake" bent. In an era where James Patterson doesn't even write his own books, indie/self-publishing seems more and more like the only true "art" out there for the literary world.

Where do essay writing services get their essays? Although many of these companies would like you to believe that they are creating essays with a qualified team of writers, most of these so-called find essay writer online actually outsource their writing to India and other countries.