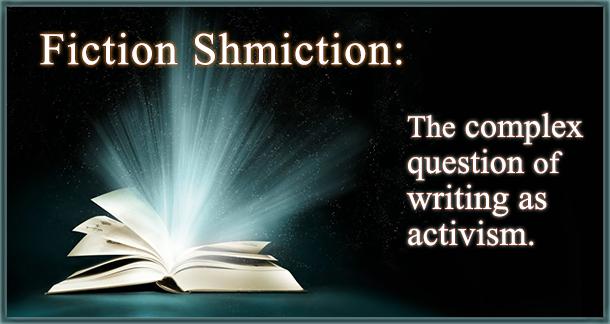 Over a year ago, I explored a topic that is central to the way I think about stories and the role of writers. In short, I believe that stories create the world we live in by shaping the beliefs and assumptions we hold about the "way things work," and that this in turn changes our behavior in dramatic ways. What's more, I showcased the scientific backing for these beliefs by exploring the numerous studies that have demonstrated the ways our beliefs influence our actions.

And in all of this exploration, I have left one major question unanswered: If writing shapes the world around us, should we view all written work as a form of activism? How can we write in ways that change the world for the better? And should we?

It's a tough issue, and one that I don't have a complete answer to, but I wanted to use this space to unpackage the question—and hopefully open a dialogue on the way you think through this dilemma.

I think one of the most compelling arguments against treating writing as activism is that art should represent the world around us accurately rather than in an idealized way. One proponent of this view was Anton Chekhov who famously said:

One has to write what one sees, what one feels, truthfully, sincerely. I am often asked what it was that I was wanting to say in this or that story. To these questions I never have any answer. There is nothing I want to say. My concern is to write, not to teach!

In other words, writing should be a truthful reflection of the world, and that literature then serves as a mirror held up to society, not to give answers but to ask questions. For me, however, this argument breaks down when we recognize what a poor job our various fictional mediums do of portraying the world accurately.

Despite this insistence that we are (at least attempting to) show the world as it is, the primary characters in our stories have a strong tendency toward being white, straight men. Some other groups get decent representation (we see a fair number of white, straight female protagonists), while many are left with almost no representation at all. So perhaps representation can be both a function of art and a form of activism.

There are many ways in which these forms of activism are superior to thoughtless reproduction of our existing (and inaccurate) cultural assumptions.

Mike Rugnetta does an excellent job of describing our failures of representation when he discusses the new Ms. Marvel (Kamala Khan). The full video is worth watching, but I feel Mike's conclusion is especially relevant. In that conclusion, he notes that the dominant representation of white, male central characters is "bad because it portrays a world that doesn't exist, and in so doing suggests that the actual world isn't the way that it actually is."

Rugnetta further argues that the problems of accurate representation can't be countered simply by indicating that fiction should be able to take liberties, because while we are taught the distinction between fictional abilities and situations, no such lessons exist that teach us that the interpersonal relationships, dynamics, categorizations, and stereotypes we are witnessing are equally unreal.

If we can portray the world accurately and complexly, and in a way that reflects the world as it is rather than as we assume it to be, that alone can be a powerful way of changing the world for the better.

The Presentation of Idealizations

So let's say you agree with me that truthful representation can, in and of itself, be positive. For me, the picture doesn't end there, because I don't believe the world is perfect, nor do I think that broader representation is enough to rid the world of all its injustices. So what more can be done? Is it possible to use art as a way to portray the world in a way that helps us move toward a better world?

For me, Buffy the Vampire Slayer provides a fairly good example of a productive idealization. To have a blond, cheerleader character who also happens to be destined to save the world and who is a complex, three-dimensional human being is great. This is a character who grapples with the expectations of her gender, faces demons, and repeatedly saves the world. That she is such an empowered female character reflects an ideal rather than a reflection of something directly visible in our world, but I believe that serves the story and helps challenge embedded assumptions in the audience.

This is the type of story that subverts the standard. It offers the female lead the fictional power that is disproportionately offered to men, and gives her the chance to save others in a medium where women tend to be portrayed as needing to be saved. In showing Buffy's capacity for heroism—in both her powers and in her personal character—the show represents a belief that may not be commonly held but that is far better than the general beliefs of our society.

The use of fictional tropes to undermine the imbalances in power between genders is (arguably) an idealization of the world, but one that effectively confronts an unfair reality in our own world that is born out of our assumptions rather than out of fundamental reality. In presenting this ideal, a simple truth is placed prominently before viewers: That women need not be relegated to narrow social roles, that they can be feminine and strong, and that they can be the heroes of their own stories, saving others rather than being saved themselves.

Alternatively, rather than presenting the world with some of its injustices addressed, writing can actively question the assumptions that underlie injustice by flipping that injustice on its head. This is what Mikhail Bakhtin referred to as a "carnivalesque," where social roles were subverted and inverted.

My very favorite example of this is Patrick Rothfuss's Wise Man's Fear, where one society the protagonist encounters is matriarchal in the same way that the U.S. is patriarchal. It is not that men are made into slaves or anything, but that women tend to hold the positions of power and the society holds assumptions about the world that make it seem as though men are inferior. The presentation of this embedded sexism (which, at one point, even shows up as "noble sexism" from a woman to a man) creates a dissonance that makes it easier to recognize the embedded sexism in our own society.

Obviously, the power imbalance between men and women in our society is just one point that needs to be discussed and addressed. Countless other groups are being underrepresented and harmed. But ultimately, this same notion remains true: It's possible to present an idealized version of reality, or an inverted version of the world's injustice, and creating such worlds can be an effective tool for opening a discussion about social norms that may otherwise go unquestioned.

All of this, ultimately, is to say that it's possible for activism to take many forms, and there's nothing inherently wrong with any of them. In fact, there are many ways in which these forms of activism are superior to thoughtless reproduction of our existing (and inaccurate) cultural assumptions. While we may not be obligated to use our work as activism, it's important to acknowledge that all stories are going to influence our assumptions—either by challenging or reinforcing them. As writers, there are many paths we can take while faced with the decision on how to answer that question on writing as activism. The important thing is that we choose consciously and with our eyes open to the consequences of our choices.

"I think one of the most compelling arguments against treating writing as activism is that art should represent the world around us accurately rather than in an idealized way. One proponent of this view was Anton Chekhov who famously said:

'One has to write what one sees, what one feels, truthfully, sincerely. I am often asked what it was that I was wanting to say in this or that story. To these questions I never have any answer. There is nothing I want to say. My concern is to write, not to teach!'"

This brought to mind the Art Of Fielding by Chad Harbaugh. He writes of college "freshpersons" rather than "freshman." Over and over again. Both in narration and in dialogue.

For example, one of the characters says something along the lines of, "I didn't know you're a freshperson."

I'd say nobody speaks like that in real life. If my measly life experience is worth anything anecdotally. I've certainly never heard that word used in real life.

And so the effort to bring some sort of gender equity or non-bias neutrality to the story and his readers, I suppose is what he was attempting to do, and I think that is admirable, came off to me as a huge distraction to put it simply.

In a book about sports I felt like I was being broadsided by a political agenda. It started me thinking, yeah, but not about gender issues. It made me wonder what Harbaugh suggests we do with the words "woman" and "women." Woperson?

I wanted to continue enjoying an otherwise terrific story, but his apparent activism, if you can call it that, led me astray everytime the word "freshperson" came up.

I asked my wife for a different perspective wondering if I was making too much of it. She dismissed it instantly: "Oh that's ricidulous!" She bristles every time a man, clued in to her profession as some sort of health care provider, assumes she is a nurse rather than the doctor she really is. She's perfectly aware of these sorts of issues in our culture. But even for her Harbaugh's language got in the way of his story.

A decent essay writer is an excellent specialist of summary helper.  From time to time you plunge into the essence to complete the exam on the subject, but it turns out, on the contrary, with numerous material and data than you could foresee.