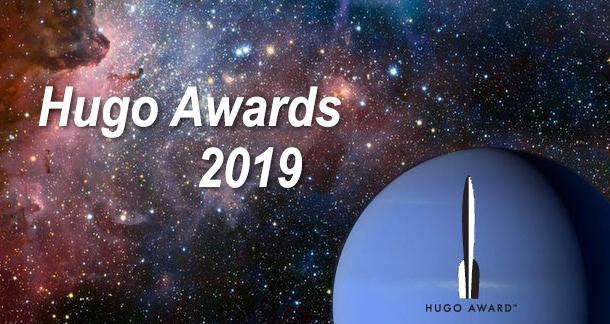 Drumroll, please — the 2019 Hugo nominations are out!

In case you don’t follow the genre avidly, the Hugo Awards are one of the premier accolades in science fiction and fantasy. And if the 2018 Hugo Awards are anything to go by, 2019 has a lot to live up to. Last year, we were witness to history as N.K. Jemisin won the Best Novel award — for the third year in a row. Needless to say, she’s the first author to do so, and her Broken Earth trilogy was hugely deserving.

This year’s victors are up in the air until August, which is when the winners will be announced. This post will give you a rundown on what you need to know about our finalists before then. If you’d like to take a look at the whole list of nominees before we start, head here. And if you're inclined to devour all of them in the space of a month, go right ahead. As Tyrion Lannister once said, "A mind needs books as a sword needs a whetstone, if it is to keep its edge."

With that said, let’s dive in!

Best Novel is going to be an incredibly competitive category

Get ready for a heavyweight matchup right from the onset: all of the authors in the Best Novel category this year are prior Hugo nominees. Out of the six, three of them — Mary Robinette Kowal, Rebecca Roanhorse, and Catherynne Valente — have won Hugos before, though not for this particular category. Meanwhile, Becky Chambers, Yoon Ha Lee, and Naomi Novik have earned nominations for consecutive novels. And that’s without even mentioning the controversial snub of Madeline Miller’s hugely popular Circe! Thus far there’s no clear favorite, either, so this category is one to bookmark as the winner’s announcement draws closer.

Women in general are winners

In some other not-so-breaking news: female science fiction and fantasy authors are awesome. And the Hugo nominees are reflecting that. Let’s break it down.

In the Best Novel category: five out of six of the finalists are women.

In the Best Novella category: five out of six of the finalists are women.

In the Best Novelette category: five out of six of the finalists are women.

In the Best Short Story category: five out of six of the finalists are women.

In the Best Series category: four out of six of the finalists are women.

Not so much of a trend as it is a pattern at this point, women dominating the nominations in all categories can be attributed to any number of reasons: more women writing in fantasy and science fiction, female authors in the genre being taking more seriously, women’s works being more widely marketed, etcetera. Either way, it’s shaping up to be another winning year for women — which is a great sign for science fiction and fantasy as a whole.

Tor.com is (again) ruling the novella and novelette roost

This one probably isn’t going to be a surprise to anyone, but for the second year in a row, Tor.com completely dominates the pack of novella and novelette nominations. Five out of six of the nominated works in the Best Novella category were published by Tor.com, and the online science fiction and fantasy magazine is also attached to three out of five of the works in Best Novelette.

It’s not that much of a shock, especially since Tor.com has made a concentrated effort to publish novellas and novelettes — stories of relatively short lengths that are suited for digital reading, in comparison to Tor Publishing’s novel-length works. The decision is clearly paying off in spades, even though the category’s going to turn out to be a bit of a family feud, as fan favorites Binti and Gods, Monsters, and the Lucky Peach square off against each other. (And while I’m on the topic — the nomination for Zen Cho’s “If at First You Don’t Succeed, Try, Try Again” on Barnes & Noble’s Sci-Fi and Fantasy Blog is a pleasant surprise to see in the Best Novelette category and deserves a shout-out!)

Here are the new faces to watch

While many names on the ballot end up being repeat nominees, it’s exciting each year to see who are first-time finalists. Here are some of the new faces entering the mix this year that you might want to know:

I just want to use every opportunity possible to honor Ursula K. Le Guin, who died last year. Fittingly, she was the first woman to ever win the Hugo and the Nebula Awards (for Left Hand of Darkness in 1970). With seven total Hugo Awards and countless more accolades under her belt, she remains one of the most powerful and defining forces that science fiction has ever seen.

In 2018, she won a Hugo for No Time to Spare: Thinking About What Matters (which was awarded to her after her death). This year, she’s posthumously nominated in two categories: Best Art Book for The Books of Earthsea: The Complete Illustrated Edition and Best Related Work for Ursula K. Le Guin: Conversations on Writing. It’s rather safe to say that her lasting impact on the genre isn’t over yet.

It’s a diverse mix this year

An important thing to note: last year’s Hugo Awards was a triumph for diversity, and this year seems to pick up right where it left off. For instance, the 2019 Best Novel category features two writers of color and at least 2 LGBT writers, while three of the nominees for Best Novella are authors of color and two are LGBT. Needless to say, this is a welcome sight, especially after the ugly controversies that the Hugos have experienced in the past.

In one of the more surprising plot twists this year, Archive of Our Own (or AO3, for short) was nominated in the Best Related Work category. For anyone who isn’t familiar, AO3 is a fanfiction archive that was first launched 10 years ago. It’s completely free to use and houses 2 million users (as well as 4.7 million works of fanfiction) today.

This is the first time that a fanfiction archive has been nominated for a Hugo, and some purists argue that it’s not a work of nonfiction, which is traditionally what the category comprises. Others assert that AO3 is a vital resource for the community at large and thus qualifies under the “related to the field of science fiction, fantasy, or fandom” and “noteworthy primarily for aspects other than the fictional text” clauses of the Hugo Award’s official rules:

3.3.6: Best Related Work. Any work related to the field of science fiction, fantasy, or fandom, appearing for the first time during the previous calendar year or which has been substantially modified during the previous calendar year, and which is either non-fiction or, if fictional, is noteworthy primarily for aspects other than the fictional text, and which is not eligible in any other category.

Vox has an in-depth write-up on the implications and significance of AO3’s Hugo nomination. So does Slate. I’ll let you decide which side you fall on the controversy. In the meantime, congratulations to the authors of 4.7 million fanfics on AO3, who contributed to what AO3 is today — though a member of the Hugo Awards Marketing Committee has since clarified that they can’t go so far as calling themselves Hugo nominees.

The winner of Best Dramatic Presentation, Long Form is up in the air

This ever-popular category is going to be an interesting one to watch, as Black Panther and Avengers: Infinity War — both huge blockbusters in the Marvel series — come up against each other for the win. That said, Spider-Man: Into the Spider-Verse, a universally acclaimed animated movie, may play spoiler—and then you have Annihilation, A Quiet Place, and Sorry to Bother You, all films that are deserving of the nod.

If you’d like to watch them and form your own opinion before the winners are announced, you’re in luck! Here are the relevant streaming sites where you can find them (as of July 2019):

Last but not least, video essayists Lindsay Ellis and Angelina Meehan earned a Best Related Work nomination for their documentary series about The Hobbit — which plays in full on a little site that you might already know called YouTube.

Though it’s not the first time that a YouTube video has been nominated for a Hugo (comedian Rachel Bloom was nominated in 2010 for her “F-ck Me, Ray Bradbury” music video), it is the first time a Hugo nomination has gone to an online video essay. This is a huge step for the medium, which expanded from Best Related Book to Best Related Work in 2010. Hopefully, it’s a sign that videos are gaining respect in a category that has traditionally been dominated by books.

What are your thoughts? Who will you be rooting for this August?

Lit reactors has a working website for online writing classes. It also has columns from magazine that includes everything you need to improve about this year. And they provide custom essay writing to understudies to complete their task easily. They organized awards which is mostly won by women. Join their website for more.

For the employer, I wanted to provide a letter of recommendation where the person recommending me only emphasizes the right aspects and includes facts that will help me stand out and be chosen. To do this, I found a proven resource where specialists were able to provide me with a letter of recommendation maker adapted to my profession and position at my chosen company. I was not mistaken with the choice of specialists, since professionals worked on the text and this helped me to stand out among the other candidates for this position and attract the attention of the manager. A little time passed and I was invited to work at this company. I was happy to be among the professionals.