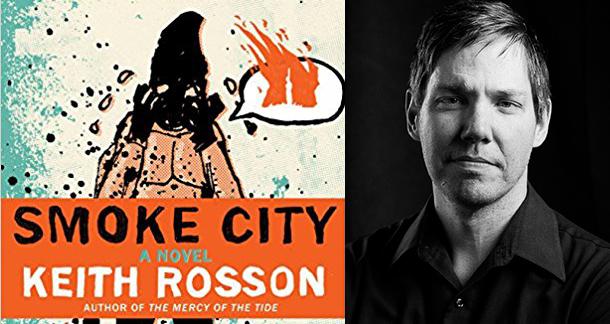 Show of hands – anyone here get their first novel published? Like, the first one. The first one you ever wrote. That one that you shove underneath old tax forms or stick in a folder on your computer marked Vacation Pics so that no one, on the off chance they break in and decide to, you know, start lurking through your hard drive for old literary attempts, ever finds it. That book.

My first novel was written when I was 20 years old. As an idealistic punk raised on issues of Maximumrocknroll and the emotionally overwrought inserts of hardcore records, I penned what was essentially a way more awkward and way less fun version of Ed Abbey’s The Monkey Wrench Gang. While I’m normally a big proponent of saving your work, I can say without reservation that none shall shed a tear that it’s been lost to oblivion.

The second one I wrote a few years later. It was, without a doubt, a dense, convoluted, multi-POV mess. I was, like many young people who had read it and suddenly become enamored with the possibilities of what literary fiction could do, aping Infinite Jest way hard. But I’d also been writing nonfiction and short stories in the interim, and while they weren’t very good either, there was a spark in that second book. A few gems in there.

My third novel was written a decade after that. (Again, I should note that the constant here was that I was still writing other things even when I wasn’t tackling novels, and everything, across the board, was improving.) We can never really plan the odd, circuitous route that our individual writing and publishing history will take; that third novel, Smoke City, will be published in January 2018, but the fourth one, The Mercy of the Tide, was the first book to be published. See what I mean? Maybe some folks write a book and then get it published and that’s that. Point A to Point B. But that hasn’t been my experience, and it’s not been the experience of most of the writers that I know. The world’s messy, and writing usually is, too.

While people are looking at your work, always, for all that is good and holy, be working on something new.

It’s really a question of embracing the missteps and trying to look at them as stepping stones instead. Even when you’re writing shit, you’re improving your craft. You’re getting it out of the way. Smoke City was the first novel I’d written that I felt had that sustained spark, a longer work that held my own interest while also maintaining all those necessary elements for a novel: a cohesive – if veering – structure, characters that changed and grew, a sense of emotional transaction and consequence through the story. But it was a long, messy, painful process getting to that book.

I worked hard on it. Worked on it for years, really, through seven, eight, ten edits, maybe more. The novel being published in January is a vastly different story than the one I initially started out writing. A different cast of characters, a different plot, way different emotional tone. But I kept at it. When it was done, I submitted my query letter to dozens of agents, took their suggestions when they resonated, sent out partials and full manuscripts when I was asked for them. (Again, there’s that need to take valid critiques to heart, while also having unwavering faith in the value of your work. That’s the tightrope.) I finally landed a great literary agent – after nearly a hundred submissions. We edited the book together and while he sent it out trying to land a home, I wrote The Mercy of the Tide. (I really do only have a few surefire pieces of writing advice, but one of them is this: While people are looking at your work, always, for all that is good and holy, be working on something new.)

We had some nibbles from publishers, but nothing solidified. In the interim, I finished writing Mercy. And then my agent had two finished novels of mine, and it might as well have been on repeat, the responses we got towards both books now: “It’s great, but we wouldn’t know how to package it.”

Almost everything I write is full of false starts. Longer works, short stories, essays. It’s just how I work, and once I accepted it, my writing life became entirely more enjoyable. I stopped trying to fit a monster-shaped story in a literary fiction-shaped hole, if that makes sense. I understood, finally, that the two could exist within each other, if done carefully. My debut novel (but the fourth one I’d written, remember?), The Mercy of the Tide, is an alternate history novel set at the height of the Cold War in 1980s coastal Oregon. But I originally began that novel in a kind of post-apocalyptic coastal town set in present day. As I wrote it, I kept running up against roadblocks in the story: How had this present-day world become like this? What were the catalysts that made it so? The history of this fictionalized town and its people kept calling out to me. 30,000 words into that story and I realized I needed to go back in time and start telling the story of how the world had gotten this way.

Thirty thousand words! A third of a novel! And it was time to start from the beginning.

So I started over. Told the story from the very beginning.

But while my agent was shopping these two books around, I hit this wall. I was panicked. I had this idea that my stuff – the stuff that I liked to write, that made me happy, that afforded me that sense of purpose and being a part of the world around me – was just too weird. I needed to come up with something marketable.

So I decided to write a crime novel.

Straight genre stuff. No ghosts, no monsters, no alternate history, no weird shit. Guys with guns trying to get what they want. Something that would sell. That could be placed in a specific section of a bookstore without someone having to think about it.

I wrote it, that crime novel, and it was the worst year of my writing life, without a doubt.

It was also the worst book I’ve ever written. Yep, even worse than The Heavy Handed Monkey Wrench Gang Part Deux that I exuberantly vomited up when I was twenty years old. From a technical aspect it was assuredly better (I had a few decades of experience at that point), but it was a hundred thousand words of absolute joylessness. And that is the only real, tangible, twenty-words-or-less, boots-on-the-ground lesson that I feel comfortable sharing as irrefutable: Write what you want to write.

Writing is hard enough as it is. All that fear and doubt, all that nagging, sharp-toothed insecurity to wade through every time we sit down and get to work? The joy should be there to combat all that, even as we walk the tightrope. What’s the point otherwise?

I spent an unhappy year writing the crime novel and with a profound sense of relief, shelved it. Put it away.

Then I went and started writing the book that I wanted to write. And it too has suffered through a number of false starts and sudden, wild veers in plot and characterization. But it has all the hallmarks of strangeness in it, all those little capstones that make writing so meaningful and worthwhile to me, and I’m almost done.

Oh, and while that happened? We found a publisher for those two weird books.

And that’s what has changed for me. Not the false starts and missteps and abandoned chapters or plotlines. I’ve written enough books now to understand that that’s just my personal process. But trusting that process has become less of a gamble, less of a crazed leap of faith, and more a simple act of belief.

I know that if I keep working, even if I have to backpedal to unearth the really good stuff, the book will get done.

Keith Rosson is the author of the novels The Mercy of the Tide and Smoke City, and his short fiction has appeared in Cream City Review, PANK, December, The Nervous Breakdown, and the recent Behind the Mask story anthology. A fierce advocate of public libraries and non-ironic adulation of the cassette tape, he lives with his partner and a pair of three-legged dogs in Portland, Oregon. More can be found at keithrosson.com.