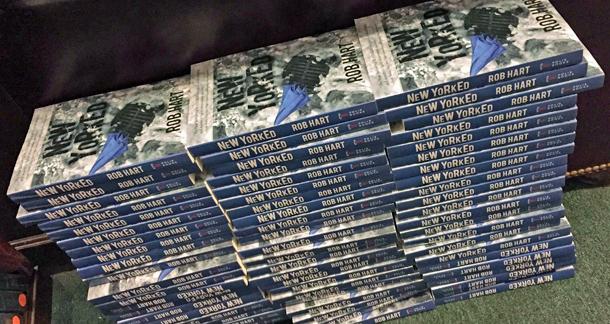 With a book release comes signings. I've done three thus far for New Yorked. The release party at The Mysterious Bookshop in Manhattan, a visit to my hometown Barnes & Noble on Staten Island, and at the Mystery Writers of America table at Book Expo America.

1. Get people to show up

This is so much more difficult than you would figure. But getting anyone to show up anywhere is tough. Everyone has demands on their time.

I've been to signings where only a handful of people show up. It happens. Accept that reality, then get to work.

Start early. Do a Facebook event page, because people have to RSVP and then they'll get reminders. Do an e-mail blast to all of your Luddite friends who aren't on Facebook. Make sure the bookstore has the event up on their site and is doing some promo—but understand the impetus falls on you here. Bookstores don't generally have a built-in audience that flocks out to every event.

Get creative. Lean on your musician friends—after years of paying covers to see their bands play, they owe you. Guilt them. Did you recently get married? Go through the list of addresses you used for that. Send out notifications to local media, both print and online, because hey, you never know. Make postcards and give them away at the bookstore and in restrooms and to random strangers on the street.

Smile. Be charming. Wear a clean shirt. Tell some jokes. It's time to curate a public persona. Make it a good one.

2. If you can, have booze and food

This will help with the first item on this list. No one wants to go to a party that doesn't have one or both of these things. Keep it simple. Think beer, wine, pretzels, and chips.

That said, some venues won't really allow for this. But it helps. Booze always helps.

3. Get your mommy to help you

Find a family member who is proud of you and lean in to that. Again, guilt is a powerful weapon in your arsenal.

In my case, it was my mom who proved she has a future in PR. When Barnes & Noble printed postcards for my event, she sent out a ton of them to family and friends. She may or may not have appropriated a mailing list from her job. She sent the Facebook invites to something like 200 people. She tracked down three of my grade school teachers and got them to show up.

If I was paying her I'd give her a raise. But I'm not. Sorry, mom! But also, thanks!

Here's some advice I got from All This Life author Joshua Mohr: Sometimes no one shows up. You can't control the weather. But you're not just there to sell copies. You're also there to charm the bookstore employees.

Because when your book runs out, you don't want them to think, "That's the guy who threw a tantrum about attendance."

You want them to think, "Oh, that's the guy who was cool. I'll order some more copies."

Plus, too, you need to put on your party face. I tend to not like being the center of attention, but a signing is no time to be shy. Smile. Be charming. Wear a clean shirt. Tell some jokes. It's time to curate a public persona. Make it a good one.

5. Stock up on supplies

You have to decide what kind of pen you're going to use. First step, realize how weird your life has gotten that you need a pen preference. La-di-da. I like a fine tip Sharpie. It's bold and feels substantial.

Also helpful: sticky notes. Hat tip to The Fatal Flame author Lyndsay Faye on this one. Say someone shows up to your book signing. This is a person you've known for years—and you blank on his or her name. How awkward is that?

"Who should I make it out to?"

Ask the bookseller to include sticky notes to people who are purchasing the book.

Because you also want to make sure you're spelling peoples' names correctly. This goes back to my days as a reporter, when I would laboriously spell people's names back to them. Some people thought it was silly, but consider, Steven or Stephen? Jeff or Geoff? Here's my favorite: Mary Anne or MaryAnne or Maryanne or Marianne or Maryann?

6. Decide how your name should look

Even more than type of pen, you have to decide what your signature is going to look like. Is it going to be like how you sign your checks? Are you willing to put your identity at risk like that? Is it insane to ask that question?

But what if someone asks me to sign a book and then forges a bank loan in my name? Who's laughing now? The person with all my money, that's who.

7. Come up with a game plan

Are you going to read? Answer questions? Do a dance? Hold a raffle? Sacrifice a goat? You can't just get up there and wing it.

I didn't read at either of my signings. I don't like reading from the book. I come from the Chuck Palahniuk school of readings—he writes stories that are meant to be read, with the correct cadence and pacing and scope for a live event. Novel excerpts always feel unsatisfying, and I expect the people there are going to read it anyway.

At The Mysterious Bookshop, after a very kind introduction from proprietor Otto Penzler, I thanked some folks and let everyone get back to the drinking. We also raffled off the custom umbrellas my publisher had printed up. Short and sweet.

At Barnes & Noble, I took some questions and then got on with the signing. Never underestimate the value of brevity. Especially since a lot of people might be stopping in to get the book before cutting out early.

8. Don't think too hard about inscriptions

I really stressed about being able to write clever, funny, unique things in every copy of every book I signed. For some people, it was easy. For others, I fell back on stock phrases—a few of my mom's friends got "Sorry for all the cursing!"

But a few times I found myself struggling. I mean, I'm a writer dammit. I should be able to come up with something a little more meaningful than "I hope you dig it" or "Slainté" or "Wooo!"

Then I accepted that the important thing was meeting the person, holding the book, signing my name, smiling, thanking them. I get less concerned about being 'on' and 'funny.' My signatures and inscriptions began to look a lot less sloppy after that.

Reviews on sales sites—Amazon, Goodreads, Barnes & Noble—help with discoverability and retail promotions. They are an incredibly important metric by which a great many things are judged. So as you're working the room, make sure to slip that into conversation. Don't worry. You feel less desperate the more you do it.

Not everyone is just going to buy the book out of obligation. Sometimes you've got to pitch it to them.

10. Make sure you've got an elevator pitch

At Book Expo America I had a stack of fifty copies of New Yorked to sign. This was my first event, and the line was made up mostly of strangers. The first person who wanted a copy asked me what it was about... and I blanked. I stumbled through some awkward explanation that didn't really do it justice. I was able to refine that over the next few people, so that by the time we got to the end of the line, I had something solid nailed down (sorry, people at the start of the line).

So give it a modicum of thought first! Maybe even practice it a little? Not everyone is just going to buy the book out of obligation. Sometimes you've got to pitch it to them.

11. Get over that terrified feeling

Ten minutes before The Mysterious Bookshop signing, with no one really there yet, save one friend and my sister, I saw my publishing life flash before my eyes.

This was it. Game over, man.

And then the room filled up. We sold a ton of copies. People had fun. Same thing at Barnes & Noble. Ten minutes to go, only a few people there, and I've got that feeling again, like I'm dead in the water. Then the place filled up and we sold out every copy they had ordered. Plus some—a few folks had to do special orders.

Writing is a solitary act. I think that's why there's a certain type attracted to the art. People who want an outlet where they can say things to themselves, and let people take it up on their own time. The thought of getting a crowd to come out to a place and then you stand in a spotlight is scary enough. The idea that no one actually cares enough to show—that's worse.

But hey, the world is a tough place. You get over it, and remember that what you're experiencing is an incredible, life-changing thing. A fulfillment of a lifetime goal that leaves you spent and awed and absolutely and completely thrilled.

So, have fun. Enjoy it. You earned it.

Then get back to work. The next 10,000 words aren't going to write themselves.

edsikov from New York by way of Natrona Hts PA is reading absolutely nothing July 7, 2015 - 9:51am

This is a fantastic column, Rob! GREAT WORK!

I know from experience that these 11 tips are crucial for a successful signing. Only once did I have a reading/signing at which nobody showed up. I was mortified. Fortunately, the bookstore staffers were more mortified, and I didn't take it too personally.

I also want to say that NEW YORKED is a terrific book. I'm on page 46, and I stopped only because I didn't want the experience to be over too fast. It's beautifully written. Buy a copy immediately!

Class Director
Rob from New York City is reading at a fast enough pace it would be cumbersome to update this July 7, 2015 - 10:42am

Thank you Ed! Glad you're digging it.

Thanks Rob. Great list. My appointment w doom is a month away.