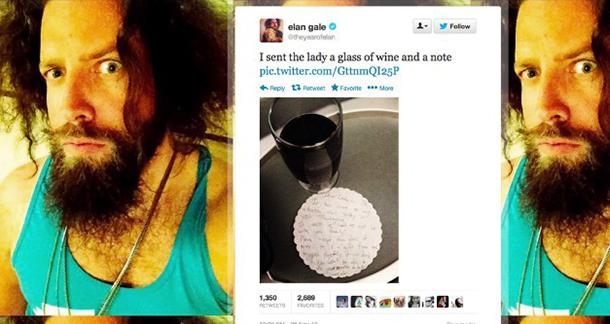 This year marked the first Thanksgiving I ever spent away from my family. I have to admit, I was not quite prepared for how lonely it would make me feel. As far as gatherings go, Thanksgiving has not ever featured very heavily in terms of priority for my extended clan, but still, my roommates were out of town and with a significant other, respectively, and spending the eve and most of the day of what is theoretically a major holiday alone in chilly New York proved to be more disheartening than I anticipated.

That's why Elan Gale—the latest media darling turned whipping boy—and his Thanksgiving Day "viral" twitter war were all the more welcome to me. To recap, Gale catalogued an escalating feud between himself and an obnoxious fellow passenger on a holiday flight. According to Gale's narrative, the mysterious "Diane" was extremely short with flight attendants concerning a connection she had to make, so Gale sent her some alcoholic gifts and smart-ass notes. The whole thing ended with Diane punching Gale in the face upon arrival at LAX, which resulted in her missing the connection she had been so concerned about in the first place. In the end, Gale directed twitter traffic to a short essay he had written about being in the service industry and the importance of being kind.

The only problem, of course, was that he made it all up.

To be fair, only a few hours after the feud went viral, it began to trickle out that Elan Gale was a TV producer (red flag #1), a title which was later upgraded to reality TV producer (red flag #2). A comment thread associated with the story saw a woman claiming to be Diane's sister allege that Diane was distraught over her connection because she was dying of cancer (possible red flag #3). After that last bit of news, I searched "Elan Gale hoax" and found a lot of unsubstantiated claims that the whole thing had been faked, and then a write-up of an eerily similar "viral feud" type twitter narrative that Gale had also been responsible for, that had been dismissed as fake (red flag #4). Within a day or two, Gale admitted that he had made the whole thing up, but in a manner appropriate for somebody who makes a living off of dishonesty, manipulation, and general awfulness-for-hire. He refused to admit he had been caught in wholesale deception, instead insisting that anyone who didn't understand the "comedy" of the situation was the one with the problem (this sounds vaguely similar to people who are caught saying horribly racist things in public and then claim their comments were "satire").

This latest absurdity from Gale is certainly not the first time anybody has ever lied on the Internet, but it's beginning to reveal the true fallout of all that digital deception and disregard for sources and citations.

So is this important? The popular short answer is no: Gale is a successful TV producer and his ability to trick millions of people into buying his fiction will probably net him more credibility in his chosen profession, not less. Many people, my friends and family included, have said they don't really care about the veracity of Gale's narrative. The text is the important thing, the logic goes, and as long as it was funny (it was, I myself shared the link with an enthusiastic note on my social media feeds), it served its purpose.

But I'm not sure I agree. It's become tired to point out that the Internet is everything, but as more and more of what we read and write begins to shift from the printed page to the hourly updated screen, I find this kind of line-blurring troubling. Gale isn't a writer by any stretch of the imagination, much less a good one, yet his rambling grabs for attention garnered more views and shares and chatter than any other original content that week (of course, the holidays are always a slow draw for this type of thing). There's not much room left on the Internet for "original content"; most of it has been replaced by clickbait and thinly disguised advertising. As my dad once said dismissively of blogging, there's an issue of vetting and credibility. The only problem is, as it's shaken out, people like Gale, who are unrepentantly caught telling lies over the Internet, don't lower their own stock, but the stock of online writing and online writers as a whole. Gale doesn't have to convince an increasingly skeptical editor and audiences that his writing is credible and worth something. Once he's salted the already fallow fields of the Internet he can get back to waving money at fame-chasers and continue building his nest egg without blinking an eye.

This latest absurdity from Gale is certainly not the first time anybody has ever lied on the Internet, but it's beginning to reveal the true fallout of all that digital deception and disregard for sources and citations. As writing moves towards a 100% electronic mode of distribution, the rules and regulations that accompanied print are being left behind, and as a consequence, the intrinsic value of writing is dropping, perhaps rightfully.

Contrarians will point to writers of hallowed days past who bent the rules and walked all over our notions of a true story (something I've written about before), but the best tellers of tall tales from the olden times knew that the right attitude to cop was one of either full commitment or coy distance. Hunter S. Thompson didn't insist to anyone who would listen that his incredible narratives were 100% factual (and even if he did, how long would people have believed him?), and he certainly didn't get defensive when caught in and out and out lie (mainly because he was a clever enough author to never find himself in that situation, or if he did, he would out himself first).

For posterity's sake, I'm going to repeat that I don't think Gale is the first or last money-grubbing jerk who ever tried to make a quick buck by tricking people into buying his bullshit, and I wouldn't want to put him on a pedestal by labeling him "the man who killed Internet storytelling", but as more and more of these types of narratives come out of the woodwork, and as more and more of them get thousands or millions of page views, the space for people who want to write thoughtful, original content (and maybe even get paid a dollar or two for it) is shrinking.

Despite my own obvious bias, I'm as guilty of spreading this kind of dreck around as anyone. I shared the story and cracked up like anybody else. What I would implore readers and lovers of real content to do when facing the unstoppable tide of unverified viral content is to think about whether or not truth and accuracy has intrinsic value as relates to writing, and then decide whether or not stunts like the one Gale pulled really don't matter.

Finally, for the jaded skeptics who even outpace me in the "Rome is Burning" department, the people who sneer that Gale's a reality television producer, what should we expect of him? I expect him to be content with the ill-gotten dollars he already has instead of trying to conscript an unwilling audience into reality television 2.0, and if I may be so bold, maybe you should too.

Serious question: Do people speaking lies in everday life diminish the value of "speech" itself? Perhaps. But it is such a fundamental human activity, it can never be truly ruined. I might be taking your point a little too broadly. Isn't the potential of writing/speech/language/communication such that it will continue to be useful even despite its less-honorable instances?

Joshua Chaplinsky from New York is reading a lot more during the quarantine December 11, 2013 - 11:08am

First I'm hearing of this chucklehead. Saw this making the rounds, but unless it features a cat, I usually ignore this type of viral shenanigan.

Okay, makes sense. But, without widespread task-taking, how do you know that falsehood actually dominates internet writing?

Also: did EG actually make money off this, or are you just saying it strengthens his "brand"?

It's not necessarily dominated by that yet, but if people keep up the belief that this kind of stuff doesn't matter it most certainly will be.