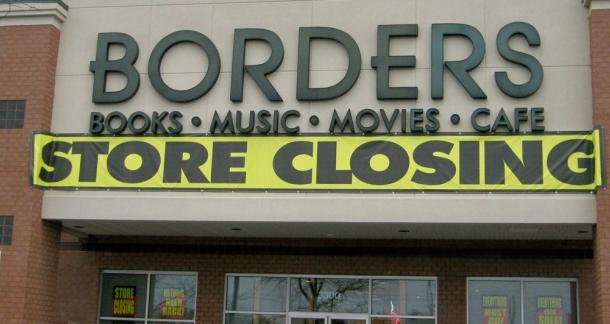 Way back in 2003, Borders Books and Music was at the top of its game, with more than 1,200 active locations in the United States alone (the chain also had stores in Australia, New Zealand, and Singapore). By January of 2010, the bookselling giant had shrunk to about half its size, boasting a measly 511 stores worldwide. On February 16th, 2011, Borders applied for Chapter 11 bankruptcy protection, and by September 18th, the last 399 outlets closed for good.

The many failings of the once prosperous Borders Group, Inc. have been closely scrutinized, but what does the disintegration of one of the largest brick and mortar booksellers in the world mean for the industry as a whole? After a little research, and catching up with several old friends who used to slave away in the book mines, a pattern began to emerge. A disconnection from the world of technological innovation has been making ripples in bookselling and publishing for quite some time. Only now are we beginning to see the full impact of these advancements, and if I were a betting man, I’d say this is only the beginning.

For the sake of posterity, it should be noted that betting on technology is always a risky prospect. The head honchos at Borders made a mistake no one ever could have anticipated back in the early 1990s. No less than Mark Evans, former Director of Merchandise Planning and Analysis, cited over-investment in music as one of the key reasons behind Borders collapse (you can read Mark’s entire essay at www.quora.com):

…stores were sized and modeled to provide a large music CD business which largely disappeared. In addition, infrastructure was sized to support this business, including a dedicated warehouse distribution facility.

Back in 1994, it may have seemed like a no-brainer to devote 45% of your retail space to selling CDs, a decision which seems tragically laughable today. In light of this, it has to be said that all my trumpeting of eReaders and eBooks should be taken with a grain of salt, but the core lesson remains the same: as a business, books are not immune to the dictations of a marketplace made fickle by the rapid advancement of technology.

I have an old friend, Amy, who works in Sacramento, California as a librarian. Way back in the summer of 2005, she worked at two Borders locations in Dallas, Texas after graduating from Rice University. In our discussion, the moment that made my jaw drop came when she informed me that at the time she was employed there, the catalog system could only be updated a few times per day. Obviously, this limitation made the system virtually useless to customers who were trying to locate anything that wasn’t stocked in large quantities or being heavily promoted, and a trip across town to find that “last copy” at another store was always a crapshoot. Borders' technophobia ran so deep that they outsourced their own online sales to Amazon.com. In his essay, Mark Evans also writes that by the time this decision was made, Borders.com was costing the company approximately $20 million dollars in losses.

They also dropped the ball on eReaders, but by the time this became an issue they were just trying to figure out how to keep the whole house from burning down around them…

It goes without saying that the Nook is a huge part of what has allowed Barnes & Noble to remain competitive while Borders has imploded, and Barnes & Noble's online site has always dovetailed well with in-store business: reserving copies of books, movies, and music for in-store pickup is easy and simple, and allows employees to soft-peddle “looking around.” which leads to more purchases (an ex-employee guessed that “If every store closed tomorrow [the website] would still do very well.”). But the degree to which Borders (poorly) ran its stores like any other retail location may have had something to do with its demise as well. Amy, who, at the time she worked at Borders, was earning a graduate degree in Library Sciences, was employed as a cashier, told she would be switched out to the position of bookseller after the holiday rush, and was then given excuses until she left the chain. By contrast, Allison, who worked for Barnes & Noble both in Mississippi and California, clocked hours as a barista, bookseller, cashier, and at the Nook counter. While there may not be a direct correlation between employee actualization and corporate profitability (though there is a relationship between morale and productivity) this example of Borders blindly mismanaging their available personnel speaks volumes about the mindset of the corporation.

Another chain that has done well in the “post eReader depression” is Half Price Books. Founded in Dallas, Texas back in 1972, the used bookstore now does business in fourteen other states. Ajai Raj, a writer and journalism student who I met back in college, worked at one of the Dallas stores for over a year before moving to New York City. I was unable to get a hold of any higher-ups at Half Price, but according to Ajai, the company has only seen a slightly narrowing profit margin. The reason? Part of it has to do with company culture: “If I was going to work for one corporation until I died, Half Price would be the one I would go to.” He’s not the first person I’ve heard rave about the store’s fair wages, hour paid lunches, full benefits, and insane employee discounts (the flagship location even has an electric car charger, for whatever that’s worth). However, even humble (not-so) little Half Price has a decent web presence that is somewhat similar to Amazon Marketplace. Frankly, if a chain a fraction the size of a giant like Borders had a better website and was well-known for treating their employees like human beings, the writing should have been on the wall decades ago.

It might be that the future of bookstores (and publishers, for that matter) depends not so much on the “imminent” displacement of printed material by digital distribution, but in the old guard recognizing what is becoming a thriving share of their customer base. According to Amy, the librarian, there are only two publishers (two!) out of the big six that have digital distribution agreements with the branch she works at. Like any other industry, the world of books is undergoing a transition in the face of new technology, which will serve as a sort of Darwinian weed-out process. For all you movie buffs out there, consider this: how different a place would Hollywood be right now if three of the “big five” studios decided that HD was a fad?

Right on, great article. I don't think the decline of Borders is a signal of the decline of bookstores.  You cite a lot of factors, and Borders just made a lot of bad decisions.  Circuit City is gone now, along with a lot of other companies that were huge at one time. While I do think that brick and mortal bookstores will struggle hard to compensate for ereaders and stuff, I don't think we will see them go extinct. If anything, the disappearance of Borders leaves the market open for an enterprising entrepreneur to step in and offer BN some competition. I believe it's possible. At one time I thought Myspace would take over the world and look what happened.

Really a great article, having worked many years for two of Australia's major book chains my BIG problem with Borders was service. The staff could care less, it was always an imposition to ask a question and that was if you could find someone to ask, their checkout system was slow slow slow, and unless there was a sale on, their books were always priced above the recommended retail. Truly, did they think we would not notice? Shelves were always untidy and stock often damaged, but don't ask for a discount on that damaged $60 book - not going  to happen.

Melbourne which used to be a city of wonderful bookstores is now after many such closures in a strange book bardo, but I am sure it will come out the other side. Small themed book shops still hang in there along with some truly great second hand bookshops. Maybe, just maybe this will be the return of the independent bookseller, which would be a wonderful thing! In my heart I don't think books should be a chain business.

E-readers and all are good, excellent, I loaded one up for a 3 month trip to Tibet, no way I could have taken the number of real books I can read in 3 months. But I still love a book in the hand. And nothing is better than losing an hour or so in a great bookshop with staff who read, recommend and make you welcome.

Amy the librarian wanted me to clarify that there are many more than two publishers that have embraced digital distribution at her branch. However, only two of the "big 6" publishers belong to this group.

Awesome. Hugely interesting. I remember going to a Borders that was about to close down and was selling everything off at ridiculously low prices and thinking: This is the first time I've enjoyed myself at a Borders.

One of the things I miss the most about my pre-kid-city-life, and there are several, is spending an afternoon surrounded by books and coffee. I love my e-reader, but nothing beats being in the book store with the real thing - unless of course you are toting along three cranky little kids, then the digital experience wins hands down! Great article!

Jeff from Florida is reading Another Side of Bob Dylan by Victor Maymudes November 28, 2011 - 6:07pm

Yeah it's an interesting question -- what really happened? You pretty much nailed it though. The only thing I would add is that a corporation is only as good as the people at the top. If the two bros who started Borders way back when in Ann Arbor had stayed on to captain, 5 to 1, Borders would have given B&N a run for their money.

When Borders Group announced that they would be closing their final 264 stores and putting their remaining inventory on sale at heavy discounts, the news was both shocking and inevitable. Here you check this complete coatings christchurch and get more helpful things about roof paints. Although the loss of Borders has been criticized as another symptom of an ailing industry, the company's closure may not signal the death of bookstores.