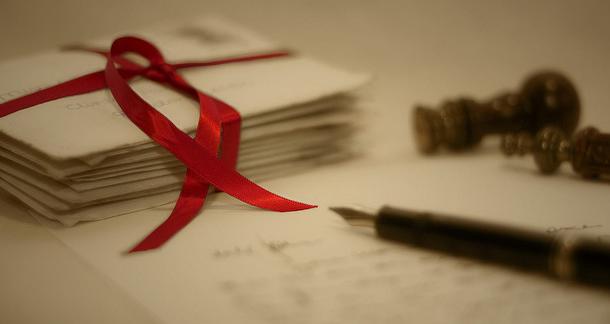 The Dickinson House Museum is a quiet place on the outskirts of Amherst, Massachusetts. There’s nothing dark or brooding about the atmosphere there, particularly not in the poet’s bedroom, which is a comfortable space with a good amount of light. When I visited in 2013, the tour guide was careful to point out that Emily was probably somewhat livelier than the dour-faced portrait of her as a 17-year-old reveals, and her hair a more reddish hue. She had been sick just before the image was taken, unfortunately. But as the only photo of the poet until 2012, it became representative of Dickinson, like a fly trapped in amber. Dickinson’s hair color is far from the only misconception about her life to be questioned recently. Mental Floss ran an article in December about the writer’s romantic affairs. Marked as a lifelong recluse and a spinster, the fragments of several correspondences suggest a number of unknown relationships. A gossiping neighbor referred to the unmarried Dickinson as a woman with no “idea of morality” after walking in on her in the arms of a stranger.

Whatever the truth, none of the accusations made by Dickinson’s neighbors are as scandalous today as they would have been in the poet’s lifetime — so does any of it matter to modern readers? To what extent do the private lives of writers manipulate the perception of their work? The majority of Dickinson’s poems were published posthumously, after all. She would have been unable to stand in their defense if some later editor had found them too licentious for the 1890s and decided to tear them to bits. If her personal reputation hadn’t originally been one of a pious virgin, would we still be reading her poems today?

It’s not an easy question to answer, because Dickinson’s poems did survive to the twenty-first century. Writers have always drawn inspiration from their love lives, but what happens when the ink has dried, and the author has left this world for the Great Typewriter in the Sky? What remains is not only a body of work, but a reputation, something that poet Walt Whitman was quite aware of. In 1882, Whitman was paid a visit by the young Oscar Wilde, an ardent admirer of his work. David Friedman, author of Wilde in America: Oscar Wilde and the Invention of Modern Celebrity, writes of the encounter:

Whitman had pioneered the idea that a writer in search of fame should fashion himself as a literary artifact…No writer had ever presented himself to the public this way, let alone so intentionally.

Wilde was already creating a publicity stir despite the fact that he hadn’t yet written very much at the time of his visit with Whitman. Friedman credits Wilde with being one of the first celebrities to figure out that fame can come before the work that it celebrates. It’s a sentiment that Truman Capote mirrored almost a hundred years later, when he mused that “an exotic photograph” of himself on his first book’s dust jacket had often been credited as the reason for the novel’s success.

Perhaps more than any other author of the 19th century, tales of Wilde’s love life have colored his literary contributions. Among other myths about the playwright, there are rumors that ‘Earnest’ is a secret code-word for ‘gay’ in The Importance of Being Earnest, and green carnations a covert symbol for homosexuality (both very unlikely). The Picture of Dorian Gray caused a massive outcry over its “homoerotic themes” when published, to the point where the magazine it first appeared in was recalled from newsstands. Even Wilde’s death, long attributed to syphilis, is thought by contemporary doctors to actually have been caused by an ear infection and meningitis.

Fairly or not, it seems that people do care about the love lives of celebrities, whether they’re actors, athletes, musicians, or writers. Why? It’s anyone’s guess, really, but one circulating theory is that we use these individuals as a sort of societal yardstick to measure our own behavior by. When an Oscar Wilde comes along, it forces society to uncomfortably reevaluate which behaviors are acceptable. Or, as Robert Wright postulates in The Moral Animal, "Knowing who is sleeping with whom, who is angry at whom, who cheated whom, and so on, can inform social maneuvering for sex and other vital resources."

In the end, it’s all speculation. Food for thought this Valentine's Day as you get to work on that "exotic photograph" for your own dust jacket.

The Blagger's Guide to Gore Vidal

Then forgive me if I refuse to be that yardstick. I'd rather be unknown, and my work the only thing I'm remember for.:P

Love gives great inspiration for the writer and makes him create many and many wonderful things. It aslo helps me write my Essay State and be creative.