Do or Dialect: 6 Tips for Building a Believable Voice 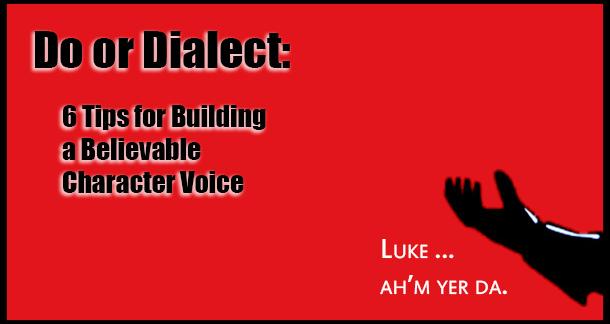 The image above is based on a promotional poster I saw while in Edinburgh. It was for an event titled Scotland at the Cinema, and each poster featured a different movie quote translated into the Scottish dialect, as with the Star Wars reference above or with "Frankly hen, I dinnae gie a damn." For me, these "translations" were a reminder of how important a person's dialect is to who they are. A Walt Whitman quote comes to mind:

The English language is the accretion and growth of every dialect, race, and range of time, and is both the free and compacted composition of all.

While Hollywood, prime-time television, and standardized usage have worked hard to create one dialect of English to rule them all, the peculiarities of regions, cultural groups, and individuals persist. In creating a character's persona on the page, the value of capturing their unique voiceprint can't be underestimated. However, poor portrayals of dialect can range from distracting to infuriating. Here are six tips on capturing the oddities of a character's dialect without pissing off (or on) your readers.

1. Don't write out the dialects phonetically.

For a few decades, writing out the phonetic representation of a character's dialect was all the rage. It survives in today's literary canon thanks to work like Huckleberry Finn, where one of the first bits of dialogue reads as follows:

Why has this approach fallen out of favor? For one, it should be obvious just how distracting and confusing this sort of passage can be. For another, it contains an embedded prejudice against users of the dialect. Perhaps most importantly, though, it's all based on a logical misstep: Writing out the phonetic oddities of any given dialect assumes that one's own dialect is the correct one.

We all have phonetic peculiarities. People in my hometown pronounce "mountains" as "mah'ns," but I would never write that out in dialogue. People with "proper" British accents tend to use soft R's, but that doesn't mean we omit the R's on the page. And despite spelling it "through," no one pronounces it "thro-u-gh"; that word's spelling is just trying to cheat at Scrabble.

The point is, our spelling and pronunciation are not exact reflections of one another, so unless you're going to write out the exact phonetic traits for every single character, your logic for writing out a single character's dialect doesn't hold.

2. If you must write out dialects, use a light touch.

Every so often, it's worth emphasizing a character's dialect by putting it into the spelling itself. For example, there really is a difference in meaning and tone when you compare "I'm gonna getcha" to "I'm going to get you." If phonetic representation gives enough benefit to outweigh the distraction for readers, then okay—but use a light touch. I suggest three guidelines:

There is one exception to these guidelines: If you're trying to show that the character's dialect is confusing or disturbing to your point-of-view character. In those instances, forcing your reader to become confused can work to your benefit. Just make sure that benefit is worth the risky move you're making.

3. Rely on syntax and grammar.

Syntax and grammar can do far more to represent a character's dialect than a phonetic representation of their specific pronunciation. The reason is that the syntax and grammar are more easily recognizable and maintain the needed clarity. Here's how David Foster Wallace put it in "Authority and American Usage":

Fact: There are all sorts of cultural/geographical dialects of American English—Black English, Latino English, Rural Southern, Urban Southern, Standard Upper-Midwest, Maine Yankee, East-Texas Bayou, Boston Blue-Collar, on and on. Everybody knows this. What not everyone knows […] is that many of these non-[standard written English]-type dialects have their own highly developed and internally consistent grammars.

Use these syntactical and grammatical rules to your advantage, but be sure you know those rules before you proceed. For example, if you're using the African-American dialect of English, you need to be aware that the "He be verb-ing" construction should only be used for ongoing or habitual behaviors. If you're using a Southern U.S. dialect, you need to know that "y'all" is typically used when talking to two or three people while "all y'all" is generally used when talking to more. Take the time to research and understand the internal rules of the dialect before you move forward.

I mentioned that I wouldn't spell out the way residents of my hometown pronounce "mountains." What I'd do to give a sense of Utah Valley's bizarre vernacular is work in some regional idioms, colloquial expressions, and habitual phrases. Because, oh my gosh, the way people talk there makes for one heck of a strange dialect.

These regional cues clue readers in to the Utah Valley dialect without creating confusion. Likewise, "Y'all can just hush" clues us in to a southern dialect, while "Aye, he's my wee brother" tells us that we're now working with Scottish.

But be wary of the false clichés of a dialect. I've spent about a year, all tallied, in England. Never once has someone said, "Watsat, guvna?" to me. Check in with an actual speaker of the dialect to make sure you're using the correct phrases in the correct way and with appropriate frequency. Don't know someone who speaks the dialect? You have the internet. Go use it.

The most important and most difficult element of a dialect is found in the rhythm of the character's voice. If you capture that cadence, it'll go a long way toward showing the character's unique sound. Simultaneously, you'll be imbuing your text with flavor, richness, variety, and linguistic pacing that benefits your readers.

But how can you capture the rhythm of an Irish accent? How can you tune in to the tumbling rolls of the Scottish brogue? How can you find that meandering stroll of the Southern accent? My advice comes back to the internet: We live in an era of vlogs and podcasts. Find a broadcaster who speaks in the dialect you're looking to mimic, then listen to the rhythm of their voice until it gets stuck in your head like an annoying pop song.

6. Describe the qualities of the voice separately.

Grandpa has this sort of voice that’s maple bark—rough, but holding all kinds of sweetness.

Her way of chirping out words in rapid, rhythmic bursts made her sound at once frenzied and musical; each sentence was a symphony orchestra on meth.

Whether you say a voice drips slow and sweet, like thick molasses, or is fast and wild, like a roller-coaster of sound, your description will do far more than just show off the voice of a speaker: You'll be characterizing your point-of-view character, showing their view of the character they're describing, and giving a sense of how the point-of-view character relates to the emotional spectrum and regional dialect the speaking character's voice represents.

When I spoke with actor David Suchet about his process for understanding a character, he emphasized the importance of voice. He told me that the person's sound was the root of their persona—and, indeed, the word per-son-a stems from the same root as "sonar," and is a reference to the individual's unique sound. The individuality of a voice is so strong that it underlies the U.S. government's voice-printing databases, which will be used (we hope) to identify criminals based only on brief snippets of recorded conversations.

In trying to develop the sound of each character, their dialect shouldn't be ignored. However, writers must either use a careful approach or invite disaster. By following the six tips above, you'll dodge some of the bigger freight trains. Know of other mistakes we should avoid? Share your thoughts in the comments, below.

Joshua Chaplinsky from New York is reading a lot more during the quarantine May 15, 2013 - 1:26pm

How do you feel about Irvine Welsh's use of phonetics? It's tough going at first, but you get used to it, and it's become one of his trademarks.

@Josh: I haven't read Welsh yet, but Trainspotting is high on my "to read" list. I'll let you know once I have an informed opinion.

I'm working on a project that takes place in 1930s Appalachia. Been trying to figure out the language to use in dialogue, so this is a big help. One of the things I was trying to avoid was an overwhelming, confusing phonetic mess. After reading Their Eyes Were Watching God, I thought my brain had melted. The story itself is wonderful, but the phonetically spelled words is a migraine waiting to happen. As always, Rob, great post.

Wait... You talked to Poirot?

Oh, and thank you for pointing out 3, 4 and 5. I tend to find just focusing on those does more for writing a dialect than all the phonetic shennanigans in the world...

Courtney from the Midwest is reading Monkey: A Journey to the West and a thousand college textbooks May 16, 2013 - 8:20pm

SammyB, I didn't have any of those problems with TEWWG! Weird. I loved the way it was done; I thought it added a sort of clarity that I wouldn't have had otherwise. It made me honestly hear the voice, which gave more insight into the story than I'd had in any other case.

Courtney, maybe it was because I read it during a summer semester in college and it was the last text we read. Sometimes I sort of struggle with motivation in those circumstances, so I should probably re-read it when I have time to just enjoy it.

"I haven't read Welsh yet, but Trainspotting is high on my "to read" list. I'll let you know once I have an informed opinion."

Guess now you have, and he really breaks your second rule. But it works! I'm not a native English speaker, so maybe it works differently for me, but I really get into it, to the point where I start speaking Scottish to myself. In everyday situations, not just while reading Irvine Welsh...