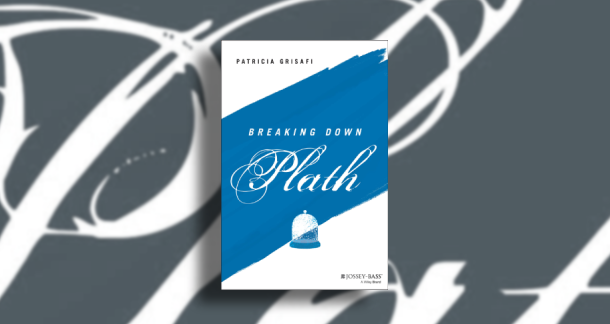 In Ten Things I Hate About You, protagonist Kat Stratford sits in a plush armchair, reading a comically large copy of Sylvia Plath’s novel The Bell Jar. The subtext is obvious: here’s a girl who is done giving fucks.

Throughout the film, Kat grapples with the patriarchal bullshit that all nerdy, bookish girls deal with in high school — with Sylvia as an unspoken guiding muse. I was grateful for this goofy but endearing movie because I also walked around high school wielding The Bell Jar like a warning.

But in high school, we didn’t learn about Sylvia Plath — not really. Even at an all-girls’ academy, we read mostly about men: what they wrote, who they killed, what important empires they built and crumbled. When we read Walden, no one told me Thoreau’s mom did his laundry and brought him sandwiches. (Did she cut the crusts off? I bet she did!) He was presented like a solitary genius living epically and brilliantly in nature.

We read one poem by Sylvia Plath, “Mirror,” and it was fine. We moved on.

To find Plath on your own in the 90s meant to know she died in the kitchen and then work backwards. Surf the web. Find a GeoCities webpage with wonky formatting. Go to the library. Read biographies that strangely feel like butcherings, like you’re not getting the whole story. Order a tape recorded reading on eBay and wait for the mail to hear her voice haunt you from the speakers of an Aiwa stereo.

Now, Sylvia Plath is everywhere. I’ve even written a book about her: Breaking Down Plath, so that young people might have a resource that I didn’t. In many ways, it’s the book I wish I had in high school when I was sulking around the library and the Paramus, New Jersey Barnes & Noble.

Plath is not a “phase” in one’s life, as I was told. To distill her life to her suicide is to ignore most of it.

However, we still treat teenagers like their interests and passions are amusing instead of existence-altering. And part of why I wrote Breaking Down Plath was to introduce middle and high school students to Sylvia’s work and tell them why she matters — and why they matter. Because Plath is not a “phase” in one’s life, as I was told. To distill her life to her suicide is to ignore most of it. To demean her work as a phase teenagers go through is to insult both the work and the teenagers.

The story we tell about Sylvia Plath is changing. She is still the patron saint of dysfunctional girls — and I’d never want to take that away because we need her, and what’s wrong with a little dysfunction? Thankfully, though, because of groundbreaking work, wider audiences now know she is much more than that.

Plath scholars have benefited from cultural shifts, a liberated estate, and increased availability of archival materials that help fill in the gaps of the Plath narrative. When we teach Plath, we teach her in context. Growing up during WWII and the Cold War, Plath was a product of her time in the ways she resisted the dominant narrative and conformed to it. As a woman, she participated in the culture while questioning and often outright railing against it.

The most obvious way Plath transgressed was through her writing and in her pursuit of a life that focused on writing. At a time when women of her social class were only supposed to marry, stay at home, and raise children, Plath left America in search of an exceptional and unconventional life. In many ways, she succeeded.

This is the story I wanted to tell teenagers of Plath, that of a highly capable woman facing struggles relatable to many of us: financial hardships, loss of a loved one, feelings of alienation, mental illness, relationship struggles, anxiety about war, and so much more. She was extraordinary because of her ability to articulate those experiences and make meaning out of them that transcended the personal and became collective.

When I began to write Breaking Down Plath, the world was entrenched in the COVID-19 pandemic. In my small apartment in the East Village, I entertained an extremely active toddler, stuck myself with needles for IVF treatment, and worked with my husband at the kitchen table. Books became towers. My son took a red pen to The Collected Poems, which sported a disintegrating spine from years of love. Pages blew around like the Wild West. We opened the windows at 7 pm to cheer and clap for essential workers. When winter came, I felt it.

I kept imagining myself as a translator instead of a writer, trying to tell Plath’s story in a new way specifically for an underestimated audience. But over the course of those bleary months, I was also writing back to myself as a teenager.

“Hey,” I thought with compassion instead of disdain like my therapist would want. “Remember when you carried Sylvia Plath’s books around like they were accessories? Because you were shy and depressed and hoped someone would see them and see you? She was so important to you. She got you through shit. She inspired you to use words. And you want to share that with other people.”

“School is a battlefield for your heart,” says Angela Chase, another iconic 90s protagonist who would have totally discovered Sylvia Plath if My So-Called Life got a second season. And while it’s been a long time since I cried alone in the library during lunchtime while reading Ariel, I know Plath still has so much to say to the kids. I hope I’m a good messenger.

Get Breaking Down Plath at Bookshop or Amazon

Patricia Grisafi, Ph.D., is a freelance writer and editor. Her work has been featured in The Guardian, Salon, Vice, LARB, Catapult, SELF, Narratively, The Rumpus, and elsewhere. She is the author of Breaking Down Plath. She lives in New York City with her husband, son and daughter, and two rescue pit bulls.

There are many options for a play kids geometry programs. Those that are modular are divided into tile-like shapes and may be puzzle-like. They may also have pop-out pieces that will encourage baby's fine-motor skills. Others may fold up when not in use. Whatever the case, a play math can make the transition from nursery to toddlerhood easier. Here are a few things to consider when buying a play math for kids:

When I was a teenager, my best friend and I were both really into Sylvia Plath. We read her poetry and carried around copies of her books, but we didn't really understand why she was so important. We just knew that she spoke to us in some way that no one else could — or at least no one else was willing to acknowledge. Now I want to check edubirdie price so that I could manage funds to hire an expert writer from there to get help with my coursework.

On best essay writing sites, users will be able to learn more on Do It For The Kids: I Wrote A Book On Sylvia Plath That I Wish I Had As A Teenager as that was the caption that might interest you as well. We all can hope that this was the one you will see and talk about if you will need that.

Do It For The Kids: I Wrote A Book On Sylvia Plath That I Wish I Had As A Teenager is the caption that you can see and there are a few details that you would like to learn about the topic that is being addressed so try https://www.dissertation-service.org/political-science-dissertation/ this time.

If you are using this powerful tool for kids then this page will be of great use to you kindergarten homework help is easily available on this page. Nowadays students get very upset while writing essay. The solution to their problem will be found in cause and effect writing prompts. Visit this website Some of my students have also improved their writing skills with the help of this.