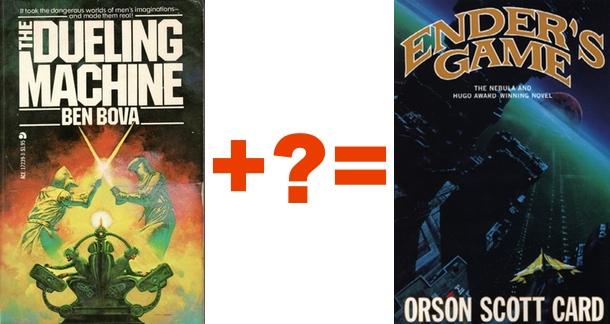 At one of my weekly writer’s group meetings, a friend gave me an old first edition of a science fiction novel called The Dueling Machine, by Ben Bova. This isn’t unusual; we pass books back and forth quite often. But this time, my friend leaned in close, and in a conspiratorial voice he said, “I have it on good authority that Orson Scott Card ripped off the ideas in this book when he wrote Ender’s Game.”

These sorts of legends are common among bibliophiles; we love the juicy backstory about a book and its author as much as or more than the book itself. Every time a book changes hands, a little bit of information goes along with it. Sometimes it’s a recommendation, or a synopsis, or a piece of lore. Sometimes it’s an outright lie. As someone who appreciates both Ender’s Game and old 1960s sci-fi, I thought this was the perfect opportunity for some literary sleuthing.

Creativity isn’t about the purity or originality of ideas, it’s about putting them together well and acknowledging influences.

I dove into The Dueling Machine, intent on flagging all the potential similarities. Now that I’ve thoroughly combed through the book, guess how many flags I have hanging out of its edges…

Just two, and one of them is a broad note that the book is about war.

Here’s a quick synopsis of The Dueling Machine (I’ll assume that anyone who cares already knows the plot of Ender’s Game):

In the far future, humans (no aliens here) have split the galaxy into large empires. A genius named Dr. Leoh invents a “dueling machine” that allows two people to simultaneously occupy a dreamlike state where they can interact in worlds restricted only by their imagination. What’s the first thing people think to do with this wonderful new device? They settle petty disputes through duels. The device is used as a psychological weapon and then a real weapon by an antagonistic empire that doesn’t yet have the military means to conquer its neighbors. Eventually, the device is also discovered to be an intergalactic transporter. (It was the 60s, guys, so who says a holodeck-in-your-head can’t also transport you across millions of light-years instantaneously? Besides, your iPhone can send emails AND play Candy Crush. Same thing.) Dr. Leoh and a bumbling officer of the Star Watch (a police organization, not a celebrity magazine) manage to foil the plot to take over the galaxy. Oh, and the Star Watch officer ends up with the daughter of a political leader that was killed in the dueling machine.

Doesn’t seem too similar to Ender’s Game, right? That’s because it’s not. In fact, given that the dueling machine technology allows one duelist to host the other duelist inside his dream, you’d have an easier time arguing that Christopher Nolan ripped off the idea for Inception from this book.

Playing ball in zero gee with four other cadets, floating in the huge, metal-ribbed, spheroidal gym, laughing, trying to toss the ball without flipping yourself into a weightless tumble.

Now that, at least, sounds familiar. It’s easy to see how someone could read that line and think Card was inspired by this idea when he wrote about the zero-gee combat exercises in Battle School. But here’s the important question: So what?

Card has already talked about where the idea of Battle School came from, and it wasn’t this book; but even if Card did read The Dueling Machine and decided to make a whole book based on this one idea, then he should be praised. He didn’t rip anything off; he took an idea (which wasn’t exclusive to The Dueling Machine, in the first place) and expanded it into something relatively unique and insightful. That’s not thievery; it’s not plagiarism; that’s creativity.

We have a societal conception of creativity as a skill that lets us yank wholly original ideas from the ether, unencumbered by what has come before. But nothing could be further from the truth. Everything you are and everything you create is a conglomeration of your experiences, particularly so in our modern era that's saturated with media.

There’s a principle called combinatorial creativity, exemplified by the quote “Good artists copy; great artists steal” (variously attributed to Picasso and a few others). If you haven’t heard of combinatorial creativity before, you must immediately watch a series of videos called Everything is a Remix. Then head over to Austin Kleon’s site and watch a video primer of his book, which teaches a similar principle. And if you need a vivid and astonishing example of how our environment influences our creativity, look no further than Derren Brown’s experiment with a couple of advertising experts.

So in this context, Ender’s Game is no more a ripoff of The Dueling Machine than it is of Star Wars or Starship Troopers, which share some similarities with Card’s book and could have been influences. In all likelihood, Orson Scott Card himself probably couldn’t name all the overt and subliminal influences on his work. No writer can.

So why are people so eager to find evidence of plagiarism?

Two reasons: First, outright plagiarism does happen; nothing angers people more than feeling duped. And second, we love forming connections to things we have experienced. We want to be the one who notices something is awry.

But combinatorial creativity and the very nature of storytelling make this a dangerous game to play. Plenty of people have pointed out that there are only seven kinds of plots, or that every story is a retelling of the Hero's Journey. On some level, any book can feel like a ripoff. One of the best examples of this principle was given by Orson Scott Card himself. When J.K. Rowling sued another author over a perceived copyright infringement (something she was accused of fairly often herself), Card wrote a scathing response wherein he pointed out that, from a certain point of view, The Harry Potter books could be seen as a ripoff of Ender’s Game:

A young kid growing up in an oppressive family situation suddenly learns that he is one of a special class of children with special abilities, who are to be educated in a remote training facility where student life is dominated by an intense game played by teams flying in midair, at which this kid turns out to be exceptionally talented and a natural leader. He trains other kids in unauthorized extra sessions, which enrages his enemies, who attack him with the intention of killing him; but he is protected by his loyal, brilliant friends and gains strength from the love of some of his family members. He is given special guidance by an older man of legendary accomplishments who previously kept the enemy at bay. He goes on to become the crucial figure in a struggle against an unseen enemy who threatens the whole world.

There are a few more interesting points in Card’s article, but be warned, the longer it goes on, the deeper it dives into ranting and frothing at the mouth. Regardless, the underlying principle behind his comparison is sound. Everything owes some debt to what has come before. In fact, we have entire genres based on the idea. Think of the parody, the mashup, the remix, the homage, the allusion. And let’s not even get into the legal gray area that is fan fiction.

This makes plagiarism, except in the most obvious word-for-word cases, really hard to prove. Is it theft, admiration, an artifact of the medium, or just plain coincidence? Sure, you had an awesome idea about hyper-intelligent slugs controlling an intergalactic drug trade, but you can’t necessarily claim theft when some other person writes an eerily similar story. It’s entirely possible you were both high while watching the Jabba’s Palace scene from Star Wars: Return of the Jedi and had what seemed at the time to be a mind-blowing epiphany. How do you prove who thought of it first? And does it even matter who thought of it first?

The Real Definition of Creativity

This idea is a bit scary because it seems like we’re saying there are no original ideas. There’s nothing more demoralizing as a creator than to discover your ideas aren’t your own. But we also can’t go the other direction and claim the right to put our name on any thinly disguised reproduction of our favorite story.

The real thing we should be looking for is how an author (or director, artist, actor, etc.) uses ideas. In other words, creativity isn’t about the purity or originality of ideas, it’s about putting them together well and acknowledging influences (to the public and to ourselves).

Say it with me: Creativity isn’t about ideas; it’s about execution.

So, no, Ender’s Game is not a ripoff of The Dueling Machine, but it is a great book. Yes, it incorporates plenty of ideas that have long pedigrees in both science fiction and fiction in general, but it composes those ideas into a wonderful story that has serious staying power. What more could you want from a book?

What do you think? Where's the line between inspiration and plagiarism?

I like the Harry Potter comparrison - I've read both books but I simply never thought of that. Ender's Game has far deeper ideas in it though, so I guess it's a perfect example of how an idea that in some ways seems the same can be expanded into something that goes in an entirely different direction. I'll happily say it with you: 'Creativity isn’t about ideas; it’s about execution.'

'Did Ender's Game Rip Off The Dueling Machine?'

OF COURSE HE DID IT!

I found the Trojan Horse by Hammond Innes at a hostel when travelling, raining outside so I stayed in and read the whole thing in one sitting. The story struck me as awfully familiar, after thinking about it I realised the premise was quite similar to Timothy Zahn's The Icarus Hunt.

Hard to know if he liked the idea and took it, or just remembered it and used it subconciously. Could even be a coincidence, but it's only the barest skeleton of the plot that's similar. It's done well enough that even if he did it knowingly, I don't think it's a problem.