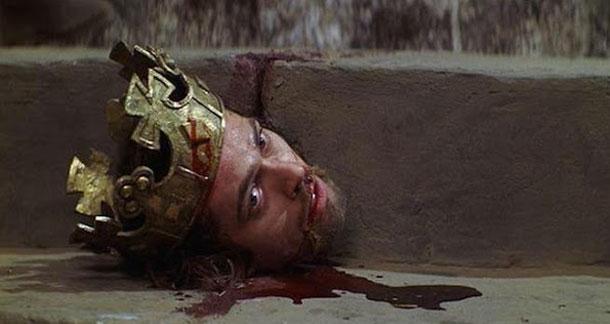 Most of the time proper literature deals with death, it is presented as a beautiful thing: a knight's brave sacrifice, a lover's romantic suicide, an old person's fond farewell. But this spooktacular time of year pulled my focus towards another kind of literary death. You know, those dark and dastardly acts that run the bloodthirsty gamut from spine-tingling to gut-churning.

In the spirit of the season, I've assembled what I believe to be seven of the most memorable and disturbing acts of homicide in literature. Think of it as a "Best Kills Supercut," but, like, for the Western cannon.

Obviously, this list is incomplete - despite my best efforts I have yet to read all of the books, ever. I chose the moments that stuck out to me as especially gruesome, shocking, or haunting. So be warned, there is a lot of disturbing imagery to follow - because when highbrow types go dark, they go all the way. (And, necessarily, this article contains SPOILERS. If you don't want to know what happens to Piggy at the end of Lord Of The Flies, STOP READING NOW.) 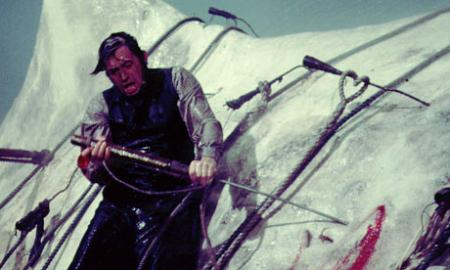 The finale of Melville's great book and the spermaceti harvest about halfway through are basically tied for Most Disturbing Whale-Based Scene. But despite the latter's massive amount of headwax, the climax had to win out. Ahab finally harpoons the white whale that has become his most consuming obsession and destroyed his life. Alas, the Captain's victory is short-lived, as the mortally wounded beast seems to know that the spear in its side is still connected to its aggressor:

"...[T]he stricken whale flew forward; with igniting velocity the line ran through the groove; - ran foul. Ahab stooped to clear it; and he did clear it; but the flying turn caught him round the neck, and voicelessly as Turkish mutes bowstring their victims, he was shot out of the boat, ere the crew knew he was gone."

If you've gotta go, you might as well get pulled to the bottom of the ocean by the 19th century's biggest allegorical wang, right? 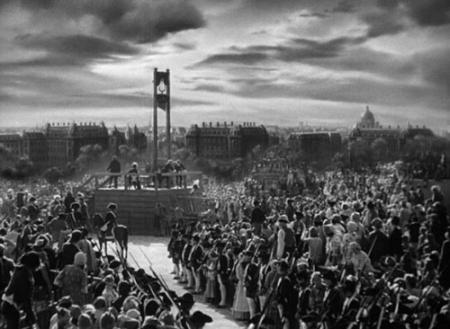 A TALE OF TWO CITIES by Charles Dickens

Good ol' Chuck D's novel of the French Revolution is chock full of strained bodices and severed heads. And while his account of the blood-soaked Reign of Terror ends with the memorably poetic death of Sydney Carton, it's this earlier description of a populace obsessed with their Guillotines that stuck in my mind:

"It was the popular theme for jests; it was the best cure for headache, it infallibly prevented the hair from turning grey, it imparted a peculiar delicacy to the complexion, it was the National Razor which shaved close: who kissed La Guillotine, looked through the little window and sneezed into the sack...It sheared off heads so many, that it, and the ground it most polluted, were a rotten red."

I think I speak for us all when I say this: Ick. 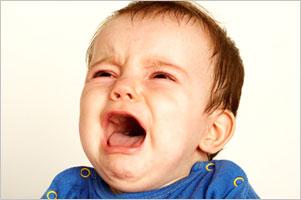 The author of The Road and No Country For Old Men is no stranger to dark and disturbing acts. But this novel from 1968 trumps the rest of McCarthy's oeuvre - and might confront more taboos than any other book, ever. First the main character rapes his sister, then she gets pregnant, then he tries to kill the baby. And if that wasn't bad enough, he's followed by three horrible men who commit numerous gruesome atrocities, including murder, rape, and, well, this:

"The mute one knelt forward. He was drooling and making little whimpering noises in his throat …The man handed him the child and he seized it up, looked once at Holme with witless eyes, and buried his moaning face in its throat.”

That's a man eating a baby, everyone. And you wonder why Hollywood hasn't been in a rush to adapt this particular McCarthy novel for the screen... 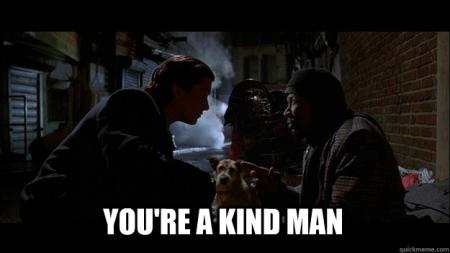 While it is notorious for its in depth descriptions of serial murder, this book's stomach-turning capabilities might actually be underrated. I remember reading it in public and thinking that if someone innocently glanced at a page over my shoulder, I would get arrested immediately. Don't believe me? Check out this horrifying passage from early in the story, when protagonist Patrick Bateman confronts a homeless man:

"...I pull out a long, thin knife with a serrated edge and, being very careful not to kill him, push maybe half an inch of the blade into his right eye, flicking the handle up, instantly popping the retina....His eye, burst open, hangs out of its socket and runs down his face and he keeps blinking which causes what’s left of it inside the wound to pour out like red, veiny egg yolk. I grab his head with one hand and push it back and then with my thumb and forefinger hold the other eye open and bring the knife up and push the tip of it into the socket, first breaking its protective film so the socket fills with blood, then slitting the eyeball open sideways, and he finally starts screaming once I slit his nose in two..."

I hope you didn't eat eggs this morning. Or anything, actually. 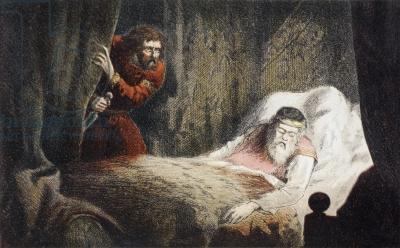 This raucous tale of warfare between Scottish clans has long stood as one of the Bard's bloodiest, darkest plays. And while most of the murders occur off-stage, the victims' blood is virtually omnipresent as a physical manifestation of the guilt the characters feel over their transgressions. Unsurprisingly, Shakespeare manages to make the descriptions of the scene of a crime sound almost beautiful, such as when Duncan's body is discovered by his servants:

"His silver skin laced with his golden blood;
And his gash'd stabs look'd like a breach in nature
For ruin's wasteful entrance: there, the murderers,
Steep'd in the colours of their trade, their daggers
Unmannerly breech'd with gore:..."

Not exactly "shall I compare thee to a summer's day," huh? 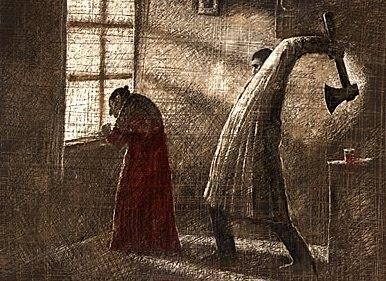 CRIME AND PUNISHMENT by Fyodor Dostoyevsky

This Russian classic features one of the most famous murders in modern literature. And certainly its author was no stranger to tough locals, as Dostoyevsky had a long history of drinking and gambling amid bouts of inspired writing. Indeed, the titular "crime" - the student Raskolnikov's assault with an axe on a female pawnbroker - remains viscerally disturbing some 145 years after it was published:

"He pulled the axe quite out, swung it with both arms, scarcely conscious of himself, and almost without effort, almost mechanically, brought the blunt side down on her head...As she was so short, the blow fell on the very top of her skull. She cried out, but very faintly, and suddenly sank all of a heap on the floor, raising her hands to her head...Then he dealt her another and another blow with the blunt side and on the same spot. The blood gushed as from an overturned glass, the body fell back. He stepped back, let it fall, and at once bent over her face; she was dead. Her eyes seemed to be staring out of their sockets, the brow and the whole face were drawn and contorted convulsively."

I know there's a joke to be made about using the wrong side of the axe, but I'm too grossed out to make it. 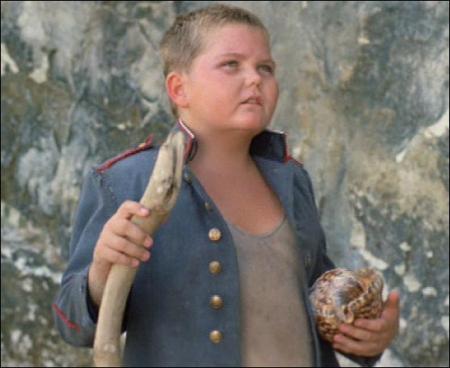 LORD OF THE FLIES by William Golding

This classic has been freaking out middle schoolers who read it in class for over 50 years. As a group of English schoolboys marooned on an island renounce "civilized" behavior in favor of more primal urges, they do all sorts of terrible things to one another. But nothing is as horrible - or macabre - as this description of the evil Roger pushing a boulder onto the outcast boy known as Piggy:

"The rock struck Piggy a glancing blow from chin to knee; the conch exploded into a thousand white fragments and ceased to exist. Piggy, saying nothing, with no time for even a grunt, traveled through the air sideways from the rock, turning over as he went. The rock bounded twice and was lost in the forest. Piggy fell forty feet and landed on his back across the square red rock in the sea. His head opened and stuff came out and turned red. Piggy’s arms and legs twitched a bit, like a pig’s after it has been killed. Then the sea breathed again in a long, slow sigh, the water boiled white and pink over the rock; and when it went, sucking back again, the body of Piggy was gone."

It made me feels horrible then, and it still does today. Thanks a lot Mrs. Penniston's 7th grade English.

So how did I do? What great literary murders did I miss? Let me know in the comments!

A Storm of Swords by George R. R. Martin should certainly take a crack at this list.  Without giving up spoilers if you have read the book you will know what I mean.

Joshua Chaplinsky from New York is reading a lot more during the quarantine October 26, 2012 - 12:14pm

Agreed, although if we're talking about single kills, I'd say GoT.

My favorite  is The Tell - Tale Heart by Poe my little cousins would request it as a campfire story.

Dino Parenti from Los Angeles is reading Everything He Gets His Hands On October 26, 2012 - 3:08pm

I remember as a teenager reading Stephen King's Different Seasons. Now most are familiar with the three of the stories from it: Rita Hayworth and Shawshank Redemption, The Body (aka Stand By Me), and Apt Pupil. But the final story is the least known, and probably sports the goriest and most unsettling death I've read: SPOILER ALERT! When the main character, a single pregnant mother gets decapitated in a car accident, the man who loves her delivers the baby on the street with her severed head watching nearby--while La Mas breathing. Still creeps the shit out of me.

Dino Parenti from Los Angeles is reading Everything He Gets His Hands On October 26, 2012 - 3:09pm

Yes, I realize it's not a murder per se, but it sure worked like one.

Joshua Chaplinsky from New York is reading a lot more during the quarantine October 27, 2012 - 7:27am

@Dino: the best King adapts have come from that book, and they are finally (probably) making a film version of The Breathing Method.

Ned Stark's death in a Game of Thrones shook me to the core, primarily because it was a long saga and someone is introduced as a main and important character is dead with one sentence.  I didn't see it coming, not at all.

SarahElizabeth from Pennsylvania is reading All the Light We Cannot See; Monster July 27, 2013 - 4:42pm

I think the severed head at the top wigged me out more than anything. I find severed heads one of the creepiest things ever. Except ANYTHING being done to eyeballs. *Shudder*

Edgar Allan Poe's The Black Cat (1843) was the first piece of literature that came to mind when I read your question.

Although, it's more detailed about the "poor kitty." ...popping out the cat's eye, then killing his wife & hiding her, then finally hanging the cat...that short story is burned in my brain!