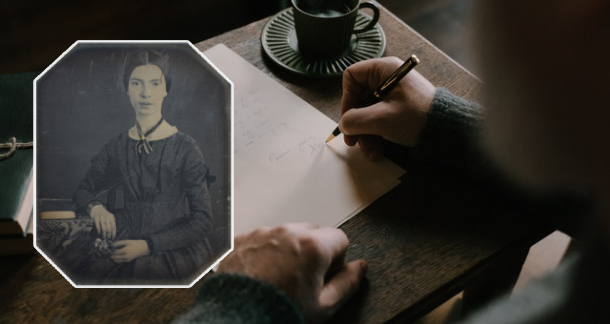 Most of what I know of you is haunted and that’s not fair. I have made you a specter in my head, the lady in white, the woman in the attic, the one I write letters to only to seal them in wax and set them on fire under the morning’s light. You were my introduction to the haunted house, the poison garden, the sound of pen on paper, and when I find myself wrapped in silence, stuck between this word and the next, I feel you behind me, your hand on my shoulder, the whisper of spirit and eternity tickling the nape of my neck.

I, too, grew up liking a look of agony. There’s something about tortured eyes that I find quite beautiful. Perhaps it’s the soul leaking out of the body, those brief moments of pain and memory interlocking to form a picture of the past. It’s why I prefer conversations by candlelight, secrets shared in dim rooms filled with soft music and served alongside tea. People are more fascinating in the dark because their shadows don’t have to hide. There’s a rawness present, a slice made in the veil.

You could not stop for death, and yet despite its hand, you remain alive in flowers, in dashes, in forgotten notes and tucked away promises...

It’s snowing as I write this, the roads covered in white blankets and sheets of ice. I tend to read your poems when frost taps on my window, their palette cold, their breath a welcomed chill, and I often picture a locked door in an endless hallway, a skeleton key buried beneath the skin of my palm. You are forgiveness and hope, a pool of absence, the sound of a bell, and when I walk through the cemetery, contemplating the distance the dead have traveled, I think of white coffins and turtledoves, the way “called back” was etched on your tombstone, your name a piece of mythology, a talisman, a feather falling from a storm-soaked sky.

Sometimes in the evening, I like to sew flower petals together, soak herbs in moon water and quartz. You adored nature, and I wish I had followed your path earlier in life, taking careful note of each blossom, caring for every bud, but I was a child when I saw my first ghost, her presence something I carry with me now in mirrors and silver spoons. She paces near my vanity, her black veil an attempt to hide the history in her bones, but I know what it means to be buried, to fold myself into closets and drawers, to conceal myself in sideway glances and second guesses. For a long time, I didn’t grow, my neck snapped, my legs broken, the woman’s presence a constant as she protected me from crueler fates like bleeding hearts and ruptured identities.

My grave became my cottage and I hardly left. Even now—especially now—the house is both tomb and sanctuary, the outside world a collection of disease that calls for more than one kind of mask. I gave up on people, slipped into the shadows as nothing but a name. I whispered through doors, waved through fogged glass, my silhouette a moving target rarely seen but impossible to ignore. Have I become the ghost that haunts these alabaster chambers? The one who peels wallpaper from the ceiling, creates portals from the holes in my body? I am an amalgamation of alchemy and curses, my sight aligned with the buzzing of a fly that’s trapped between the window panes, each movement a waltz, the sound of a black carriage wheezing as it arrives.

But you could not stop for death, and yet despite its hand, you remain alive in flowers, in dashes, in forgotten notes and tucked away promises, black cakes and cherry blossoms, in the quiet rituals that accompany true friendship. I think of you often, classic and chic, your eyes alight with the wonderment and science of the world around you. When summer comes, I’ll hear you in the creek, feel you in the dandelions and the jasmine-scented breeze, but for now, I’ll make snow angels on the roof, slip messages under the door, the bite of winter a welcomed pain because it lets me know I’m alive.

Get These Fevered Days: Ten Pivotal Moments in the Making of Emily Dickinson at Bookshop or Amazon

Get The Poems of Emily Dickinson: Reading Edition at Bookshop or Amazon

11 Authors Who Became Famous After They Died

She paces near my vanity, her black veil an attempt to hide the history in her bones, but I know what it means to be buried, to fold myself into closets and drawers, to conceal myself in sideway glances and second guesses. For a long time, I didn’t grow, my neck snapped, my legs broken, the woman’s presence a constant as she protected me from crueler fates like bleeding hearts and ruptured identities. loginjet.net

A balance in life is also important but when a good game will come in life as applob apk then you can spend more balance life. For sure, life is much precious and everyone want some positive changing in it.

DO YOU PLAY LOTTERY??

My name is James M. Mason, If you want a spell to win the lottery, look no further. Dr. Lucas lottery spell is amongst the most powerful spells I have experienced, and you will feel the power once He is done with your lottery spell.

The spell uses a wide range of magical sources, then combines and funnels those energies into one single "beam" of luck attracting, destiny controlling, wealth manifesting pure magical power.

Incorporating herbs, candles, the elements and much more simple magical techniques, this spell can be cast in a few minutes using a few very simple ingredients in His temple.

I am a living witness of his power because he just helped me with his lottery spell and I won CASH FOR LIFE LOTTERY, I'm so happy right now. Thanks to you Dr. Lucas. Contact him for help through his Email:  miraculouscentre@gmail.com  Or  through his Website: https://miraculouscentre.wixsite.com/my-site-1  You can also message Him through his private What's App Number +15302120104. Facebook Page  https://web.facebook.com/miraculouscentre

Whichever type of lottery you play, HE can use His lottery spell to help you win. https://jamesmmason05.blogspot.com/

Greetings, Emily Dickinson. It's unfair that most of what I know about you is haunted. The woman in white, you are a specter in my thoughts.

Good web site you have got here.. It’s hard to find high-quality writing like yours nowadays. pg slot I really appreciate
people like you! Take care!!

i like your writing Easy to understand, I hope you will visit my website. slotgxy888 <a href="https://www.slotgxy888.com">pg slot</a>