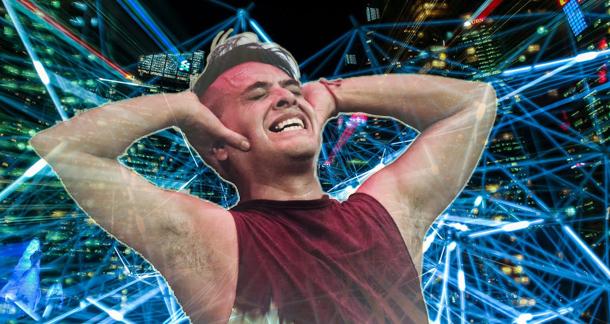 KillerCon was held in Austin at the end of August. It was a superb conference and hardcore horror legend Wrath James White did a fantastic job. I had a blast that weekend. I did a reading, was on a few panels, and got to hang out with some of my favorite people.

One of the panels I participated in was about working around dumb horror tropes. The panel was solid (it featured Jeff Burke, Matt Shaw, Shane McKenzie, Lucy Taylor, and yours truly). However, the part of that stuck with me happened during the discussion at the end. We somehow ended up talking about tropes in horror movies, and technology came up. I have passionate ideas about movies that I never share because I've learned many people care more about the movies they like than their own families. In any case, I've always felt that technology was either completely ignored (one of the reasons, as Jeff Burke pointed out, why so many horror narratives are set in the 80s) or used as a silly prop. Those ten minutes of heated discussion resonated with me and left me thinking. In the following weeks, I watched a bunch of horror movies in which technology played a role. They mostly sucked. It only made me think about tech in horror even more.

If you are being followed by a creepy guy with a machete, calling a few friends to fuck him up is an easy option.

Here's the thing: I teach high school, and the idea of a young person without a cell phone is as bizarre to me as a bigot with a heart of gold. We are on our phones all the time. Younger generations live on their phones. They have more than one charger. They are hyperconnected.

Once you understand that truth, any narrative that breaks away from it immediately shatters your suspension of disbelief. To me, that is easy to understand. However, there are tons of movies in which phones and things like GPS technology are ignored. They are ignored almost as if bringing them into the equation would mean the obliteration of the narrative. Why is that? Well, I think one reason is that those writing horror stories usually equate isolation with horror. You can be scared surrounded by people, but it's easier to be scared when you're alone in the basement. Yeah, that's probably a reason, but a reason is not an excuse.

The second reason why technology is ignored is probably that it represents a hurdle for the slasher or monster or whatever. If you are being followed by a creepy guy with a machete, calling a few friends to fuck him up is an easy option. Or, you know, dialing 911 could also work. The same goes for those pesky groups of youngsters that get lost in the woods or in small towns all the time: just pull out your phone and consult Google maps. There, sorry for ruining your movie and saving a dozen young lives in the process.

In all seriousness, there is something silly about the fact that all the movies I watched where technology plays a major role, the tech is the evil thing. I'm tired of that. I get it: social media is bad. I also know that humans are monsters, so I don't need thirty more painfully slow art house horror movies driving that point home. What I do need is something new. Give me narratives where technology exists and is used, but it doesn't matter. Give me movies where people dial the cops the second they find Becky or Tommy with their intestines looped around their throats. What happens after that call is up to you. Give me a dose of truth, and that will help me believe your story, identify with your characters, and enjoy it much, much more.

Technology is always with us. If you want to take it out of the equation, you have three options:

No, seriously. I recently watched Apostle and dug the hell out of it.

Make your characters have a little accident while kayaking. The phones are all lost. Or give me some of that good post apocalyptic mayhem where the power grid collapses and we're all screwed, running around in the dark as we escape from giant mutated cockroaches. I love that stuff.

3. Use it then show me why it's still useless.

A demon doesn't care if the cops show up. Nah, he possesses the guy with the shotgun and takes everyone out. Or, if you don't like that, use it and make it be somewhat useful. The cops show up, but they're too late. Your homies show up, but none of them have the guts to fight the creepy dude with the machete. The possibilities are endless.

Every storyteller has to find a way of making his/her story work. However, they also have to keep in mind that it needs to work for the audience. It's time to abandon this nonsense of no technology. It's crap and y'all know it. Also, your movie about a killer app...well, better make it a comedy because they are all awful and we're tired of them. Now pull out your phone and text someone some ideas. Let's get out of this stage together, shall we? Drop me an email or text if you need some help. You can also find me on Twitter, Facebook, Instagram...