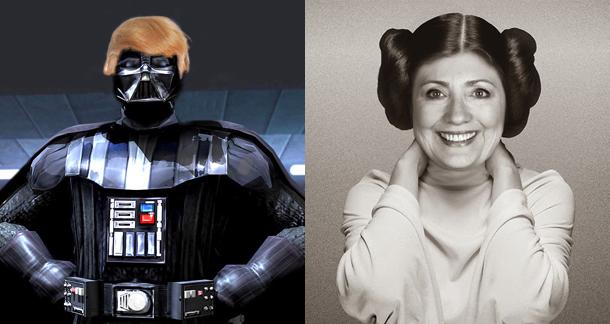 This election year is a memorable one. With the Republican National Convention proving that politicians can indeed stoop to new lows and the Democratic National Convention demonstrating that the Left would rather bicker than unite, it’s looking like the next few months will be for the record books. They already are with Hillary Clinton as the first female major-party candidate for president in history, regardless of if she wins. With that context in mind, it’s fascinating to consider Claudia Gray’s impetus when writing Star Wars: Bloodline.

Released on May 3, the novel follows Princess and Senator Leia Organa just six years before the events of The Force Awakens, and wouldn’t you know it the plot concerns her running for “First Senator”, the Galaxy Far, Far Away’s presidential equivalent. But such an emphasis on politics can’t help but bring to mind three movies that most thought Disney hoped to distance itself from with this property.

Luckily Gray’s take on the New Republic’s Senate floor is fresh and insightful, and has something to say about the current state of politics as well as what George Lucas was commenting on with his prequel trilogy of films released between 1999 and 2005. Whereas Gray has over a decade of political paradigm shifts to engage with, Lucas has emphasized time after time that his entire Star Wars Saga was mapped out back in the 1970s. Per that insistence, The Phantom Menace is surprisingly prescient for its foresight while Attack of the Clones’ and Revenge of the Sith’s seeming reaction to 9/11 and the War on Terror must just be a coincidence. 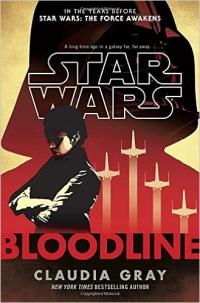 Or not, considering there was no way to avoid weaving such commentary into a politically-charged screed like the prequels, and the same is true of Gray with Star Wars: Bloodline. So keeping that in mind, parsing out the text will reveal an author not-so-subtly critiquing the current state of politics while being of a piece with previous iterations of the franchise that had all but been dismissed by fandom. In a way she legitimizes the prequels’ insistence on focusing on interminable senatorial debates, while managing to take the same material and make it exciting.

She also does something amazing with the disparate elements of Leia that have been scattered across many movies and books these past three decades, and manages to craft a three-dimensional character. In that way this trumps anything done with the character in the previous expanded universe. It also has the monumental task of dramatizing the midlife crisis of a former monarch turned politician, and still succeeds in making her relatable and distinctly Leia. No one has captured her worshipfulness like Gray since Lawrence Kasdan in The Empire Strikes Back, and maybe no one will again.

Claudia Gray is the pseudonym of Amy Vincent, a writer mostly known for her vampire and witch Young Adult novels like the Evernight and Spellcaster series. First published in 2008, along with the Firebird trilogy’s science fiction bent she also wrote Star Wars: Lost Stars, a 2015 YA novel that was part of the Journey to Star Wars: The Force Awakens publishing initiative. Although these things certainly have nebulous definitions, Bloodline is, in fact, her first published non-YA novel. As such, it deals with heavier and more complex issues than her pedigree, although it never forgets to bring the fun.

In that way she’s in stark contrast to Star Wars creator George Lucas, who was criticized for his new movies focusing on elements that distanced them greatly from the originals in terms of tone and concern.

Consider the original 1977 Star Wars in which the dissolving of the Imperial Senate, and their replacement with Moffs as iron-fisted governors, is mentioned offhandedly. There’s a zippy pace and emphasis on lower class in the original Star Wars trilogy that the prequels are diametrically at odds with, with their focus on politicians, royalty and knights in high towers. Luke is a farm boy, Han is a criminal and Leia immediately loses her station when her home planet is destroyed.

The prequels attempt tragedy as they show how the mighty fall, both institutions of government in the Old Republic and the Jedi and in people with Anakin Skywalker. But Lucas struggles to dramatize these ideas with stiff dialogue and clunky plot machinations. Something that J.J. Abrams understood with The Force Awakens is the original movies are always moving, always pushing forward, whereas the prequels are thematically and literally about stagnation.

Lucas’s initial Star Wars outline was inspired by the zeitgeist of distrust and dissolution in his youth. As he explained in a 2005 interview with the Chicago Tribune:

It was really about the Vietnam War, and that was the period where Nixon was trying to run for a [second] term, which got me to thinking historically about how do democracies get turned into dictatorships? Because the democracies aren’t overthrown; they’re given away.

Gray has a whole other exigency to respond to in 2016.

In the spotlight for 20 years, of course, has been Hillary Clinton. First as First Lady, then New York Senator and finally Secretary of State, she’s been positioning herself since 2008 to be the Democratic candidate for president. And in the other corner is Donald Trump, the Republican candidate that might as well be Senator Palpatine vying for the Chancellor position. Or in the parlance of the book itself, a Centrist jockeying for a stronger government and more powerful military in opposition to Leia’s Populist Party who favor a confederacy of sorts with planets retaining near full autonomy.

No one has captured her worshipfulness like Gray since Lawrence Kasdan in The Empire Strikes Back, and maybe no one will again.

And then there’s the controversy over Leia’s lineage, something that functions as a perhaps not one-to-one allegory for the Clinton email scandal while also putting the nail in the coffin of any prior EU portrayal of the character. For those that haven’t heard, and that seems impossible without having lived under a rock in a cave on Mars, the last year has seen Clinton accused of wrongdoing in relation to the night of September 11, 2012, the attack on the Benghazi embassy. Clinton, Secretary of State at the time, as it turns out had been using her own private email not sanctioned by the White House and may or may not have deleted information related to the attack.

This fact has been trotted out by the Republicans as a smoking gun ad nauseum, and Leia being the daughter of Darth Vader serves a similar function in the novel. At the height of her candidacy this fact is revealed on the Senate floor, and Leia immediately leaves the race. Of course, that’s now how things have happened with Clinton, but as previously stated it’s not a perfect mirror of reality.

It is, however, a kind of funhouse reflection of the previous EU. In that continuity, Leia succeeded Mon Mothma as Chief of State in Kevin J. Anderson’s Jedi Academy trilogy (1994). Set seven years after Return of the Jedi, it sees Leia ascend to the most powerful position in the galaxy after Mon Mothma is poisoned. She serves in the office for two terms with public knowledge of her heritage having no sway on public opinion, and years later after having left politics she trains as a Jedi. She becomes very powerful and is hinted to be a Master.

The new continuity, by contrast, is like a Venn diagram. Mon Mothma did serve as the first Chancellor of the New Republic, but in her absence the Senate has fallen into disarray. Leia never advanced beyond senator, and after a lifetime of serving longs to escape from politics. She dreams of hopping around the galaxy with Han, but that is put to rest when Ben Solo, soon to be Kylo Ren, destroys Luke’s new Jedi. Leia’s formation of the Resistance and jump back into the fray does coincide with prior attempts at characterization, but there’s more of an emotional honesty here. Leia admitting her priorities were never with the Jedi feels more authentic than, say, Tom Veitch depicting Leia as overly sentimental and strangely serene in his Dark Empire graphic novel.

What’s really the issue here is how powerful women are viewed. When it gets down to it, regardless of ethos, Donald Trump can get away with bellowing his speeches and smashing his fists down on podiums, and that means he’s a take-charge and steadfast leader. If Hillary Clinton, forever hounded by the press for her attire and destined to navigate being too feminine and not feminine enough, ever attempted anything like that she would be labeled a bitch. It’s no coincidence her polls skyrocketed back in 2008 when she was caught crying during a speech in a New Hampshire coffee shop.

Princess Leia is, similarly, a hard woman, and one writers struggle to nail down. Carrie Fisher played her with a fierceness, as written, but also endowed the woman with an inner pain and romanticism that makes for a well-rounded and multifaceted tapestry. So the freedom the old EU writers had to further her as a character often led to mishandling of her personality, voice and priorities. Too easy was it to maintain her as a politician, Jedi or even as a mother, but more often than not they fell back on old clichés and struggled to understand what made her tick. Perhaps the added benefit of knowing where Leia ends up in The Force Awakens gave Gray the confidence to imbue her with layers and conflict befitting a woman that has been fighting her whole life.

Bloodline, in the end, achieves a remarkable task. It manages to transcend its pulp, commercial tie-in elements and become a genuine character study. In the boy-centric world of Star Wars, across all mediums, Gray has pulled off a quiet book about a woman facing a turning point in her life, and accepting that perhaps her best days are behind her. The author also manages to weave Lucas’s perhaps ill-advised fixation on politics into a new age of Star Wars without teetering off a cliff into monotony. Finally, she makes her book about something, the mad circus that is the modern political landscape, and that’s what all good science fiction should do.

When I was a boy, I was told that anyone could become president; I'm beginning to believe it.

this blog that I bookmarked it a few weeks back. Nowadays it has become a success and it went amazing. Thanking you so much. amazon