Culling The Classics: The Wonderful Wizard of Oz 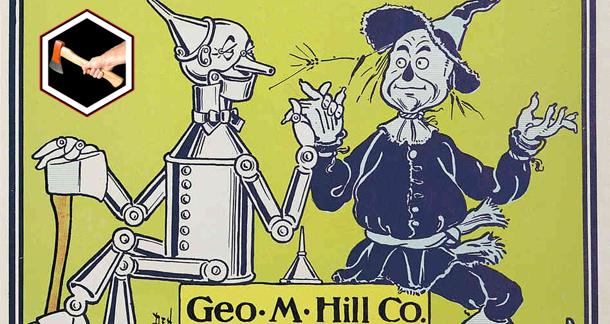 We're off to see the Wizard, the Wonderful Wizard of Oz!

2014 marks the 75th anniversary year of one of the most beloved films ever made, and...

Wait, The Wizard of Oz is based off a book? No way. Next you're gonna tell me that the Victor Fleming classic wasn't even the book's first adaptation...

Are you serious? My entire world is crumbling. Well tell me at least that the ruby slippers weren't originally silver or something stupid like that...

WHAT?! Good heavens. Best be getting on with it, then.

If you want to read your children something that will confuse them morally and really lay the groundwork for some serious mental illness later in life? Then yeah, sure, go ahead.

One of the most highly cherished and widely adapted works of American children's literature, with dozens and dozens of film, television, stage, literary, and comic versions; inspired nearly every major 20th Century fantasy creator in America, and millions more through the extremely popular and influential 1939 film adaptation starring Judy Garland; Goodreads rating of 3.96.

Okay, so a lot of the details were changed when the movie was made, but for the most part the basic story is the same: Kansas girl (and her little dog, too) get swept up in a tornado and dropped in the fairyland of Oz; a benevolent witch advises her to seek out a powerful wizard to help her get back home; along the way, she meets a scarecrow, a man made of tin, and a talking lion, and hijinks ensue.

Any hipster parent looking for a charmingly terrifying all-American fairy tale to read at the kids before bedtime will be pleased as punch by this old-timey delight that's packed with mile after yellow-brick mile of nostalgia-laced scenes and characters. And that's not all! L. Frank Baum was so devoted to this mythical world that he continued on with 13 Oz sequels and prequels, and others continued with a solid 30 more. This mythos-laden series is rich with inventiveness and colorful characters sure to inspire your children and leave them breathless with anticipation. Add in the wonderful illustrations by W.W. Denslow, and you've got the recipe for timeless enjoyment!*

This book sucks. L. Frank Baum was basically an early 20th Century Chris Claremont (for any comic book fans interested in exploring all of your favorite Fables characters, as I was): he was a fantastic idea man who couldn't write for shit. The plot is extremely episodic and random, and there's a curious kind of Oz logic pervasive to the story that's meant to be read quickly and not thought about too much. If you've got a kid who likes to ask a lot of questions at storytime, then you're going to be in trouble, because Baum isn't one to provide too many answers. Oh, and for all of you future psychopaths out there, good news! Dorothy, the Scarecrow, the Tin Woodman, and the Cowardly Lion commit several distinct genocides during the course of the book! And instead of being a loveable humbug, a sad sack whom you kind of feel sorry for, the titular Wizard of Oz is pretty much a piece of shit. Oh, and did I mention that the prose is terrible? The prose is terrible.

In all honesty, the first book, the one that I'm technically supposed to be reviewing, isn't all that bad. Baum really does build a strong foundation for an incredibly inventive magical world in Oz. If he had stopped after The Wonderful Wizard of Oz, I think everything would have been fine. The book is a little dated, and it's a bit of a slog to get through, but there's enough going on to keep a young reader shuffling through in one-chapter bursts until the end. (And to be fair, the illustrations are actually pretty great.) The problems really start with the second book, The Marvelous Land of Oz. Again, inventive settings and really cool characters—a wooden sawhorse and a stick man with a pumpkin head both brought to life, natch—but the story is terrible, the prose is pathetic, and I honestly think that Baum never bothered to read his own books after he wrote them. There are so many horrible plotholes and glaring errors in the first few books that it's just disgraceful. He seriously just made shit up as he went along without any consideration for what he had already written. The third book, Ozma of Oz, is probably the best of the bunch that I got through—it gave me enough that I at least wanted to attempt the fourth book, Dorothy and the Wizard in Oz, which was a huge mistake—but it isn't so good that it's worth suffering through that second book.

I mean, if you have to? If you really want to know what the source material is like for your favorite movie ever? If you're a Fables purist who can't stand not getting every joke and reference and allusion? If you have some kind of compulsion where you have to read the book first? If you want to read your children something that will confuse them morally and really lay the groundwork for some serious mental illness later in life? Then yeah, sure, go ahead. (It's public domain, remember, so don't buy it.)

Everyone else, read the Wikipedia page. In fact, read all of the Wikipedia pages, for all of the books. The characters are really interesting and unique (until they open their mouths), and the settings and situations are filled with this magical sense of uniquely American mythology (though without any sense of proper storytelling), so it's worth it to at least become aware of what goes down. But you shouldn't have to read the books. No one should have to read them. They are painful, and bad, and really just insane in all the wrong ways. Watch any of the three bajillion film, TV, or stage adaptations. Read a few of the comic series. Christ, play the crappy video games. Don't read the books. This is what this column was created for, to guide you in exactly these kinds of situations. You think you want to read the books. You're convinced that there's something I'm missing, something of value for you to take away from the text that you just wouldn't get from a mere synopsis. There's not; trust me. Don't read the Oz series.

I just visited the Oz museum in Wamego, KS last weekend (I didn't make the trip for that, but it was there and so was I so why not) and I had no idea how many books there were and how bananas the whole Oz universe is.  You very well may have just saved me a substantial amount of coin, because I was close to ordering all of the books.  Thanks for the heads up.

Hah! Amazing! I honestly felt the same way when I read "Ecotopia", "Neuromancer" and "Do Androids Dream of Electronic Sheep?" - massively over-hyped and poorly written (Ecotopia particularly). But superb ideas found within, particularly in the science fiction genre - if only "great storytelling" had been a major part as well...