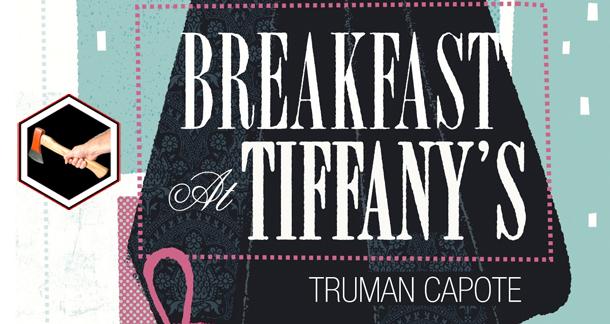 First, let's get the obvious out of the way.

Now that we're past that: Holly Golightly! The original manic pixie dream girl! Breakfast at Tiffany's was a novella before it was a cinema classic before it was a mid '90s pop-rock jam. Let's please never mention that song again.

One of the greatest and most well known works of Truman Capote's celebrated career; inspired several stage works, as well as a film adaptation starring Audrey Hepburn and George Peppard that was nominated for five Academy Awards and produced one of Hepburn's most iconic roles; Goodreads rating of 3.91 (novella + stories) and 3.79 (novella alone).

I have to say, I was floored by how solid the prose is in 'Breakfast at Tiffany's'.

In the fall of 1943, a writer in New York meets a quirky but beautiful young woman named Holly Golightly. The cosmopolitan girl makes her living by socializing with wealthy men who shower her with money and gifts. While seemingly living a rather open lifestyle, Holly is wary of anyone getting too close to her, ultimately driving those who try away.

Norman Mailer, that huge asshole, once called Truman Capote "the most perfect writer of my generation," and I have to say, I was floored by how solid the prose is in Breakfast at Tiffany's. There are three other stories grouped together with the novella (I'll get to those later), but BaT is meant to be the centerpiece—and it certainly delivers. Capote creates characters that are unique but recognizable and presents them in an unfiltered light. He doesn't worry himself over the trappings of convention, instead offering the world an interesting extended anecdote and stepping aside to let the reader enjoy it or discard it at his or her pleasure. Also, it's very different from the film.

There isn't much of a plot. There's kind of a plot, the framework of a plot, but it's almost incidental. The narrator doesn't even have a name, because everything that happens revolves around Holly Golightly; his existence is secondary to hers in every possible way. Also, it's very different from the film.

Did it seem like I was stretching to find reasons you might not like this book? There has to be something, but honestly I can't think of it. For absolutely no reason whatsoever, I was somewhat looking forward to going through life having quietly never read any of Truman Capote's works. What a moron I am. Breakfast at Tiffany's is a beautiful piece of writing. Unlike the film, everything about the novella is rather ambiguous. It certainly isn't a love story—at least not in the traditional sense. All of the great lines from the film are there, though, and there are plenty of others, too; in general the prose is fantastic.

"I've got the most terrifying man downstairs," she said, stepping off the fire escape into the room. "I mean he's sweet when he isn't drunk, but let him start lapping up the vino, and oh God quel beast! If there's one thing I loathe, it's men who bite." She loosened a gray flannel robe off her shoulder to show me evidence of what happens if a man bites. The robe was all she was wearing.

This is how our everyman narrator first meets his downstairs neighbor Holly: she brought a guy home, got tired of him, and climbed out the window and up the fire escape. From there, the story meanders along, following Holly and the seasons as she traipses around New York. It's much the same as the movie in that way, but everything about the novella is much more subtle and nuanced. Holly herself is much younger, though she acts older; there is no forced romance to keep the audience happy; Mr. Yunioshi is a much less important character (thank god), but other characters like Mag Wildwood and Joe Bell, the local bartender, play much more prominent roles; we even find out a bit more about Holly's past and future, though whether that's a good thing or not is up to the reader.

I'm going to take a brief timeout to discuss the Three Stories part of Breakfast at Tiffany's and Three Stories, because honestly, for some people it might make a difference. There are certain readers who probably love the Audrey Hepburn film and can't imagine the story any other way. Honestly, I read the book with Audrey Hepburn and George Peppard in mind, so that isn't really an issue, but for the sake of argument, maybe those people are on the fence. The three stories—"House of Flowers," "A Diamond Guitar," and "A Christmas Memory"—seem like they would be afterthoughts. I almost didn't read them. Again, what a moron I am.

I hate short stories for a number of reasons, most of them really tedious and annoying to get into, but I absolutely loved these three. They are completely without agenda, splendid works of prose that exist as beautiful scenes depicting random parts of the world. Maybe that seems boring to some, but the lack of overall plot doesn't mean that these stories lack drama and motion. The first is about a young Haitian girl who leaves her place of employment (pretty sure it's a brothel) to start a family with a young cockfighter. The second is about an old man in a prison remembering a friend from his past. The third is literally just a Christmas memory. These don't sound very exciting, but strong prose can turn any scene into a moving vista filled with color and emotion. Capote was seriously masterful at that particular skill, and the book would be worth it for these three stories alone.

Back to Breakfast at Tiffany's, though. One of the problems I've always had with the movie is that the ending seemed slightly forced. Audrey Hepburn keeps her Holly Golightly perfectly on the balance between stoic and hysteric, but the original Holly has so much more personality and depth (and you can imagine her as Audrey Hepburn anyway). This is someone who has faced serious hardship and likely suffered some kind of mental break because of it, something that the film only lightly touches upon. Holly's relationship with her past is so much more artfully rendered in the novella than in the film. This is likely a byproduct of the excellent prose, but whatever the reason, reading the novella made an already compelling character even more compelling for me.

There are certainly going to be people out there who don't appreciate Capote's prose for whatever reason, as everyone has their personal style preferences, but I was genuinely surprised by how quickly I fell in love with his writing. I was cynical going into the read, not expecting very much at all. I couldn't really imagine the novella living up to the idea of Breakfast at Tiffany's that I'd gotten from the film, the essence that Audrey Hepburn and George Peppard and the film's score and art direction and cinematography capture. Somehow, though, the novella contains a purer form of this same essence, a concentrated dose of the outspoken society girl's voice and mannerisms and overall quirky existence. Everything you love from the movie is in evidence, but even more so. It's a great book, and I'm glad I gave it a chance.

Interested? Instead of ordering Breakfast at Tiffany's on Amazon, try picking it up from your local library or from your nearest indie bookstore!

I came in here ready to do battle in defense of this collection. Instead I got to read an excellent essay. Thanks.

Little reactor is a magazine which helps you find columns about culling the classic. You can get dissertation writing service help to manage their university task easily. They are providing their new episode for breakfast at Tiffany's and Three Stories. You can also get their celebrated career stories. Join it.

Many students today are in search of dissertation help to write them a perfect custom dissertation writer, but how many of the have managed to get services from legitimate services? Hardly any, for which these services rather being a blessing in manging their dissertations in hectic schedule are making the lives of students more miserable. Here is where Crowd Content can help you.

I used different writing services and always had to correct papers on my own. But not this time when I decided to go to the website SpeedyPaper. Its writers are really amazing and hardworking.

I consider this is an informative post and it can be really beneficial and knowledgeable. as a result, I'd prefer to thank you for the efforts you have produced in writing this article.
Visit Here:https://bikersleatherjacket.com/womens-biker-leather-jackets/

With over ten years of experience servicing clients nationally, we feel we are the Top Digital Marketing Company. We use digital platforms to share your story and bind your brand to clients, boosting your company and assisting you in reaching your full online potential.