Comics vs. Television: The Umbrella Academy 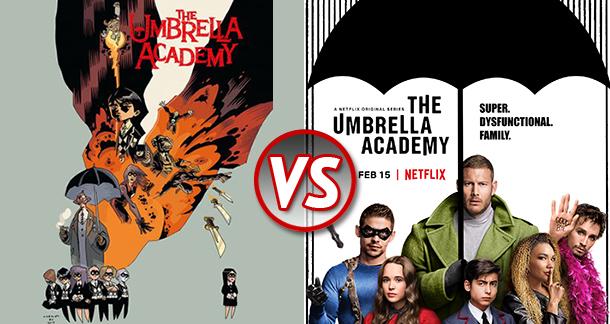 Every now and then, a comic book adaptation does the impossible. It not only translates its source material to another medium (tricky enough on its own), but actually improves upon it in almost every way. Plot holes get patched, characters get fleshed out, and dramatic tension is cranked to eleven. The original is still great, but the adaptation fixes a lot of flaws, making it more accessible to a larger audience. Netflix’s The Umbrella Academy is one of the rare instances in which I don’t feel compelled to say the book was better—the show is the best version of the story. Beware spoilers ahead for both the show and the comics.

Many have called this show a “Wes Anderson superhero movie.” It’s not an inaccurate description. If you gave the Royal Tenenbaums powers, the result would look a lot like The Umbrella Academy. The style feels like Anderson’s trademark blend of regional playhouse and bespoke storybook, and it has a penchant for pop songs, particularly as soundtrack for its most violent scenes. The Umbrella Academy is more interested in its characters and their relationships to each other than the events of the narrative. But just when it seems the plot is being neglected, it returns to complicate things so we can watch our favorite characters struggle and change and learn about themselves.

The Umbrella Academy walks a fine line between faithful and fresh, one that sends most adaptations stumbling.

The Umbrella Academy’s main advantage is being able to draw on all of the comics for inspiration. While most other superhero adaptations struggle to pare seventy years of publications down into a two-hour movie, Academy only has three(ish) volumes to spread across ten episodes. This gives the show a large foundation to build upon without being burdened by the excessive lore and continuity that commonly plague the genre. It has a more complete picture of the overall story to start from, so arcs and ideas that were underdeveloped in the original text have a chance to shine onscreen.

For example: Vonya’s transformation and the end of the world are minor, unrelated subplots in the first volume, and Number Five’s work as a time-traveling assassin isn’t really explored until the second. Connecting all of these events not only makes narrative sense, it also heightens the stakes of the story. Vonya isn’t just throwing a tantrum, she’s lashing out in frustration at a lifetime of being marginalized by her own family. Number Five isn’t just trying to prevent a world-ending disaster, but fighting against an organization actively trying to ensure it happens. The plot was never the most important part of The Umbrella Academy, but it serves the story much better on TV.

It is the characters that benefit the most from all this extra breathing room. Vonya gets to have an actual character arc where she is gradually swayed to the dark side rather than simply shanghaied. We get to see Number Five as more than a preteen killing machine thanks to his oddly heartwarming romance with a department store mannequin. The Stepford-looking android the kids call Mom is barely present until volume three, but she serves as an emotional anchor point for the television family, Diego in particular. While he is just as much an obnoxious bully as his comic counterpart, we get to see behind the mask on TV, thanks in part to the way he treats Mom with such care and kindness. He is the only one consistently worried about her welfare after the death of their father, and it is in these moments we get a glimpse of the real Diego. In the comics, he’s just an asshole to her, too. Even the deceased Ben gets to play a larger role on the show, as a ghost that haunts Klaus and keeps him connected to a past he would rather forget. Considering Klaus’ power is speaking with the dead, this addition almost feels like the correction of an oversight.

But by far the show’s biggest and best contribution to the mythology of The Umbrella Academy is the duo of Hazel and Cha-Cha. Although they appear in the comics, they are nothing more than sugar-addled maniacs that enjoy committing murder and mayhem in goofy masks. While they are certainly still that, the show allows them to become real characters with personalities, motivations, relationships and conflicts that go deeper than physical violence. But there’s still plenty of that to go around. By the end of the first season, I cared just as much about what happened to these assassins as I did their targets. I’m really rooting for Hazel, and I can’t wait to see what happens when Cha-Cha finally stops being professional.

The Umbrella Academy walks a fine line between faithful and fresh, one that sends most adaptations stumbling. The show feels familiar, a recognizable version of the original story, but just enough has changed that even a dedicated fan can’t be certain what will happen next. It is a delight for the diehard, but also an excellent entry point for the uninitiated. If a dysfunctional family of superheroes sounds interesting to you, I highly recommend you watch it.