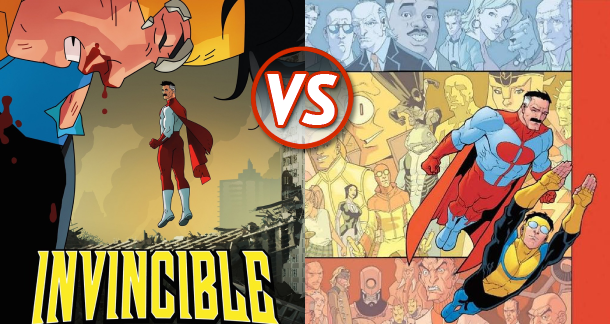 Superhero cartoons have always been a real mixed bag. For every truly timeless classic, there are dozens of glorified toy commercials. You always hope for another Batman: The Animated Series, but usually we just get cheaper, uglier versions of our beloved characters having laboriously tame, child-friendly confrontations, while ignoring all of the great storytelling that made the comic book a property worth adapting in the first place. Even the best of them are full of compromises for the censors—no matter how well-crafted any particular X-Men show is, none of them have ever come up with a good explanation for why Wolverine, a notoriously ill-tempered and knife-handed hero, never stabs anyone. Animated adaptations of superheroes are rarely made specifically for adults. There’s a few one-season wonders and some entries in the DC Animated Universe, but usually the most you can hope for is a cartoon designed for kids that’s still well-written enough to entertain older fans.

Invincible is some truly great superhero animation made explicitly for adults. The show is a heady blend of superpowered action and human drama that still has a sense of humor about itself. You don’t even need to be familiar with the source material to enjoy it. And if you are a fan, this show is a pleasant surprise, a rare gem in the harsh landscape of animated adaptations. Freed from the children’s entertainment handicap, this show directly engages with more mature themes that its predecessors would have to tiptoe around, if they addressed them at all. That doesn’t just mean bloodier fight scenes—Invincible also explores the human cost of superhero violence, and how power can impact one’s moral development.

You should really go watch it before reading on, because I will be discussing spoilers.

Usually the most you can hope for is a cartoon designed for kids that’s still well-written enough to entertain older fans.

Invincible is the kind of show you hope for whenever rumors of a new series surface—it is beautifully animated with a stellar cast of voice actors, and is true to the source material without feeling beholden to it. Few changes have been made to the narrative in order to bring it to the screen. The cast of characters has been slightly diversified, and the sequence of some events has been rearranged to better the pace for episodic television. Some alterations are just improvements, like having Omni-Man massacre the Guardians of the Globe at the end of the first episode. It not only definitively sets the tone for the show, it also amps up the tension for the episodes that follow. Every interaction between him and his family after that has much higher stakes, as we know they all have the potential to boil over into violence. We know what terrible danger Omni-Man’s family is in before they do, and it only heightens as they fumble closer to the truth. The show also gives Debbie Grayson a more active role in the story by having her suspect and investigate her husband before his big confession, which results in some of the series’ most riveting conversations. Debbie has the one power no one else does: she can hurt Omni-Man. Not with super strong punches, but with her words. That’s just one instance of the show tapping a well of narrative potential left practically untouched by the source material.

At its best, Invincible feels like someone just waved a magic wand over the comics and brought them to life. But the show does more than simply translate the story to a new medium—it takes full advantage of every opportunity afforded by this adaptation. This show contains some of the most brutal yet beautifully crafted fights in the history of superhero cartoons, expanding upon nearly every conflict. In the comics, Omni-Man’s massacre of the Guardians is presented as just a series of single-panel kill shots. The show fills in all of those bloody blanks with a battle that makes it painfully clear that Omni-Man is a monster in hero’s uniform. We learn more about his character by seeing how he fights instead of just witnessing the aftermath. His later confrontation with his son is made all the more horrifying by the show’s unflinching stare at the human cost of their family disagreement. The season finale makes it much more difficult to believe that Nolan’s redemption arc will make it to the screen, but the previous episodes inspire confidence that this writers’ room is either up to the challenge, or planning something far more interesting instead.

It’s not just the action scenes that are elevated by this adaptation. Almost every character is made more compelling by their encounter with the animators. Machine Head was nothing more than a cool art design in the comics, a talking piece of scenery forgotten the instant the cops carted him off the page. He doesn’t get any more scenes or dialogue on the show, but granted movement and a voice, Machine Head becomes a memorable background player that Amazon’s audience was disappointed to hear might not return. A similar thing happened with Battle Beast, who made such an impact in his debut bout with Invincible that the creators were quick to assure fans that the lion-headed interstellar ass kicker would get more screen time in future seasons. The show almost feels like another draft at times, putting a shine on the corners of the story left unpolished in the comics.

While Invincible is commendably faithful to its source material, it’s not required reading to enjoy the show. It’s a great entry point to a weird new world for the uninitiated, and it is also a rich feast for fans. I rarely get to say this, but this adaptation exceeded all of my expectations, and I can’t wait to see what they do next. If you enjoy superheroes at all, Invincible is a must-watch show.

Get Invincible: Vol. 1 at Bookshop or Amazon