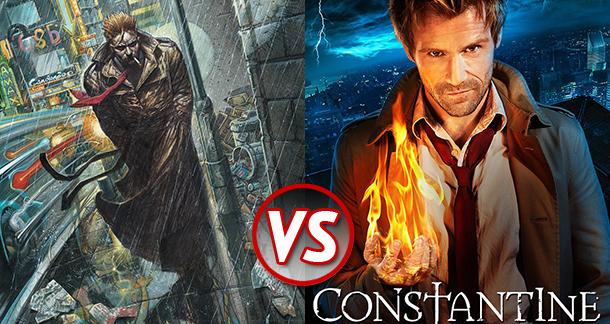 The sometimes sorcerer and full-time hustler John Constantine is one of my favorite comic book characters. But even in this golden age of comic book adaptation, I never dared hope the character would get another turn after his abysmal screen debut embodied by Keanu Reeves. Marvel may rule at the movies, but DC Comics has a long tradition of dominating on TV, from the colorful universe of the Bruce Timm cartoons to the hugely successful primetime drama Smallville, which created the template that Arrow and The Flash continue to improve upon. When it was announced that Constantine would be getting his own series, one that promised to be faithful to its inspiration, I suspected dark arts at work. Unlike most of his contemporaries, Constantine has aged in real time over the course of hundreds of issues, providing a wealth of source material for the kind of prolonged character study that a TV series can do well. It sounded too good to be true, so of course it was.

What I and presumably many other readers liked about Constantine was how unique he was in the world of comic books. Not only was he not a superhero, he wasn’t even really a good guy. But he also wasn’t some archetypal antihero whose gruff exterior concealed a heart of gold. He did the right things, but for all the wrong reasons, and he was a sanctimonious asshole about it to boot. Comic book Constantine is a con artist who can save the world with nothing but the bullshit he spouts before he finished his cigarette. Despite his encyclopedic knowledge of the subject, he rarely uses magic because he understands the danger, and also because he’s not that good at it. TV Constantine is a master of the dark arts, something he cheerfully announces as he hands over a business card. He casts spells in almost every episode as he follows a magical map around the country solving mysteries like a supernatural Sherlock Holmes, with a psychic sidekick and an angel dropping him vague hints from above.

Constantine (the show) is a serviceable translation at best: you get the gist of the story, but miss out on all the nuance.

These are two very different versions of John Constantine. On television, underneath his surly exterior is a warm gooey center that’s nice to children, polite to old ladies, sincerely apologetic when he hurts his friends, driven by guilt over a soul he failed to save, and determined to help the innocent people caught in the crossfire of the Shadow Wars. Even when he talks tough, there’s always a scene to reassure us that he’s not a bad man, and of course he didn’t really mean it. Compare that to the comics, where Constantine is an unrepentant bastard. He is equally abrasive to friend, foe or family, seeking redemption in only the most transactional sense. John’s failure cost a little girl her soul and condemned his own, and now he uses his knowledge of the dark arts to try and scheme his way back into Heaven. Over the course of a few hundred issues he has cheated death and other immortals so many times that all of his friends and family have become objects of revenge for the otherworldly nasties that have been bested by John Constantine. For the majority of the series he does as many good deeds as he can in a desperate struggle to escape eternal damnation. Doing the right thing and saving lives, well that’s just a pleasant side effect, innit?

Constantine (the show) is a serviceable translation at best: you get the gist of the story, but miss out on all the nuance. The characters are familiar and the plot is the same, but the story it’s telling is still different. Regretfully, the makers of the show have decided to change all the wrong things. For instance, every time John uses some enchanted artifact he gives a long-winded explanation of what it is and how it works. They’re not that intrusive when it’s a single word bubble on a page, but having the actor actually speak all these lines means that nearly ten minutes of each episode is just John describing every trinket he pulls out of his trenchcoat. That trenchcoat is also far too clean on TV—it looks like it was bought an hour before the shoot, rather than worn for decades by a misanthropic mage. And the fact that the show has him mostly traveling through America instead of delving into London’s occult underground seems like a missed opportunity. It also makes the whole concept look like a derivative of Supernatural, rather than one of its key influences. As an adaptation of its titular character, Constantine (the show) falls disappointingly short, worse than even Constantine (the film). The movie got it right: Constantine is an utterly execrable human being whose sole redeeming virtue is that he occasionally saves lives for entirely selfish reasons. The show gets it all wrong by presenting Constantine as a noble but flawed soul striving to hold back the darkness for the good of all. I’m going to pick on one episode in particular, as it most perfectly demonstrates how the show’s writers have critically misunderstood the original work.

The fourth episode, “A Feast of Friends,” attempts to retell the first two issues of Hellblazer. In both versions, Constantine is paid a surprise visit by a former friend from his young and foolish days. Gary Lester is a junkie who has stupidly unleashed a powerful evil and needs John’s help to put the demon back in the bottle, but that is where the similarities between the two stories end. On Constantine, after all other methods of containment fail, John ultimately decides to use his friend as a sacrificial vessel. Although he misleads him for a while about how exactly he can help, Constantine eventually tells him about his plan. Gary accepts his fate and finds redemption knowing that his death will mean something, and Constantine learns that atonement is possible. Which is exactly how you would expect a TV show to be built, as if the assembly instructions were printed on the side of the box. “Protagonist seeking redemption helps other characters find it. There is hope.” Not a bad sentiment, just not one John Constantine would share.

In the pages of Hellblazer, Constantine tricks this poor fiending fool into becoming the demon’s final feast. He doesn’t promise Gary redemption, but another fix. Gary doesn’t know he’s the bait until he’s already in the trap, and John offers him no words of comfort as he dies in agony, begging for mercy. It’s a necessary sacrifice, and it was Gary’s fault the demon was loose in the first place. Problem solved. When the ghosts of all his fallen comrades come to torment him over his cold-hearted decision, Constantine tells them to sod off. He made the right decision, so he doesn’t have to feel bad about it. That core of the character never changes—you can jump forward a hundred issues and find John choosing a soccer hooligan to die in order to keep a havoc demon from starting a riot at the stadium. Sure he felt sorry for the guy, but he was probably going to get himself and a lot of other people killed anyway. Even later, when he meets his father in Hell, he tells the old man he belongs there. No matter how deep you dig, Constantine is not a nice guy.

I’m not an idealist. As I’ve written before, some things will always be lost in translation. It’s simply the nature of the endeavor. But this is 2015. People have been adapting comic books to every other medium we can invent for over a decade now, so it should be common sense that you can get away with changing a whole lot of stuff, but the characters are sacrosanct. The character is the main draw—that’s why you put his name in the title. And if fans sit down to watch a show called “Constantine” and instead get a generic forty-three minutes of “Brit Bloke: Paranormal PI,” they’re going to call bollocks. I understand that television needs to be a little formulaic in order to function, it’s just that they chose the wrong formula. Arrow and The Flash are shows about men making the world a better place. Hellblazer was always about a man making the best of a terrible world. The show Constantine stumbles along awkwardly between the two, like a child trying on his father’s coat. Hopefully, like Arrow, it will get much better in the second season. If not, then some angry nerd out there sold his soul for nothing.

I love Hellblazer, and I really like Constantine. It's not the same at all, but I didn't expect it to be. Any time I hear a television producer or filmmaker claim they will be faithful, I call bullshit. TV and film are too formulaic these days to allow such a thing. I agree totally on the differences between the characters. Honestly, the fact that Constantine is a total asshole made me skeptical that it would ever make it as a television show. The first couple of episodes, I was concerned that it was just another monster of the week production like Sleepy Hollow turned in to. I think Constantine has actually gotten better as a show as it has gone on, and I like the actor, but it's never going to capture the comic book character of Constantine, which I figured would happen, just based on the title of the show.