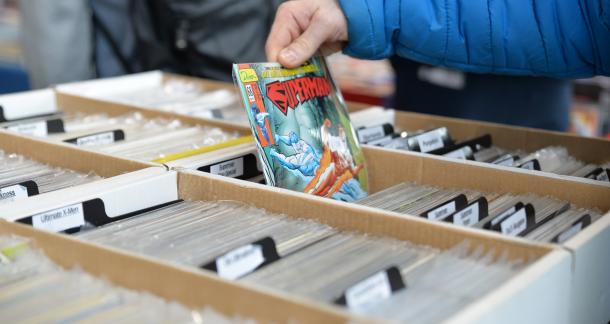 My first comic convention was not amazing, spectacular, or any of the words that have come before “Spider-Man” in a comic title.

All the people I would come to know as Denver-area convention regulars were in attendance. There was the guy in the homemade Spawn costume. On the plus, the costume looked pretty damn good. On the minus, it was extremely hot, so he spent 99% of his time at cons sitting in a folding chair, breathing hard, sweating with the mask off, his skullet dripping with sweat. There was the mustachioed guy who sold comics from a stand and always brought his two kids. The kids were ALWAYS screwing around, he was ALWAYS yelling at them, and he once sold a buddy of mine a Hulk reprint for a bad price, a crime for which he’ll never be forgiven.

The only con activities were browsing and buying comics. If you were lucky, you might get a signed book from someone who made a comic in their basement, ran off some copies at Kinko's, and showed up to the con.

Cut to a decade later. Denver gets a comic con. Like a real one. A big one. Fewer comics, but more celebrities, more stuff to do, more merch!

Cut to another decade later, to now. In 2019 Denver Comic Con officially changed its name to Denver Pop Culture Con. And although the name change sparked some discussion, the truth of the matter is that the con has been leaning pop culture for a while now. At least the new name is honest.

What happened to comic conventions that were about comics? How did things get this way? Is it a good thing or a bad thing? Why?

How Did Things Change?

More of an answer? Fine.

Until the early 2000’s when we got X-Men and Spider-Man movies that were pretty good (hyphens in the title are key. Make a note!), there wasn’t a whole lot of celebrity to be found at a con. You might see the dude who did the voice for Space Ghost, or perhaps J.D. Salinger’s son (who played Captain America in the 90’s!), or a nice but exhausted Lou Ferrigno selling signed pictures of him as the Hulk or flexing through a posedown in a banana hammock. Maybe you’d have some Star Trek crossover and see Marina Sirtis or Jonathan Frakes, but for the most part, you were lucky to get one big celebrity guest. Stan Lee, for example.

In 2002 the only people who gave a rip about Stan Lee were comics nerds.

It’s hard to say when the change started, exactly, but I’d say it was around the time comic book movies started getting good/popular. Around the time it wouldn’t be weird to take your girlfriend out to see a comic book movie because you were seeing something that wasn't goddamn embarrassing, Thor instead of Elektra (I’m sure a lot of you are harrumphing about that, but if you saw 2005’s Elektra...you’d agree with me).

The mainstreaming of nerd culture hit comics hard, but it hit comic cons even harder. And with the widening appeal of nerd culture, con organizers figured out they could make a ton of money by bringing in celebrities, even if their connection to the world of comics was tenuous. A small part of the world wants to meet John Romita Jr. (for the record, these are the people who are objectively correct and the people worth having a beer with). Everyone and their mother wants to meet Daryl from The Walking Dead. Seriously, check out the Facebook pictures during con season. You’ll see Daryl, you'll see everyone, and you'll see everyone's mothers.

Do You Even Read Comics, Bro?

This year’s Denver Pop Culture Con website featured a short explanation of why they were bringing in prose authors as a group of guests:

How about scores of authors, participating in almost 200 hundred hours of panels and presentations, about everything from the craft of writing to how they think up all those amazing stories!

Let me just engage in some nerd rage for a second.

I spent a career fighting against the idea that comics aren't books. Comics ARE books. What do books have that comics don’t? Comics have characters, they have plots. They have Chip Zdarsky writing them!  Comics have pictures! Doesn’t that mean comics are Extra Books? Books+?

Isn’t this the person who complains about the hamburger at a sushi restaurant?

I don’t support the person who is coming to the con and looking down their nose at comics. And why would a con specifically cater to anyone who feels this way? Isn't it unreasonable to show up to a comic con, as someone who doesn't like comics, and say, "Where's the stuff FOR ME!?" Isn’t this the person who complains about the hamburger at a sushi restaurant? Isn’t this the person who’s like, “I want to go to the pool, but I don’t want to touch the water or be close to it”? Why would we try to bring people who have no interest in comics...to a comic convention?

Don't be fooled by the nerd stereotypes. The idea of bringing more people into the comics fold is definitely appealing to me. I'm not trying to wall off comics fandom. I want to see more people reading comics. That said, I wouldn't mind seeing comics fandom be about...comics. It was nice to have cons where one could sort of assume that anyone else there was not too good for comics.

Cons, like most other pieces of nerd culture, have been grabbed up by nerd culture bandwagoneers. And it's not even the fact that people are showing up late to the party. I've got no problem with that. Hell, I was late to my own high school graduation. The problem comes when people show up late to a costume party, make fun of the people who chose to wear costumes, and try to convince everyone else to go back to their regular clothes.

Some nerd rage is about things that can exist in harmony. At the risk of invoking the name, Ghostbusters 2016 didn’t destroy Ghostbusters 1984, and being mad about it is a waste of time. But in this case, comic cons have been overrun and erased by the financial and cultural juggernaut that is pop culture cons. You want to go to an honest-to-goodness comic con? Good luck finding one.

Naming your hopes is a dangerous thing.

I hope that the pop culture con will die, leaving behind the kernel that was the comic convention. I hope this not because I want the pop culture elements to die or because I wish those fans any harm, but because I have an affinity for comic conventions. I have an affinity for fellow comics nerds. I want to meet the writers and artists who make comics, not so much the actors who put on a goofy suit, a fake accent, and 35 lbs. of muscle. I can think of better uses of my cash than spending it to take a picture with someone who most definitely looks like the person who would call me a dork in high school because I was super involved with Grant Morrison's JLA run.

I like comics. Not comic book movies. Not sci-fi television. Comics. And I'd love to go to another convention that caters to that interest someday. I'd like to meet other people who share that interest. Okay, some of them smell REALLY bad, but most of them are cool, and at least we have something in common.

I have reason to think it might happen. The first set of Marvel movies has come and gone, and it wouldn’t surprise me if the superhero movie has peaked. The Walking Dead comic is over, and the show can’t last forever.

There are some convention organizers who recognize the need. One of the organizers of Spring Con in Minneapolis said:

We are a comic con. We don't do media guests...We are kind of purebred in that way. We are here to provide the comics industry opportunities to interface with the public. There is kind of a fight going on for the heart and soul of the whole thing. A lot of conventions have forgotten the girl who brought them to the dance, so to speak, which is the comic geek.

The same year this guy was quoted, their con attendance was up 25% even though a larger-scale con happened in the same city two weeks prior.

With the glut of large-scale cons meant to please everyone, the next logical step is to see the emergence of smaller, more specific cons. In order to survive, cons will have to get more niche, more specific, more specialized.

Naming your hopes is a dangerous thing. Because when you give your hopes a real shape, it's really clear when they aren't met.

But I say fuck it. I hope that comic cons come back. I hope they get really niche, weird, and fun again. 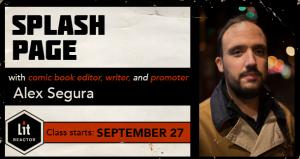