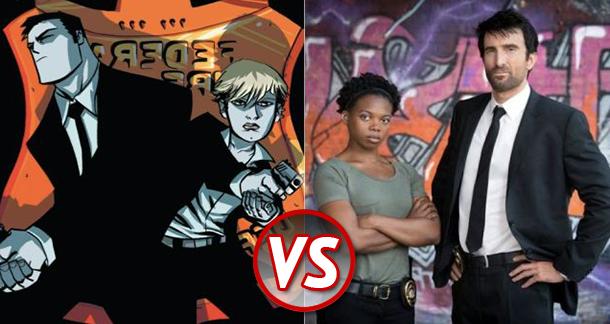 Superhero adaptations are all the rage these days. So much so that the movies are no longer big enough to contain them all, and they are spilling into primetime television with increasing regularity. The latest to get the small-screen treatment (courtesy of the PlayStation Network) is the Eisner-winning series Powers, created by Brian Michael Bendis and Michael Avon Oeming. The TV show and the platform carrying it have debuted to mixed reviews, and it has a lot more competition from the likes of Arrow and Agents of SHIELD than it would have if FX had managed to get it off the ground as they originally planned. But as always, what I’m interested in is how it stands up to its original source material. In that arena, I’d call Powers a moderate success. (Beware, for there be spoilers beyond this point.)

Both versions of Powers present a story of superpowered heroes and villains told from the perspective of ordinary cops on the ground doing their best to protect normal people in a world that frequently doesn’t make sense. As you might expect, it can be difficult to investigate crimes committed by people who don’t even obey the laws of physics, much less city regulations. That’s where the “Powers Division” of the police steps in, cleaning up the messes left in the wake of the extraordinary. Both iterations of Powers excel at world-building, integrating superhero mythology into the police procedural and celebrity culture in a way that feels both cleverly and disgustingly real. Mario Lopez dishes all the latest powers gossip on “Extra”, there’s a “Powers That Be” television show reminiscent of VH1’s “Behind the Music”, and a fantastic scene where superheroine Retro Girl (portrayed by the always captivating Michelle Forbes) tells her agent she’s not putting on her classic costume for a photo op because the media will focus on dissecting her look rather than paying attention to the charitable foundation she is trying to promote. Powers skips over the very tired trope of origin stories and doles out exposition sparingly as it drops you into a world where superhumans are not only commonplace, but have been for some time. There are ordinary people who have grown up never knowing a world without powers, and not all of them like it. This growing unrest between the powers and the powerless drives much of the narrative in both versions.

Despite it’s shortcomings and liberties taken with the source material, Powers is still a fairly entertaining hour of television, and watching it will not spoil the books if you still want to read them.

While the show and its inspiration share the same basic premise and direction, they develop the story in very different ways. At a glance the dissimilarities between the show and the comic are immense, but not necessarily in a bad way. Of course, there are those for whom any change is sacrilege. When the show was announced and the first publicity shots were posted, upset fans were quick to drench the web with their complaints because the actors looked very different from their beloved comic characters. But since the comics were drawn in a very blocky, minimalist style reminiscent of a Bruce Timm cartoon, this is the easiest change to forgive. Real human beings just don’t look like that.

The most obvious changes are the sequence of events, and the roles of many of the cast. While the comics are set in motion by the murder of beloved superhero Retro Girl, on TV she is alive and well as one of its most intriguing characters. Michelle Forbes plays her as a formidable woman who knows that her true power is about more than being superhumanly strong and able to fly. She is determined to use her fame and image to accomplish real good in the world, and would rather rescue civilians from a typhoon than spend her time punching supervillains through buildings. TV’s Retro Girl is a master class in how to portray a woman who is both tough and vulnerable—she doesn’t hesitate to go toe-to-toe with the most feared man in the world, but is still brought to tears by the fact that she can’t save everyone.

Instead of her death, the show begins with superheroes dropping dead from a new powers-enhancing drug called “Sway,” manufactured by the devious teleporting gangster Johnny Royalle. Although he was barely a bit player in the comics, on the show Royalle (played with relish by Noah Taylor) is the most dangerous kind of villain: one who is convinced he’s the hero of the story, and that his every dastardly deed is done in service to a greater good.

Arguably the character most improved by the transition from paper to screen is the enigmatic man-eating Wolfe, who was all implied mystery and menace that ultimately met a vague and unsatisfactory resolution in the comics. Eddie Izzard once again gives a stunning performance as a psychopath in a cell, breathing an unsettling amount of life into a villain who is just as charismatic as he is dangerous, able to manipulate his adversaries through erudite speeches and mind games when he’s not ripping them apart and devouring them with his bare hands and teeth. Making him the erstwhile mentor to a generation of young powers gives him a much more interesting role to play in the story than simply being the boogeyman in a box.

But the biggest divergence between the show and its source material is found in the main character, Detective Christian Walker, a former superhero who became a cop after losing his powers in his final battle with his arch-nemesis. In the comics Walker was an immortal hero tired of battling evil throughout the ages, who actually welcomed the chance to live a normal life and doesn’t admit, even to himself, that he misses his powers. But even though he can no longer fly or shrug off a hail of bullets, Walker doesn’t know how to stop being a hero. On the show Walker (played by a Sharlto Copely who hasn’t quite mastered his American accent) is the typical grizzled veteran cop who doesn’t want a rookie partner, a sad sack who is deeply depressed about becoming a shadow of his former glorious self. This take on the character is actually more interesting and relatable, as most of us at some point will know what it feels like to deal with a disappointing life change, while sympathizing with a guy who got bored being awesome at everything forever is a bit more of a stretch. Hopefully this means that Walker’s totally cliched backstory from the comics has been jettisoned completely, as that storyline was easily the weakest of the entire series.

While successful with the characterizations and drama, the adaptation still falls short of its source material in one very important way: the powers. In the comics, when superpowered people collide the resulting battles are illustrated with all of the colorful energy you would expect to find in anything published by Marvel or DC. The show rarely exhibits the abilities of its namesakes except in short scenes or from afar, and that seems to be because the producers are working with 1990’s caliber CG effects. Every time someone has to do something more complicated than fly, it looks shockingly cheap. Triphammer, the series’ analogue for Iron Man, wears a suit of armor that looks more like a child’s Halloween costume than an advanced piece of military hardware. Powers throw fireballs and lightning bolts that barely look more realistic than what we saw in the original Star Wars. When Retro Girl and Wolfe finally face off during his daring escape from prison, what should be an epic clash of titans instead looks no different than the fisticuffs you would find in an episode of any other cop show on TV, utterly deflating all of the wonder they spent five episodes building up. The writers had done such a good job of making their fictional world feel like a real lived-in place, and it was sad to see it undermined by thirty seconds of poorly choreographed brawling. And now that Daredevil has raised the bar for TV fight scenes, Powers’ middling attempt looks all the more disappointing by comparison.

Much like the teenage wannabe superheroes on the show, Powers has a lot of potential. They’ve already done most of the hard work: the characters are interesting, the world is fantastic yet believable, and the drama is well-written and engaging. It’s most glaring flaws are primarily cosmetic and technical,  things that can hopefully be remedied with a little more cash and commitment in the second season. Despite it’s shortcomings and liberties taken with the source material, Powers is still a fairly entertaining hour of television, and watching it will not spoil the books if you still want to read them.