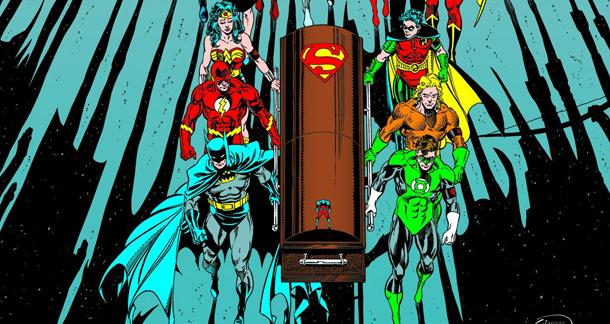 We all want to read a story that can surprise us. Every time you open a book, you do so in the hopes that it will be at least different enough from everything else you’ve read to be interesting. Even when we read the same kinds of stories over and over again, we do so with an appreciation for the variations of the familiar form. Often the most damning criticism one can offer an otherwise brilliant piece of writing is that it’s been done before, thus lessening its value. Perhaps that explains popular fiction’s recent obsession with twist endings. In a culture where every story is available in a plethora of versions and interpretations, it becomes difficult to tell the difference between the inspired and the derivative. Are you writing something original, or are you just grafting a twist ending onto a thinly veiled remix of an already popular story? One of the best ways to learn about plot twist abuse is to study a form where it has become not only common, but standard practice: comic books. Below we will explore several types of plot developments which are now no more unexpected than the rising of the sun.

In a culture where every story is available in a plethora of versions and interpretations, it becomes difficult to tell the difference between the inspired and the derivative.

How many times has a valiant hero finally felled the foul villain only to discover at the last minute it was only an elaborate proxy, so finely detailed it was indistinguishable from the real thing until destroyed? This tactic is typically used to explain why such incredibly powerful characters can be defeated time and again without losing any of their intimidating gravitas. It’s also pulled out in last ditch efforts to shake up stories that were spiraling into boring and predictable patterns. The number one abuser of this tactic is Doctor Doom, who has been pulling the robo switch on the Fantastic Four ever since issue five. Some fans even theorize that Victor Von Doom himself has never actually appeared in a comic book, letting his Doombots do all the work. As a matter of fact, he does it so often that “Actually A Doombot” has become the accepted term for this exact plot device on discussion boards throughout geekdom. There’s even a TV Trope page about it. While having a character turn out to be someone or something else can be an interesting development, the robot ploy is rarely foreshadowed in any way and is really used as an excuse for why the villain is still at large despite the epic thrashing he just received from the hero. If one of your characters is really in disguise or impersonating someone else, don’t wait for the last page or people are just going to call your big reveal another Doombot.

The butler/reporter/spouse/obscure character that hasn’t been used since the 70s did it.

Who could have possibly perpetrated a bizarre and heinous crime? You’ve followed the hero as they have diligently followed every lead, chased and discarded every red herring, and interrogated every suspect, but you’re still no closer to knowing whodunit. That is, until a random third act confession or a deus ex evidence reveals that it was, in fact, some background character who hasn’t had five lines since chapter three. No wonder you never saw it coming! DC Comics is particularly guilty of overusing this twist—at least half the Batman stories of the 90s revolved around returns of forgotten villains. While you want your ending to be a surprise, you don’t want it to be unbelievable. Then it seems as if the writer had no idea who the killer was until he wrote the last page. Even if it’s not the case, that’s what it will seem like if your big reveal has no prelude. It’s great if the ending is unexpected, but not if doesn’t make any sense. The very best mysteries seem utterly incomprehensible when we first encounter them, but make perfect sense once their secrets are laid bare. Ideally, once the reader finds the answer to your mystery they should be able to look back and realize that all the clues were always there, they just didn’t see them. Brad Meltzer actually turned this tried and true device on its head in an interesting way in the superhero murder mystery Identity Crisis, which partially makes up for DC’s affinity for returns of once popular characters.

The Death of [Insert Character]

Despite his superhuman effort, our noble hero has finally met his match on the field of battle. There is only one way this can end, and our hero does not flinch when making the ultimate sacrifice to save all. Ever since Superman made dying cool in the 90s, every superhero and villain looking to regain their relevance has died. It says a lot about us that stories about the deaths of our favorite characters outsell tales of their living adventures by a wide margin. Even people who had never read a comic book in their life wanted to see how the Man of Steel finally bought it, and editorial staffs have been killing off major characters to boost sales ever since. It works, because characters who have lived such spectacular death-defying lives will naturally only come to their end in the most epic of conflicts. (All except Captain Marvel, who in an interesting twist on the superhero death, passed away quietly in his bed from inoperable cancer.) The problem is this ploy has become so overused that it has diluted the impact of death in comics. No one really believes a flagship character like Batman or Captain America is going to stay dead, and it’s hard to feel any sense of loss when Jean Grey dies for the tenth time. Death may not be permanent in fiction, but it should still at least be meaningful. Which brings me to our last problem…

The Resurrection of [Insert Character]

The inevitable follow up to the best-selling “Death of…” story is the obligatory boring and convoluted resurrection story. These are rarely as interesting as their predecessors, since the protagonist is dead for the majority of the story. There is little action, and it usually centers around new or secondary characters no one cares about. Most of the pages will be flashbacks to the highlight reel of the deceased hero’s career, and what pages aren’t will be filled with all manner of technobabble and mystic mumbo jumbo to explain exactly how our hero will rise again. It’s incredibly difficult to invest much interest in a long and detailed technical description of a bullshit process made up to explain why a character has come back to life when we already know it’s to continue selling stories. It’s kind of obvious why Superman came back to life, and it has nothing to do with a Kryptonian rejuvenation chamber. And since we already know the ending—our hero lives again—there is absolutely nothing at stake. So it all boils down to a lecture about fictitious science simply to justify a new costume design for a character. It’s not that I have anything against characters coming back, but the story of how the feat is accomplished is always dull tripe.

These are just a few of the most abused plot twists out there. Be sure to mention your favorites and point out which ones I missed in the comments.

Dwayne from Cincinnati, Ohio (suburbs) is reading books that rotate to often to keep this updated March 14, 2013 - 10:28pm

X kisses Y as huge reveal without build up.

A new writer, who seems to want to take fanfic erotica to a professional level, reveals every comment between two characters has been them flirting for years. This often includes ignoring the people who have been flirting with X or Y for years.