Collaborating with a Dead Hero 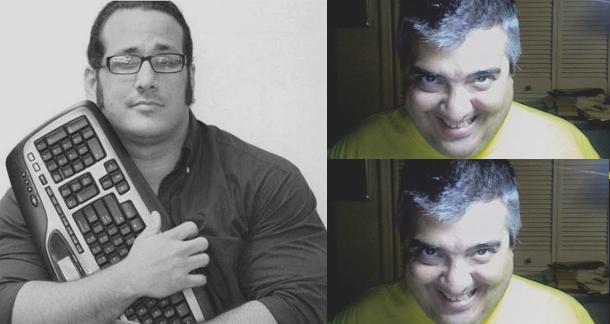 I never thought I would collaborate with a horror giant whose career affected my own. In fact, I never thought I would collaborate with anyone. Collaborations are weird. They've always struck me as the kind of thing you only do with someone you've been friends with for years. In the case of late horror maestro J.F. Gonzalez, he collaborated with other amazing horror writers who also happened to be his friends, namely folks like Brian Keene, Mike Oliveri, and Wrath James White. Now imagine my surprise when I was asked to collaborate with him. No, wait. I'm getting ahead of myself. Let's go back for a minute. Yeah, let's go back to the moment it all started...

It was late 2017 and I was, for some bizarre reason, on the phone with horror superstar Brian Keene. Besides being one of the hardest working writers in genre fiction, Keene is also a huge supporter of indie presses and a man who constantly opens doors for new writers. For example, he asked me to collaborate with J.F. Gonzalez posthumously on a horror frontera project he had titled The Crossroad. Keene is in charge of Gonzalez's estate, and he has been finding the perfect collaborator for each unfinished project. This one aligned perfectly with my particular brand of bloody, supernatural border mayhem, so I was asked to do it. So yeah, just like that I had an email with five documents pulled from Jesus' computer. Among those were copious notes in which he basically wrote through his own questions and ideas. Here are the things that happened next, and the thing I'm working on making happen now.

I have to write the fuck out of this thing as a tribute and a thank you and a step forward in my own career.

I was amazed and incredulous

The first thing I read were Jesus' notes. They were a mixture of plans, questions, and plot ideas. "Brainflash!" is something he wrote when a strong idea came, and then he proceeded to tear into it like a ravenous animal to make sure it held up. The man was a perfectionist. He cared about plot and characters. A lot. Getting to see his process at work amazed me. It taught me things about writing. It showed me the level of attention he gave to details. I made me imagine the amount of work that went into creating modern horror classics like the Clickers series, Survivor, Hero, They, and The Killings. I couldn't believe I'd landed such a gig.

Writing my own books is one thing, but touching the work of someone as respected as Gonzalez is a different story. Sure, getting the nod from Keene and Cathy Becker Gonzalez filled me with pride and joy, but what if I fucked up? What if his fans dislike my work? What if I fail to take his chunk of story in the right direction?

His death started hurting in a new way

When Jesus lost his battle with cancer in late 2014, I was already plugged into the horror scene. I was sad in that general way we get sad when someone whose work we enjoy dies. Jesus had inspired me to pursue writing as a brown man, and for that I was thankful. However, I had never met him. We had never shared a beer or hung out at a convention or even spoken on the phone. However, getting an intimate look at his work and his process gave me the sense that I was getting to know him as a man. I will never have what his friends had with him, but I got much more than most of his fans got, and that made his death feel fresh. It hurt. He was a dedicated, talented author. He was a beloved family man and friend. Fuck cancer.

I had a chance to write a letter to Jesus. It was published in Clickers Forever, an outstanding tribute anthology. However, that letter was not enough. After panicking and hurting for a while, I started to think of ways to make Jesus' work and my own work meet out in the desert and party in pools of blood while screaming ancient curses. I began to realize that making this book an outstanding addition to his catalog was the only real way to thank him for inspiring me. Writing a hell of a novel would be the only way of truly thanking Cathy and Brian for allowing me so close to Jesus' memory and their hearts. The fear dissipated like fog under a mean Texas sun. I understood that I can't try. I can't do a decent job. No, I know what I have to do: I have to write the fuck out of this thing as a tribute and a thank you and a step forward in my own career.

You see, sometimes in life a strange dream you didn't even know you had comes true, and you have to take that opportunity and hustle hard to make it a great thing. And that's exactly what I'm going to do. Wait for it and you'll see.