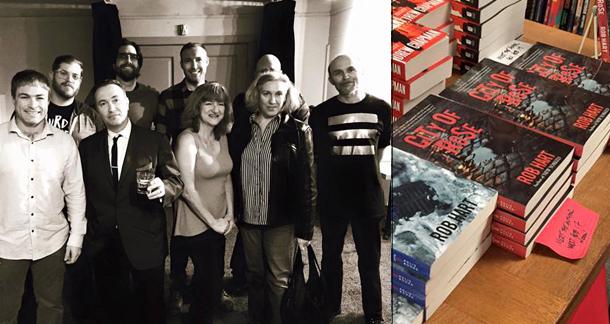 My second day in Seattle, I went to a laundromat because I am bad at packing and was out of clean socks and would soon be out of other forms of clothing. After that I got a really awesome burrito at Rancho Bravo and found a few copies of my books at Elliott Bay Book Company—which was pretty awesome—and signed their stock. Then I got some ice cream at Molly Moon’s, because I am a sucker for fancypants ice cream.

The place was packed so I had to step outside to eat. It was raining pretty hard so I stood under an awning and for the first time on my tour—five days in—I got a little sad.

I don’t really know many people in Seattle. It’s an unfamiliar town and here I was in this warm, well-lit ice cream parlor where people were laughing and socializing and enjoying each other’s company, and there was no room for me. Standing out in the rain made me miss my wife and daughter a lot.

Not to say that Seattle was a bummer. Far from it.

Noir at the Bar

A few years back, AWP was in Seattle, and LitReactor hosted a party along with the Booked. Podcast and Writer.ly at the Hotel Sorrento. I booked my room for this trip at the Hotel Sorrento without making that connection. I only did it because it was close enough to both venues that I could walk. So it was nice to get there and find myself someplace familiar.

My first night there was Noir at the Bar at Hugo House, a funky little venue that drew a nice crowd. Back when I was scheduling the tour and I knew I’d be hitting Seattle Mystery for a signing, I messaged Michael Pool, who organizes Seattle Noir, and he very generously offered to put me on the bill for an event he’d already scheduled.

It was a great night. I almost prefer Noir at the Bar readings to solo events. First, I don’t like being the center of attention, at anything. Noir lets me get up, read a story, get done, and then listen to some other people. Plus, it’s easier to draw a crowd when you’ve got a bunch of local writers harassing their friends to come out.

I was happy to read with Michael, along with Johnny Shaw, Linda L. Richards, Dietrich Kalteis, Will Viharo, Sam Wiebe, Kat Richardson, and Owen Laukkanen, many of whom I was meeting for the first time. Jim Thomsen took that nice snap of us above.

It totally highlighted my favorite part about the crime fiction community: Everyone is real damn nice. Crime writers get it out on the page, so when it comes time to party, everyone’s really kind and welcoming.

The night ended with me and Johnny Shaw back in the Sorrento lounge, where I had one more drink than I needed.

I’ve never been to Seattle Mystery Bookshop before, so it was a hell of a thing that they invited me out. I walked down from the hotel, my ears popping from the change in elevation (Seattle made me miss my flat city), and I met with LitReactor instructor Joshua Mohr for a cup of coffee before the event.

He very kindly accompanied me to the signing, at which I sold a couple of books and signed some stock and had a good time with the owners, JB and Amber, both of whom were incredibly kind and welcoming. They’re running a fundraising campaign to support the store and you really ought to consider giving them a little something: It’s a nice place, and they’re good people.

This was also a good example of how bookstore events can be a little tough for an out-of-town author. I got lucky in Portland; I know enough people there I was able to get a little more than a dozen people out to Powell’s. I think I sold five or six books in the hour and a half I was at Seattle Mystery.

Of course I wanted to sell out every copy they had. Of course I wanted to pack the place. But that’s not realistic. I have no real audience to draw on, outside my friends and family, none of whom live in Seattle. And bookstores don’t generally have built-in audiences that flock to every event, regardless of who's appearing.

But it’s not really about big numbers up front. It’s about meeting the booksellers, making new friends, signing those books so they’ll sit out with a ‘signed by the author’ sticker on them. It’s about the long game. Even though a lot of people didn’t come through the door while I was there, JB and Amber said I was welcome back. To my mind, that means it was a success.

And, hey, if you're in Seattle and want to get a signed copy: Head over to Seattle Mystery. Tell 'em I said hi.

My last night in Seattle I was tucked into my room, finishing edits on South Village, which is due to my publisher at the end of the month. After a little while of sitting in bed I got bored so put on some pants and went down to the lounge. The Hotel Sorrento has a nice lounge. Wood paneling, lots of couches and comfy seats, and a fireplace.

There was not a soul there. I dug myself in next to the fireplace and got myself a bourbon and made it through a few more chapters. It was warm and comfortable, and at that moment I was able to enjoy the solitude of a fire and a drink and some editing.

It was a great stop, and I remain completely in awe of the fact that I even get to do this.

The next day it was off to San Francisco. More on that soon.

It's interesting to hear a balance between the dates of your book tour, the difference of the town where you know people, to the town you don't. Thanks for continuing to share.