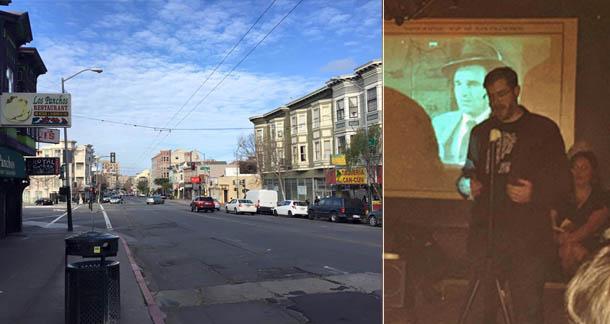 The San Francisco leg of my tour included a pretty big milestone: I finished the final draft of my third novel, South Village, and got it off to my publisher. Earlier than I intended, too.

South Village is due March 1, and my plan was to finish and file by the flight home. But between the amount of time I was spending on planes and in airports, and the huge chunk of free time I had in Seattle, I blazed through it.

I finished the book sitting at a friend's kitchen counter. I feel pretty good. We'll see if that changes after Jason gets done editing the book—but as for right now, I feel good. It was a nice way to round out the trip. Especially because the San Francisco leg almost didn't happen.

Seattle, Portland, and Los Angeles were set. As long as I was on the West Coast I wanted to hit San Francisco, since I've got some friends there.

My publisher tried for some bookstore events and we got shut out (which happens). So I poked around in the crime community and Joe Clifford expressed interest in setting up a reading, since I was wandering the coast at the same time as Owen Laukkanen and Johnny Shaw.

It got a little hairy—it took him some time to find a venue and almost didn't happen, and I was holding off on booking my flights until it got settled—but he came through, setting us up at Iron & Gold. Johnny had to bail for a personal reason, sadly, but it was still a killer lineup: In addition to Owen, there was Joe, Tom Pitts, Danny Gardner, David James Keaton, and William E. Wallace.

For all these West Coast Noirs, I've been reading a flash fiction story that's 628 words. I picked it for three reasons:

I don't like reading from City of Rose, even though that's the book I'm promoting. It's hard to get a good chunk of a book that sounds good as a standalone reading piece. My books don't really have the cadence of a live piece, and I'm not a fan of doing a lot of set-up, because I feel like that can get confusing for an audience. Especially an audience that's been drinking.

I'm also a big fan of keeping it short. I think live reading audiences have a short attention span (again, with the drinking) and the longer you read, the easier it is to lose them. I don't like going longer than eight minutes, and when people ask for reading advice, I tell them 10 should be the outer limit.

Though, at the same time, David James Keaton read for 20 minutes, and it was funny and engaging the whole way through, so what do I know? Guys like him and Johnny Shaw are also more natural performers, and their work is just readable. Johnny talks about 'joke density', that you have to get a laugh every second or third line, and that's what he aims for. Keaton is in that range, too. Neither of them ever get boring, whereas I still spend my time in front of the microphone trying not to puke.

A big part of live reading is playing to your strengths. And I think my strength is to get up, make 'em laugh a little, and sit back down.

Overall, it was a great event. Great stories all around. I mailed three copies of City of Rose to Joe and I sold three copies. I left happy.

A little help from my friends

After staying in hotels in Portland and Seattle, it was nice to crash with friends in San Francisco. Hotels are fun—I don't have to wear pants! there's usually a bar right downstairs!—but there's something comforting about staying with people. Actual hospitality, versus the over-eager, manufactured hospitality of hotel staff.

Plus, you know, it's free. Book tours are expensive. I'm lucky enough that my publisher picked up a portion of the trip, but not all of it, so some savings here and there were helpful. Hopefully the savings will mean less crying when I check the balance on the card I use for business expenses.

(Which reminds me: I need to collect all my receipts into one place...)

The first night in San Francisco, I stayed with Joe Clifford and his family. It was kind of him and his wife to put me up, considering their son had an ear infection. They're a few towns over from San Francisco, with a big beautiful view of the bay and the bridges and Alcatraz. It was nice to end the day sitting on the deck and drinking beers, talking shop with Joe.

In the morning, after a kickass breakfast at a nearby diner, I hopped on a train into the city, to stay with Lisa, one of my wife's closest friends, and her husband Cory. I dropped my stuff at their apartment, got a killer burrito at The New Spot, and got to work.

Once again, I was being shown an abundance of kindness—they were moving to a new apartment the next day. But I think I earned my keep by helping them box up the kitchen and, the following morning, load boxes into the car before I set out for the airport.

Staying with them was exactly what I needed: I'd been on the road for seven days by that point, and while I had spent time with a lot of friends, and met a lot of cool people, Lisa is a person I know from back home. Her parents live right up the block from where I live now. Even though I was far from home, being there felt familiar, and that was comforting.

I got to the airport a little early on Saturday morning and used that time to pick up some gifts for my wife and daughter. And then it was off to Los Angeles, the final stop of my tour...