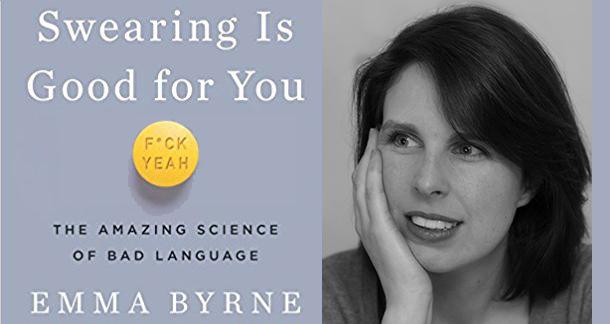 The US edition of Swearing is Good For You has a beautiful cover. Silver grey with an enticing yellow pill on the front, which is incised with the words F*UCK YEAH. That asterisk is called a grawlix, and it’s the only one in the book. Every other swear word is written in full. It would have felt disingenuous to me to do otherwise, but I knew it was potentially controversial.

For example, this autumn, just before it due to be published in the UK, Philip Pullman scandalised certain segments of the British press for having included some strong words in his latest book. “By his own admission,” swooned the Daily Mail, “some of [his] fans are as young as seven.” Pullman’s use of “bollocks,” “bastard,” and “fuck” was deemed to be wholly inappropriate.

By immense good fortune, I was given the space to publish a scientifically based riposte in the Guardian. Not that Philip Pullman needs a recently debuted popular science author to defend his use of those words — but the science of strong language is fascinating. Swearing is a boon to our societies and our species, helping us withstand pain, forestall violence, and bond together. It is so fundamental to language that even chimpanzees who are taught sign language and potty trained invent their own swearing. Research also shows that swearing triggers strong emotions in the hearer and the speaker. As a result we can only use it well if we have a sophisticated theory of mind that allows us to empathise with the effect our words will have. What’s more, swear words are uniquely placed to intensify emotion and diminish pain.

Swearing is a boon to our societies and our species, helping us withstand pain, forestall violence, and bond together.

As fascinating as this science is, it’s not for me to say what words Philip Pullman should and shouldn’t use. That would be the definition of hubris. Every fiction writer, responsible for constructing worlds and the people who inhabit them, has the duty of deciding what words are and are not authentic in the minds and the mouths of their characters.

Swearing is so emotive, and so pervasive in our language, that depriving characters of the freedom to use this part of language is akin to forbidding the use of an arbitrary list of adjectives or nouns. In fact it’s worse — while we can find near synonyms for many other words, swearing can’t be substituted. Research shows that “minced oaths” — the fudges and sugars — just don’t work on our brains in the same way as the real thing. They don’t relieve the urge to tic for sufferers of Tourette syndrome, and they don’t kill pain for any of us.

When it comes to swearing in fiction, art is its own defence. If your character would swear in this particular set of circumstances then it is inauthentic for them not to. One of the most famous defences of this position came from Charlotte Brontё, writing as Currer Bell, in the preface to Wuthering Heights.

“A large class of readers…will suffer greatly from the introduction into the pages of this work of words printed with all their letters, which it has become the custom to represent by the initial and final letter only,” she wrote. “It is out of my power to apologise; deeming it, myself, a rational plan to write words at full length. The practice of hinting by single letters those expletives with which profane and violent persons are wont to garnish their discourse, strikes me as a proceeding which, however well meant, is weak and futile. I cannot tell what good it does — what feeling it spares — what horror it conceals.”

While it’s not my place to offer a scientific justification for artistic discretion, the research supports this position entirely. Swearing is emotionally and expressively unique, and part of what makes us human. Fiction would be the poorer if it were never used.

Emma Byrne is the author of a fucking awesome book, Swearing is Good For You: The Amazing Science of Bad Language. She has written on science, language, and society for the BBC, Science, the BMJ, the Financial Times, and Forbes. She lives in London.

Swearing is an organic part of communication, especially in the stressful situations.

I doubt the need to ban swearing, like some countries try to do. They should check a reliable source first, instead of making quick decisions.