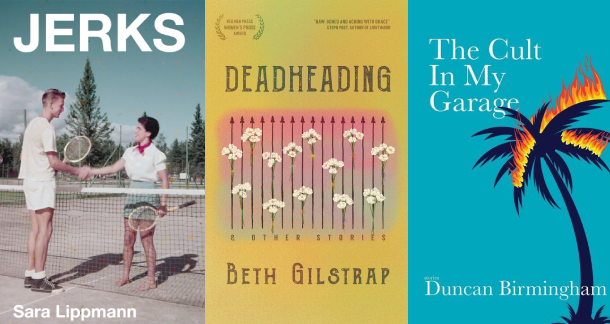 And look, there is a lot more than this sentiment going on in the superlative short story collections Deadheading by Beth Gilstrap, The Cult in My Garage by Duncan Birmingham and JERKS by Sara Lippmann, but I keep coming back to it anyway.

That first night while we sat around the porch with drinks and fancy pickles, I could have been more sympathetic as the sun set and Steve's face fell like a sad pup listening to the litany of everyone else's achievements. I could have squeezed his hand, trailed my fingers along the slope of his neck as it blotched red with envy. I could have strummed the lobe of his ear and said: You are plenty. You are more than enough.

But I'm his wife.

I know how loaded this comment is. I could be talking about anything. COVID, for most of us certainly, and the way it continues to envelope and warp every conversation, event, hope and possibility. But it doesn't have to be COVID or COVID alone. There are so many challenges right now. Well, it feels like there are, and does anyone really want to dispute that?

It also sounds like an annoyingly random, not very thoughtful surface-level laundry list of shit I read about in the paper this morning.

However, we're approaching the end of a year, and possible the end times, and there's so much suck. Big suck. Lots of suck. Social issues, climate shit, too many guns, world-wide terrors of all kinds. I'm not here to make anyone feel any better either. I don't have any solutions or ideas. Or maybe I do. Would they make a difference though? It doesn't feel like it.

I'm the all-around utility man. "Meet Bruce," I imagine my agents pitching me to employers. "He's been around the block. He's good in the room."

I which we could, but I don't know, and yet, we still have art, thank God, movies, music, theater and writing.

It's cliche to say what a salve and solace art is, but it is, and we don't need to argue about that either. We know that. And so I read, I always read, always have. I found it harder to read in 2020, which I've written about here, and this year it's been easier. In taking care of myself in ways not involving reading, more rituals, more sleep, more structure, finding some rhythm and yes, peace, I've been liberated to enjoy reading again. I haven't read enough this year, but I've read more, I've enjoyed myself, and I've written about that here as well.

What I'm also interested in today, however, is a conversation I once had with my mother. It was about some problem I was having. I was bemoaning that my problem, whatever it was, relationships or work or parenting or money, pick one, seemed so trivial in the face of whatever was happening in the world at that time.

She responded by saying, when one has a problem, it is the most important problem in the world at that moment and needs to be recognized as such. I've found myself repeating that a lot this year, to myself, and others. There's so much guilt about feeling pain, anger and sadness around shit that feels so insubstantial in comparison to real stuff.

There's room for all of it.

He passed by his hammock, though he wanted to stop and nap, and went inside to clean for her. She didn't care much about a clean house but he wanted her to feel comfortable. He wanted her to see how it reflected who he was separate from everyone else—how he'd finally made his own way.

Which brings me back to the three short story collections I want to highlight and ruminate on today: Deadheading by Beth Gilstrap, The Cult in My Garage by Duncan Birmingham and JERKS by Sara Lippmann.

A good book review would tease out the craft in these stories and the themes, how things hang together. They would also seek out some quibbles, nibbling at the edges of the work to bring you some light criticism about what’s otherwise outright celebratory. I suppose I can do that too.

But what I want to focus on are three wildly different collections that keep circling back to the same theme:

The characters in these stories can't, and if we're not the better for learning why this is as humans, we are as readers. These are not stories about COVID mind you, it's just that some are, "Non-Essential Workers" (The Cult In My Garage) and others feel like it, "Runner’s Paradise" (JERKS). What these collections have in common, though, are the characters' nearly complete inability to find some peace, at least rest, much less success, happiness, promise or contentment.

When one has a problem, it is the most important problem in the world at that moment and needs to be recognized as such.

Gilstrap's characters cannot escape their battles with poverty, much less the violence and men who populate the world they live in. These are stories about people trapped by circumstances they were born into and the world they grew-up in and now cannot quite escape

Lippmann's characters are haunted by the promise of the tidy and good life that was offered if one were to follow the rules and paths already illuminated for them. Her stories reflect the lives that accompany the good schools, jobs and apartments available to her privileged characters, but are no less susceptible to real world realities than any other.

And Birmingham's characters are aware that the big dreams they hoped for, if not believed were available to them, are not going to happen, not fully anyway. His stories are primarily focused on the world of Hollywood and entertainment and all it holds holy, though only for the few, the lucky, the beautiful and the young.

All three collections are strong in their totality, which is not always the case, and all have stories that stuck out to me, and lingered for different reasons, all of which are probably selfish and self-serving:

"No Time For Losers" from JERKS, is a crushing distillation of how relationships warp and fold in on themselves in a cloud of bong smoke, reality television, children, sex and lost hopes.

"Good in the Room" from The Cult In My Garage, a wonderfully sad deconstruction of how we stay too long, or try to, in situations that we no longer understand, want us or belong in.

"Ain't Nothing But Fire" from Deadheading, an end of life tale, where some calm might yet be found, but it's hard earned, and only at a distance from life as you've known it.

You'll read these stories, I hope, and experience them in the ways they feel lived in. Real and sad, but with small moments of triumph. You'll see that I favor the stories that speak to how we fall short of what we want, that we get in our own way in achieving whatever might be, or have been possible, but that at times, much of the time, we also don't clearly see the limits that have been placed in front of us. We all want more and we want to believe it's all possible. We're rarely prepared, though, when things fall apart.

Why can't we get some peace?

Because sometimes it's all too much.

Lately it's been a lot.

For all of us.

Still, while it all may feel so hard these days, we still have art, and we still have these writers, and sometimes that's enough.

Get Deadheading at Bookshop or Amazon

Get JERKS at Mason Jar Press

Get The Cult in My Garage at Bookshop or Amazon

This covid is just awful, so many problems from him! As a plastic surgeon here with my cosmetic practice, I observe just unimaginable things around !

Your article is interesting and well-written; the information is useful and grabs people's attention.Thanks 1v1 battle

I have the same opinion as you, this issue has a lot of conflicting opinions. if you do not have difficulty, In your spare time, do you often play games to relieve stress? try gartic phone