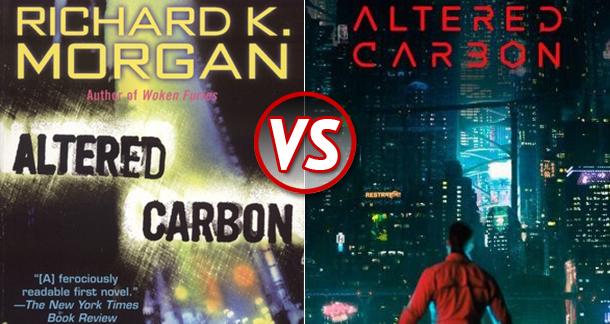 I first discovered Altered Carbon in a book review. It was a different time—I read the review in an actual newspaper and then travelled to a physical bookstore, where I used cash to purchase a paper and ink copy of a novel, a sentence that seems surprisingly antiquated and arcane as I type it. This book accompanied me on a flight to New York, and as soon as I finished reading it, I flipped back to the first page and started again. By the time my second reading had concluded, it was one of my favorite sci-fi novels. A well-worn copy enjoys a permanent place on my bookshelf, always within easy reach when a friend asks for recommendations. In fact, if you for some reason haven’t read it yet, you should go do that now, because I’ll be headed deep into SPOILER territory soon.

For the record, no one was more excited than I when Netflix announced a ten episode series. And while the show has more than its share of shortcomings, it is an ambitious and frequently entertaining adaptation.

Both versions of Altered Carbon are noir whodunits in a dystopian cyberpunk world. Thankfully, the most interesting idea in the book survives translation to the screen. A technology called the cortical stack has made it possible to digitize, copy, and broadcast human consciousness like any other data. People are able to change bodies like suits of clothes, a process called “resleeving.” While this miraculous advancement has enabled humanity to conquer death, it has also made life a purchasable commodity. The wealthy can afford to keep backups of their consciousness and keep downloading into new bodies for centuries, but a murder victim might get sleeved into a middle-aged drug addict because its all they can afford.

While the show has more than its share of shortcomings, it is an ambitious and frequently entertaining adaptation.

The show is a bit more dramatic in its depiction of the life economy. A family in the resleeving facility complains that their seven year-old daughter has been sleeved into an old woman, and Kristin Ortega can only afford to sleeve her grandmother into whatever body is available once a year for Christmas, while the obscenely wealthy Laurens Bancroft has so many bodies he can’t keep track of them all. He is so wealthy he can afford to let one die in a ritual of performative sacrifice on a regular basis, and so powerful he can get a married couple to fight each other to the death for his amusement by simply promising them new bodies. Even in the novel, Bancroft’s contract with Kovacs is so aggressively generous that it is impossible to refuse, even though the terms essentially make him Bancroft’s property. The protagonist, Takeshi Kovacs, analyzes bodies mechanically, by make and model number, breaking down their specs and weak points. He is just as dispassionately objective about his own sleeve, often lamenting its inferiority to modern combat models the same way one might discuss the obsolescence of an old truck. Both versions of Takeshi Kovacs are Envoys, fearsome warriors and infiltrators with Matrix-level combat ability in the real world, trained to adapt to any battlefield in any body.

From there, the stories diverge quite a bit. On TV, the Envoys are a Luddite terrorist group fighting against digital immortality. History remembers them as villains, and Kovacs is often referred to as the Last Envoy. In the novel, the Envoys are a corps of super soldiers under UN command. They are regarded as persons of mass destruction, capable of effecting regime change on a global scale. Envoys are so scary that they are forbidden to operate on Earth, and barred from holding any position of authority in the Protectorate. The Envoy Corps still exists in the book, and its soldiers are still a real threat feared by UN citizens, not some half-remembered fairy tale. It not only makes Kovacs more dangerous, but also the world of the story, dangling the possibility that our antihero could meet his match, or worse.

The show’s most notable improvement on its source material is the cast of secondary characters. Those that appear are given a lot more depth and play a bigger part in the story. It not only gives someone for Kovacs to explain the plot to, but also makes them feel like real people rather than interactive narrative objects. The plight of the Elliot family was a minor inconvenience to Kovacs in the book, while their suffering— personified by the mother sleeved in a man’s body and the disembodied daughter receiving virtual therapy for real life trauma—was a major source of motivation in Netflix’s version. The female characters were also granted larger roles and more agency on television. Lizzie Elliot still begins the story as a victim, but learns self-defense and regains her confidence so she can eventually overcome those that violated her. Detective Kristin Ortega accompanies Kovacs as a partner, kicking her share of ass and saving his life just as many times as she is rescued, refusing to be sidelined for her own protection even after losing her arm. The show’s best contribution to the canon of Altered Carbon is Poe, the eccentric, humanity-obsessed AI that runs the Raven Hotel. Ironically far more vibrant than his literary counterpart, the Hendrix, Poe’s enthusiasm for all this cloak and dagger business is infectious. When he ultimately meets the fate of all loyal sidekicks, I found myself saddened by the death of a hotel. Here’s hoping we get to meet more intriguing AIs in a future season.

Toward the ending, Altered Carbon (the show) tries a little too hard to tie up every loose end. Almost all the major players in the story have some kind of personal connection to Kovacs. The villain isn’t just a sadistic crime lord, but also his wayward sister. Kovacs didn’t just join the Envoys, he was trained by their founder, Quellcrist Falconer, who also turned out to be the inventor of cortical stacks and his long-lost true love. The vast universe of the story becomes a lot smaller when every major event in its history can be tied to one family. Novel Kovacs is a cynical ex-soldier who knows just how little difference his actions will make, but he acts anyway. On TV, Kovacs is practically the Chosen One, nobly saving the world from a class of immortal overlords. I sincerely hope season two doesn’t see him fighting Martians.

As adaptations go, Altered Carbon is serviceable. It seems the ideas and characters of the novel were all successfully resleeved into a television format. The story is close enough to the original and well told—I don’t recall any episodes that felt like the filler that bloats some of Netflix’s other series. The show distills a labyrinthine whodunit into an hour of sci-fi action in a Blade Runner style city, one that will keep you entertained even if you lose sight of the plot.

Great article, thanks for sharing. I like to read a book first and only after that to watch a film. It is kinda check and compare my imagination to the most relevant to the author`s (or maybe film creator`s). But I catch more details from a film than from a book, once I needed to write an essay about racism, so I decided to describe examples from literature. But it was easier for me to remember cases from films, also I used this https://studydriver.com/racism/ service, so I could write a great essay. And what you prefer?