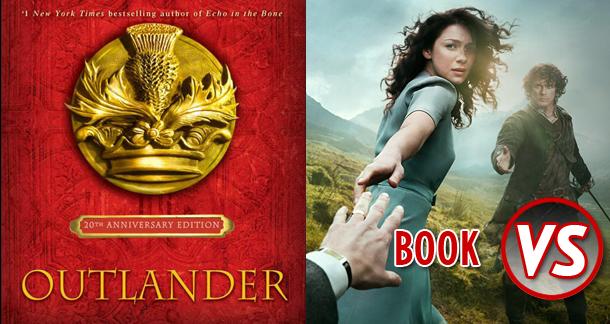 Disclaimer: I’ll try not to divulge anything that would outright ruin the reading or viewing of Outlander, but I will discuss mild spoilers in this column.

Fans of any best-selling book series are a choosy bunch. On one hand, they eagerly anticipate the release of film and television adaptations of their beloved, so they can continue to live in the worlds they identify with and see their favorite characters brought to life. On the other hand, they’re convinced nobody can do justice to the stories they have come to love. Never was this more evident than when Starz announced they were bringing an adaptation of Diana Gabaldon’s best-selling Outlander series to television.

Fans have been waiting for a worthy adaptation of Outlander for over twenty years, and the discussion about who would play the plucky heroine Claire Elizabeth Beauchamp Randall Fraser and the swoon-worthy Scotsman James Alexander Malcolm MacKenzie Fraser (better known as Jamie) was lively and heated. Would she be tall, with enough spirit to bring Claire to life? Would he be handsome, and for goodness sakes, what about the red hair?

Thankfully, with Executive Producer Ronald D. Moore (Battlestar Galactica) at the helm, prayers everywhere were answered. A faithful advocate would be bringing the books to screen. Moore states:

I'm very excited to have the opportunity to bring these books to life. Diana Gabaldon's created a rich and textured world filled with intriguing characters… I think we'll make something that the millions of fans of these books will enjoy and recognize as Outlander.

Not only was it his mission to stray true to the spirit of the books, he made Gabaldon an active consultant, resulting in a product that is absolutely faithful to the source material, but also creative in treading new ground.

It began with the well established source material as a guide and does a wonderful job of bringing Gabaldon’s richly depicted world to life.

So, how did the premier stack up to a book so beloved by its fans? Let’s take a look at some of the elements of the story and see how it all played out.

From the very first moment, the series captured the spirit of the novel in a very immediate way. The first episode is titled “Sassenach,” which fits perfectly with the overall theme and spirit of the books. You see, Sassenach means “Outlander,” which is what the people of Scotland call the English, and most importantly, it is how Jamie refers to Claire, with great affection. Since the novel is written from Claire’s point of view, and it is very much her own story to tell, it is most fitting that the premier would carry her moniker. It leaves no question as to whose story is being told.

Moving straight into the opening, the narrative begins simply with the first line of the book, read in a voice-over by Claire herself. “People disappear all the time.” The novel is very much a story of disappearance, as 20th century war nurse Claire Randall finds herself transported through time, landing in 18th century Scotland. You can’t get any closer to the source material than with this opening, which bodes well for what is to come.

Speaking of Claire, her role is played by Caitriona Balfe, who is given ample screen time. The premier did a wonderful job of capturing her interminable spirit, from the first depictions of her working as a combat war nurse to flashbacks of her childhood, growing up next to her archaeologist Uncle Lamb. Her dialogue is ripped straight from the pages of the book, where she is witty and foul-mouthed. Balfe transforms completely into the lead character in the moment we hear her trademark curse of “Jesus H. Roosevelt Christ,” and then again when she indignantly asks Captain Jack Black Randall “who the bloody hell are you?”

A good portion of this first episode is dedicated to the developing relationship between Claire and her husband Frank, played by Tobias Menzies. The two have been separated for five years by the war and are on a second honeymoon in Scotland, trying to reestablish the intimacy of their marriage. The episode beautifully captures the early hesitation between the two characters so wonderfully described in the novel. It is important to establish Claire’s obvious love and affection for Frank in order to set up the future conflict she struggles with in falling in love with Jamie, and the episode does due diligence in establishing that relationship.

As for Jamie, the role is played by Sam Heughan, and he is introduced much later in the episode in a way that perfectly matches the novel. Claire discovers Jamie with a shoulder torn from its socket, and she uses her nursing skills to put it back into place. Just like in the book, there is a connection between them, but it is not overt. There is no love-at-first-sight here, but instead a relationship slowly built on mutual respect. Fans of the novel know that a torrid love affair blossoms from these initial moments, but the episode mirrors the books in establishing a slow, steady burn.

This brings me to my next point. The novel is not a quick read by any means. Gabaldon does a wonderful job of rendering the world of 18th century Scotland with rich descriptions, but it often takes pages to set a scene. The series premier matches the languid, steady pacing of the book perfectly. No scene is rushed, from panning the lush scenery of the Scottish countryside (no CGI here) to the dreamy love scenes between Claire ands Frank. This episode takes time to tell a story, and spares no expense with beautiful cinematography in doing so.

A major component of the book is the time travel aspect, and the show did a wonderful job of giving that scene the gravity it deserves without being overstated. I worried that the actual moment that Claire fell through the stones would be a hokey, overdone montage of past and future, but it was instead a weighty moment that felt suspended in time. Just as in the book, Claire compares the feeling of falling through time with the sensation of being in the passenger seat of an out-of-control vehicle, and the images that go along with the voice-over narration are compelling.

As a longtime fan of the Outlander series, I’m pleased with the start of the long-awaited television adaptation. It matches the book in tone and style, yet leaves room for interpretation. I worried that it would turn right away from the narrative of the book, but it began with the well established source material as a guide and does a wonderful job of bringing Gabaldon’s richly depicted world to life.

What did you think of the premier episode? Do you think it bodes well for the future of the series?